how childishly you're behaving

I want to get into talking about Deborah Tannen’s Genderlect Styles, but it’s hard to map it onto The Mirror Has Two Faces. Gregory is hardly the stereotypical male that Tannen talks about, nor really is Rose the stereotypical female that Tannen talks about. Tannen’s male wants status—meaning he wants the score that comes from having bedded a woman. Gregory is far from that, wanting anything but the score. Tannen’s female wants connection, but Rose gets the connection and wants more...

The question is—and this may just be a reiteration of my attempt to define the successful relationship the other day—does a connection include or preclude sex? 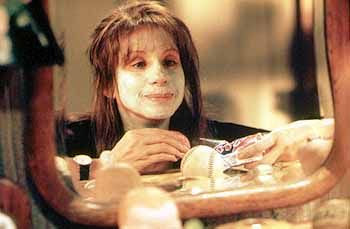 The weird thing is, as I’m looking at Tannen’s (1990) piece in the Washington Post—”Sex, Lies and Conversation; Why Is It So Hard for Men and Women to Talk to Each Other?“, I’m realizing that I am more of a male than I might have thought. I mean, I had six older sisters and thus spent a lot of time around females growing up, I was a stay-at-home dad for years, and have never had an interest in some of the more (supposedly) masculine things like sports or cars or whatever. But, the way Tannen describes men and women... I’m far more the male, and some of the emergent problems arising between men and women were definitely present between my wife and me.

Before I get to an example, let’s backtrack a little. Tannen writes of male-female communication as being, effectively, cross-cultural. This arises because of childhood socialization (Tannen, 1990). Essentially, boys playing together have one set of “organizational structures and interactive norms” and girls playing together have another. For girls,

intimacy is the fabric of relationships, and talk is the thread from which it is woven. Little girls create and maintain friendships by exchanging secrets; similarly, women regard conversation as the cornerstone of friendship.

Notably, Gregory not only focuses on conversation for his connection to Rose, but also to his friend Henry. The two of them don’t play sports together; they are seen briefly at a bar where baseball is playing on the television, but the focus of the scene only barely suggests that they are watching the game. Rose’s relationships with her sister, her mother, and her friend Doris are defined by conversation—which is appropriate for their femaleness—but then she enjoys watching baseball.

The expectation that comes when those little girls grow up and become women, Tannen tells us, is that a woman expects her husband to be a new and improved version of her best friend. In The Mirror Has Two Faces, Doris is seen early in the film, but disappears for a while when Rose and Gregory are married, only to show up again after Rose has left him.

“Bonds between boys can be as intense as girls’,” Tannen writes, “but they are based less on talking, more on doing things together. Since they don’t assume talk is the cement that binds a relationship, men don’t know what kind of talk women want, and they don’t miss it when it isn’t there.” This wasn’t my problem, I don’t think. And, it is certainly not Gregory’s, or Harry’s.

Interestingly, Tannen describes the way men and women (and boys and girls) arrange themselves when talking to friends of the same gender. Men and boys will sit next to each other, women and girls will sit facing each other. This is demonstrated in The Mirror Has Two Faces as well—one of the few times the film frames Gregory as particularly masculine; compare Gregory and Henry sitting next to each in the bar scene to Rose and Doris sitting across from each other at Claire’s wedding reception or their lunch late in the film. A man might appear to not be listening because he’s not, say, making eye contact, but he may be paying close attention to what a woman is saying. Another difference in childhood that leads to miscommunication as adults is that boys switch topics often while girls will speak at length on a single topic. An adult female, then, might think a man isn’t interested in what she is talking about when he might simply think that particular topic has been covered.

And, I realize I’ve been wording this so far as if it’s a defense of the males here, but this stuff works both directions. Going back to that last example, for instance, a man might think the woman isn’t interested in what he wants to talk about because she keeps returning to the same topic instead of moving on to his new one. The confusion could be his or hers.

The big one that I think definitely applies to me and my ex is “listener-noise.” Tannen cites linguist Lynette Hirschman’s findings that women make more—noises “such as ‘mhm,’ ‘uhuh,’ and ‘yeah,’ to show ‘I’m with you’ [while men] more often give silent attention.” Even still, I will get text messages from anyone, not just females, and I won’t feel everything needs a response. I got the message, thanks for the info, I’m moving on. But, then I learn someone wanted a response. Or, when we were together, my wife would say something and expect a response but my thing a lot of the time was that, if it wasn’t a question, there was no obligation to respond. Doesn’t mean I never would respond, but sometimes I wouldn’t, and that probably made it look like I didn’t care

The Mirror Has Two Faces uses an instrumental version of Ray Charles’ “You Don’t Know Me,” a song featured in Groundhog Day as well, and its lyrics encapsulate the issue between men and women...

There’s a hint of the friend zone there as well.

There is hope, though. Tannen explains:

The communication problems that endanger marriage can’t be fixed by mechanical engineering. They require a new conceptual framework about the role of talk in human relationships. Many of the psychological explanations that have become second nature may not be helpful, because they tend to blame either women (for not being assertive enough) or men (for not being in touch with their feelings). A sociolinguistic approach by which male-female conversation is seen as cross-cultural communication allows us to understand the problem and forge solutions without blaming either party.

Once the problem is understood, improvement comes naturally...

Women who feel abandoned and deprived when they husbands won’t listen to or report daily news may be happy to discover their husbands don’t adapt once they understand the place of small talk in women’s relationships. But if their husbands don’t adapt, the women may still be comforted that for men, this is not a failure of intimacy. Accepting the difference, the wives may look to their friends or family for that kind of talk. And husbands who can’t provide it shouldn’t feel their wives have made unreasonable demands. Some couples will still decide to divorce, but at least their decisions will be based on realistic expectations.

Figuring out a problem exists is an important first step to solving (or avoiding) that problem in the future. Rose is, on one level, wrapped up in her looks, and is hesitant to marry Gregory on his terms. Had she expressed as much rather than simply asking how she could marry someone she hasn’t kissed, maybe they never would have gotten married and would have instead remained friends, or maybe they could have renegotiated before getting married rather than months later.

But, really, there’s another problem at work here. Just like with When Harry Met Sally...—which ended differently originally, remember—Hollywood just cannot handle the idea of men and women being friends. They have to be lovers as well. Gregory Larkin may have had a noble goal, but he exists within a film, so he never stood a chance.