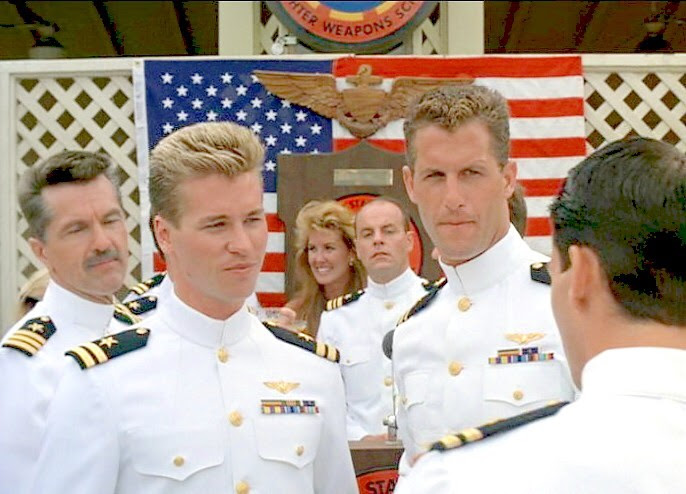 I don't know if Rambo had an effect on military recruitment, but Top Gun definitely did. Enlistment spiked after Top Gun was released--BLANK estimates BLAH BLAH--and recruitment tables were even set up outside movie theaters to answer inquiries from young men who had just seen a feature-length, blockbuster commercial for the Navy. The Washington Post reports:

During production, the Pentagon worked hand-in-hand with the filmmakers, reportedly charging Paramount Pictures just $1.8 million for the use of its warplanes and aircraft carriers. But that taxpayer-subsidized discount came at a price--the filmmakers were required to submit their script to Pentagon brass for meticulous line edits aimed at casing the military in the most positive light. (Sirota, 2011, August 26)

Salon--same author, actually--quotes "public relations expert" Nancy Snow: "Propaganda is most effective when it is least noticeable... In an open society, such as the United States, the hidden and integrated nature of the propaganda best convinces people they are not being manipulated" (quoted in Sirota, 2011, March 15). This Salon piece grabbed my attention right away because I could relate. Here's the opening paragraph:

Let's be completely clear: I did not consciously know I was a devout militarist in 1988 at the young, impressionable age of 12. When I ordered my G.I. Joe Snowcat tank to indiscriminately fire one of its six missiles at the Cobra soldiers who so often held my LEGO city hostage, I didn't think that if this were real, it would probably leave a smoldering pile of blood and limbs and innocent victims. All I thought was: Awesome!

Other than I don't think I had an entire LEGO city--because I wouldn't have enough LEGO blocks for something that big until I was an adult--that paragraph fits me to a T. I had that Snowcat, even.

One more bit from Sirota (2011, March 15) before I move on from him; he also quotes (from a Variety piece in 1994) "the Pentagon's official Hollywood liaison"--

And I've already got to interrupt, actually, because just the idea that the Pentagon had... has an official Hollywood liaison should bother us. A good portion of our country gets offended when Seth Rogen compares--

(and let's be more honest than he was afterward; he was totally comparing them)

--Clint Eastwood's Oscar-nominated American Sniper to the propaganda film seen in Inglourious Basterds, but do they bat an eye at the idea that the Pentagon probably had some level of script approval on that film, too. Just gotta remember, it's not propaganda if it's our propaganda. Then, it's just good ol' fashion entertainment. Top Gun is not a big-budget advertisement for the Navy just because it's budget was effectively subsidized in part by the Pentagon, which gets it money from hardworking American's wallets... American's who's sons and daughters run off to join up after watching Maverick and Goose and Iceman and Hollywood fight the bad guys. Hell, it's actually vital that we not know who pilots the MiGs in this movie. The faceless enemy--that's the best propaganda we've got, because the faceless enemy is so damn easy to hate and to fear and to want beaten in a firefight. I'm reminded of Fiske (2002). "People typically seek other people who are similar to themselves being comfortable with others they perceive as members of their own in-group," Fiske writes. "From comfort follows, at best, neglect of people from out-groups and, at worst, murderous hostility toward out-groups perceived as threatening the in-group" (p. 123). The point is that we so instinctively seek out those similar to us that not avoiding those different seems unnatural and is virtually impossible under normal circumstances. Sure, it's often the strange and exotic foreigner that we avoid (read: fear and hate and probably wouldn't mind a bit of our military venturing around the world to kill). But, the unknown... And I swear that, for nearly 30 years I have simply assumed the MiGs were supposed to have Russian pilots in this movie; that's how exactly so much of the Military-Entertainment Complex propaganda of the 1980s had me brainwashed. Our Cold War enemy was Russia. Maybe we fought in Korea and Vietnam, but ultimately the enemy was Russian. So, this movie could avoid actually, you know, offending Russia and causing a reaction, while having we impressionable audience members just know in our hearts, those are Russians, those are Communists. The unknown can be anybody. More importantly, the unknown can be somebody. It can be exactly who you want (and expect) it to be.

Fiske writes: "People often attribute the out-group's perceived failings to their essence" (p. 125). This is pretty much the opposite of the message at the end of Rocky IV (in theaters only about half a year before Top Gun, mind you), that we can actually change... or rather, that the enemy can change. Our impulse is to assume that whatever is wrong about the enemy is something that cannot be changed, cannot be explained, and certainly cannot be excused. In American Sniper, for example, we don't need to hear that maybe that Iraqi sniper has his own wife and kids at home waiting for him to come back from a mission he probably feels just as righteous about as Chris Kyle feels (in the movie) and felt (in reality) about his mission. We just know that our guy is our guy, so his story is all that matters. I was talking about this today with a fellow grad student, actually, about how remarkable it was that Eastwood, so often very one-sided in his films, made Letters from Iwo Jima. I suggested--though I do not think it would happen--that there was room for Iraqi Sniper here.

Top Gun is not about war, not about the Cold War. There isn't even an antagonist. Maverick manages to be his own worst enemy... which is actually an amazing detail for an action-oriented film. I mean, Martin Riggs was easily his own worst enemy, but his movie still had an antagonist, so that Riggs' destructive prowess could be targeted outside himself and in nice, neat Hollywood style, that would miraculously cure his depression. John Rambo is not so obviously his own worst enemy; he has real reason to complain. But, for a guy content to stay in prison because, "At least in here, I know where I stand," he quite readily turns his... rage and bitterness outward. Hell, unlike Riggs, Rambo doesn't even get better in the end. The fact that he attacks Murdock like he does is proof that killing all those Communists did not satiate his rage. Riggs and Rambo have external foes to help them focus. Maverick does not... until after he gets over his shit. The climax for the audience may be the dogfight with the MiGs, but Maverick's climax comes earlier--

(And, I don't mean while "Take My Breath Away" is playing.)

His ability to stick with his wingman in that dogfight is not him learning to play well with others, it is proof that he already has. His struggle is internal, and it is still promoting the military because that is the place Maverick gets to show his stuff and be a man. But I digress.

Where was I? Ah, quoting the Pentagon's official Hollywood liaison, Phil Strub. "The main criteria we use" to approve a film for support is "how could the proposed production benefit the military... could it help in recruiting [and] is it in sync with present policy?" (quoted in Sirota, 2011, March 15). And, as I type that, I look up and the end credits are rolling and I see:

SPECIAL THANKS TO THE SECRETARY OF THE NAVY--THE HONORABLE JOHN F. LEHMAN, JR.

THE PRODOCUERS WISH TO GRATEFULLY ACKNOWLEDGE THE COOPERATION AND SUPPORT OF THE U.S. NAVY AND THE FOLLOWING INDIVIDUALS:

And, that's a good way to end. Thank the Navy for Top Gun, top notch entertainment that lets us know how we can be awesome.