Complicate things a bit: 3. outsider Rambo is an outsider in this second film but is even more an outsider in the first (being the hippie-looking drifter), the third (being the white guy among all those Afghan fighters) and the fourth (white guy among Burmese, this time). But, more importantly, John Rambo actually represents an entire class of outsiders, Vietnam vets who came back from war to find the public turned against them.

4. divinely sourced Rambo is merely responding to circumstance in First Blood but here in the second film, he is definitely sourced by someone above him. Kozlovic does not demand the source be literally divine.

4.5. miraculous birth A new category I want to add to the scale, but this is a weird time to include it. Rambo's literal birth is not an element in the films. Bell-Metereau (2010) points out what could be construed as a birthing scene in First Blood; she compares the "slimy tunnel" full of rats to Freuds' vagina dentata--I would suggest this plays a little like Clover's (1992) "terrible place," womb-like. In this film, Rambo emerges (read: is birthed from) the river after his near death and also is pulled up from that pool of excrement. One could make an argument for birth imagery, but they don't qualify for what I'm going for in adding this point. I'm thinking something more like The Beastmaster's birth from a cow. But, this is a bonus point anyway, so it doesn't matter that Rambo doesn't get it... without a stretch.

5. alter ego and 6. special/normal This one applies more to Rambo in First Blood than this film, but I am inclined to take the whole Rambo story into account--and you'll see why later. Rambo starts both First Blood and Rambo: First Blood Part II as a quieter, calmer character and then he is forced to erupt into something else. He is never normal in the story we see, though he does keep his special nature hidden until he needs it. But, taking the whole story into account, John Rambo was once a normal guy. He is not the Punisher, who was shown in the Born comic book miniseries to have been a bit of a crazy, homicidal guy long before his family was slaughtered (his usual origin story).

7. twelve associates Kozlovic does not require that there be twelve, but Rambo should have a usual collection of characters that surround him to get this point. Other than Trautman, no one follows Rambo through more than one story. And, some of the supporting characters in this film, specifically, will fit roles below better than here. So (-1) unless we count Turbo and Kat and White Dragon from Rambo: The Force of Freedom.

Now, some more specific roles (and, I should reorder the Kozlovic-Black scale to position these right after the twelve associates). Murdock serves as an obvious 9. judas-figure in this film. I'm not sure Jesus would threaten Judas with physical violence as Rambo does Murdock, though. Outside of this specific film, America serves as the Judas-Figure for Rambo. Warner (1992) tells us,

Rambo's violence is motivated by America's betrayal of the mmory of the men of Baker Troop, now gone, or the demand for love founded in patriotism that closes Rambo: "We just want [sic] our country to love us, as much as we love it." (p. 680)

Co Bao also serves as a clear 10. mary magdalene-figure, with the implicit romance captured in some very brief interactions. There is no 10.5. virgin mary-figure, but that is a category I am adding, not a necessary point. (I am adding 4 points but still want to total out of 25, potentially proving Larsen's (2013) point.) Colonel Trautman is the 11. john the baptist-figure, pointing the way to Rambo and announcing to all how great he is.

12. death and resurrection Rambo is, of course, presumed dead by the Podovsky at the end of the film, before he abruptly sits up and fires that bazooka at Podovsky's helicopter. And, this results in a cheer from the audience--13. triumphalism. Bell-Metereau (2010) suggests that Rambo should be viewed "as a sacrificial rather than a triumphant hero" (p. 41) but I see no problem with him being both. That is kind of the point of a Christ-Figure.

14. service to lessers and 15. willing sacrifice Rambo serves Murdock, who is little more than a bureaucrat and who lies about his own Vietnam service to Rambo then admits to Trautman that Vietnam was not his war. But, more importantly, Rambo serves forgotten POWs and the American people, his betrayers. Us. Within the story, Rambo serves people who cannot help themselves. (Gibson (1991) suggests that the Missing in Action and Rambo films "resuscitate" the "old American figure of the avenging warrior who saves a society that cannot save itself" (p. 389). Outside the story, though, I would argue, Rambo serves us, the American audience. His triumphs and his suffering serve to free us from our guilt. If there were POWs still in Vietnam, surely we would send a real-life Rambo in to get them, so since we have not, there must not be any POWs. We don't have to feel guilty about the possibility of said men being there, forgotten.

15.25. torture Something I think needs to be added. A Christ-Figure may not have the apparent (or literal) death and resurrection but may undergo severe torture, which also suggests a link to Christ. Rambo is definitely tortured, and even positioned appropriately: 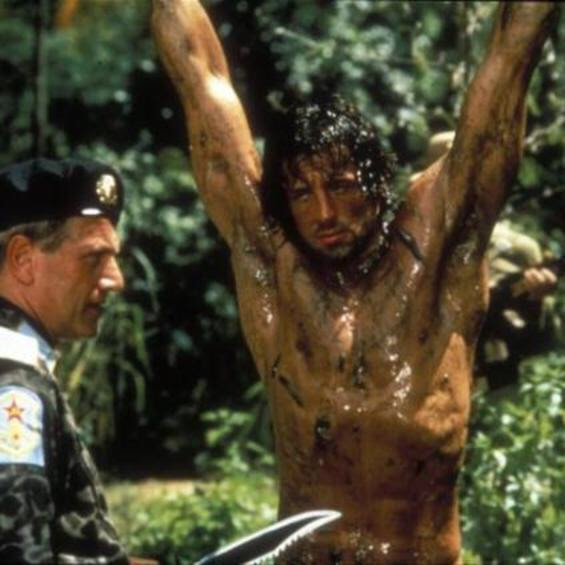 Why this morbid focus on suffering? Why does Stallone do this to himself and to those in the audience who identify with him? The American male, he seems to say, must pay for the softness, the self-indulgence and the lack of resolve which allowed the black male [this piece, mind you, also deals with Rocky's black opponents] to triumph at home and the Vietnamese and the Russian to triumph abroad. (p. 94)

Rambo suffers for American masculinity/hegemony, but he also suffers so that we do not have to (see above, regarding "service to lessers."). Back to (-1)

15.5. stigmata Another one of my additions. John Matrix only real injury in Commando just happens to be in his side. Rambo's biggest injury (in Rambo III, mind you) is to his side. Jeffords (2005), detailing Rambo's torture, writes, "But the best scene is reserved for Rambo III, where a piece of flying shrapnel from an explosion during the prison escape is lodged in Rambo's right side" (p. 151). Walker (1991), while not specifically referring to that injury, describes "the lance that delivers the wound" myth. It is only "when that lance can touch the wound again that the wound can be healed" (p. 8). Walker is referring to the Vietnam War as the lance, and returning to fight the war again--in movies like Uncommon Valor, Missing in Action and Rambo: First Blood Part II--as allowing that wound to heal. But, the reference is notable because Rambo literally suffers such a stigmatic wound in the third film. So, bring us up to an even score.

15.75. atonement Added because of Larsen (2013). McWilliams continues: "Only after full purification and proper atonement can Americans hope to regain their masculinity and recover their natural superiority" (ibid). Read: hegemony. Mortimer (1999), citing Studler and Desser (which I cannot get my hands on), argues that the "POW-Avenger" movies were "part of a conservative shift in American ideology, a manifestation of... a 'will to myth'--a communal need, a cultural drive--for reconstruction of the national past in light of the present..." (p. 146). That is to say, these movies serve to create an extra-textual story that Vietnam was not a failure on our part. We were the underdogs, and victory was possible, if we has just stuck it out a bit longer, like to 1985. Rambo is not just atoning for other vets within the story or for vets outside the story but for all Americans. The character is bigger than his story. A novel, four films (so far), and a cartoon series cannot contain him. (+1)

16. innocence This one is debatable, but Rambo's crimes in First Blood (the film) are presented as justified, if a little extreme. And, here in the second film, he is specifically let off the hook for those crimes, released from prison to go back to Vietnam. His innocence is vital to him being able to kill in our name. Not very Christ-like, but definitely befitting a Christ-Figure. 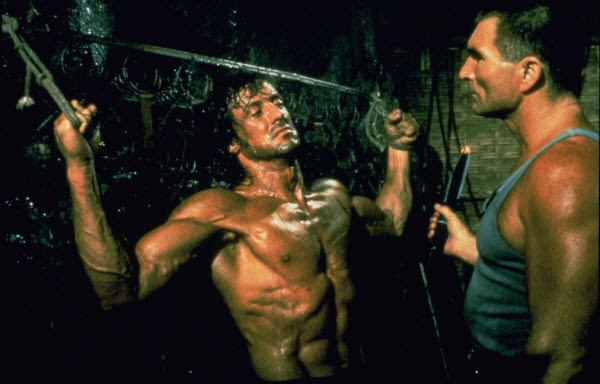 18. cross associations Nothing too obvious, at first. Maybe the bow and arrow. But, then I realized, Rambo was literally hung up on the plane in this film's first act. What shape is a plane?

19. miracles and signs Morag (2009) calls Rambo after Co Bao's death "omnipotent" and a "mud-covered monster." Walker (1991) lists off Rambo's miraculous accomplishments: "...over the course of the films, the character can jump off cliffs, repair his wounds with a fishook and fishing line [no mention of the gun powder?], fight off whole armies with a bow and arrow, and so on" (p. 74). Rambo performs superhuman feats, and has barely any scars to show for it.

20. simplicity Rambo has very little to say, and can easily be characterized by his grunts and his yells more than his few speeches.

24. holy exclamations Writing this entry, I actually didn't notice any in the second film. That doesn't mean there aren't any. Plus, in the first film, there is this exchange: "Will, it's Rambo! He's still alive!" "Jesus Christ!"

25. j.c. initials I desperately want Rambo to get this one. If only his middle name were, say, Charles instead of James. Really, I think the J alone qualifies. So many cinematic heroes with J names. John Matrix. John Rambo. John McClane... Stallone has played Jack Carter, Joe Tanto, Jake Malloy, Judge Joseph Dredd, John Spartan. Willis has played Joe Colton, Old Joe, Jimmy, Jack Mosley, Jeff Talley, Jimmy Tudeski, Joe Blake, John Smith, James Cole (a definite Christ-Figure in Twelve Monkeys), Joe Hallenbeck, and James Urbanski (which is such a generic movie name). Schwarzenegger has played John Wharton, Jericho Cane (a definite Christ-Figure in End of Days), John Kruger, Jack Slater, John Kimble... and he's both tried to kill and saved John Connor. Either every screenwriter is just not that creative, or they want many a hero to evoke Biblical names, especially the good New Testament name John. I am inclined to give Rambo this one, which means a perfect score. (25/25)

Gibson, J.W. (1991). The return of Rambo: War and culture in the post-Vietnam era. In A. Wolfe (Ed.), America at Century's End (pages unknown... I've only got a photocopy of a single page, unfortunately).

Kozlovic, A.K. (2004). The structural characteristics of the cinematic Christ-Figure. Journal of Religion and Popular Culture 8. Retrieved from http://dspace2.flinders.edu.au/xmlui/bitstream/handle/2328/14295/2004054629.pdf?sequence=1