it was just supposed to be another assignment

Stallone was so shocked by the negative critical and listless box office reception for his latest movie, Over the Top, that he is rewriting the next Rambo to be more philosophical, in the vein of Oscar winner Platoon. Such talk elicits quick denials from Andrew Vajna and Mario Kassar, the industry veterans who own 87% of Carolco. They insist that Stallone cannot turn the movie into a talky-thinky film punctuated with a little machine gun fire. "Rambo is an action/adventure film, so if you take out the action," says Vajna, "you don't have a film." (p. 88)

Reading this now, I find it actually more interesting than when I referenced this passage in one of my Rambo speeches back in 2009. See, now I've seen some of James Cameron's comments on the script for the second film. I haven't seen the draft [edit: just as I was about to post this entry, I found Cameron's draft online, so I will read it ASAP], but Cameron claims his was oriented less on action and more on character. His approach, he tells the Hollywood Reporter in 1986, "was a lot heavier, a lot more character. ... I thought it was much more interesting to kind of explore this traumatized character" (Quoted at James Cameron Online). More interesting than what he calls a "superhero-type quality" the final film has.

Stallone shifted the film more toward action. Which is fine, because, yes, this is an action film. Over the Top, on the other hand, presents itself as an action film, but contains--from what I can remember--no real action. Arm wrestling is not action, not cinematic action, anyway. Still, that film got a line of toys just as Rambo did. 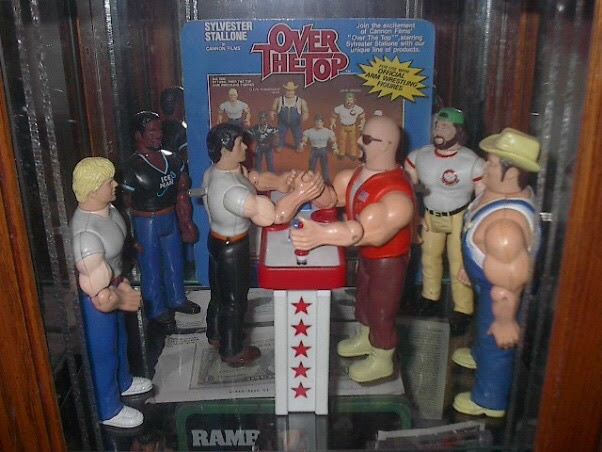 Yes, those are action figures who arm wrestle. No Over the Top cartoon, though. The Rambo cartoon is an... amazing thing to see, by the way. For, you know, reasons, Rambo goes on missions shirtless because that is the Rambo the kids know. Still, black pants and no shirt is better than Chuck Norris fared in his cartoon miniseries, Chuck Norris Karate Kommandos. And, the show's writers could never reference Rambo's Vietnam past or POWs, and they could certainly never even hint at the violence against police officers in Hope, Washington (Madison, Kentucky in the novel, but why bother referencing the novel at all while dealing with the cartoon? At the end of the novel--SPOILERS for a 40+ -year-old book--Rambo dies.). Rambo had to be toned down so much that fans of the movies (or novel) wouldn't like it. But, it still had the stink of being directly associated with the movie character so plenty on the opposite end of the spectrum wouldn't like it either.

A cartoon is not what John Rambo is supposed to be.

Whether pro-war or anti-war, Rambo is violent, too violent for a children's cartoon. He's supposed to be innately dangerous, disturbed. Rambo in Morrell's (1972) novel is unstable, a man who would "show a fight to anyone who pushed him" (p. 276). At davidmorell.net--an old FAQ that doesn't seem to be there but I've got a printout from 2009--Morrell called the character from his novel "angry, burned-out, and filled with self-disgust because Rambo hates what he is and yet knows it's the only thing he does well." (He's actually referring to Stallone's portrayal of the character in the fourth film in comparison with the character in the novel.)

On a current page at Morrell's website, Morrell says,

Sly phoned me before making the [fourth] movie and said that in retrospect he didn't care for the second and third films because they glorified the violence. [Gotta interrupt to point out that after making the fourth Rambo, Stallone has gone on to make the three Expendables films, which certainly glorify violence.] He said he wanted to get back to the tone of my novel. This time the character is the way I imagined--angry and burned out. There's a scene in which Rambo forges a knife and talks to himself, basically admitting that he hates himself because all he knows is how to kill. He spends a lot of time in the rain as if trying to cleanse his soul. At the start, he gathers cobras in the jungle, and he's comfortable with them because he knows he has nothing to fear from another creature of death. The most telling line of dialogue is, "I didn't kill for my country, I killed for myself. And for that, I don't believe God can forgive me."

On that older FAQ, Morrell added: "While that statement is in keeping with my novel FIRST BLOOD, it's jaw-dropping when compared with the dialogue in the second and third Rambo films." And, it is light years from Rambo: The Force of Freedom.