it's not the police. it's him

#3 - outsider... McClane stayed in New York while his wife and kids moved to LA. On a visit for Christmas, he is definitely an outsider. As a cop at the Nakatomi Christmas Party, he is also an outsider. (3/3)

#5 - dual identity... this one works a little strangely. Gruber and his crew know who McClane is pretty early on [edit, as the movie continues, and I realize this isn't quite true], but the link between he and his wife with the maiden name thing--that makes this aspect of who he is--offering some leverage--more important. Plus, Powell knows him as Roy. (5/5)

#6 - appear mundane but is special... before Powell and Gruber et al know who McClane is, they suspect he's a Nakatomi employee. But, more importantly, rather than being a mundane police officer, McClane is a 1980s Hollywood-approved hero, capable of superhuman feats. (6/6)

#7 - twelve intimates... Kozlovic's "scale" doesn't actually require that there be twelve intimates. McClane has Powell (#11 below) and Argyle and, while they are not as supportive (or successfully supportive, anyway), the reporter, the chief, and the FBI guys could fit the bill, too. And more below (9 and 10). (7/7)

#10 - Mary Magdalene-Figure... It occurred to me recently that Kozlovic includes a Mary Magdalene-Figure but not a Virgin Mary-Figure. I think Holly Gennero, in a way, fits both. She is not John's mother, of course, but her role as mother to his children (and eventual victim of Gruber) makes her quite the innocent. On the other hand, she has also, at least on some level, rejected her marriage and is playing the part of a single woman for Nakatomi. While she does specifically tell John she misses him, they cannot really demonstrate feelings for one another because of circumstance. Her dual role as mother and unattainable wife definitely, in Kozlovic's terms, sexually tags her. (9/10)

#11 - John the Baptist-Figure... Powell serves as go-between for McClane and the authorities, however much they might listen, and definitely points the way to McClane. (10/11)

Another aspect that is, perhaps, missing from Kozlovic's Christ-Figure is that the Figure undergoes something much bigger than just death. He is tortured. Not always, but it seems like a reasonable secondary criterion.

#13 - death results in triumph... McClane's arrival after the big explosion leads directly to him beating Gruber. (12/13)

#14 - sacrifices benefit others of lesser worthiness... Harry is a great example of this. The police chief as well. They don't trust him but he is, as they say, getting shit done. (13/14)

#15 - choose sacrifice due to circumstance... I worded Kozlovic's standard her a little differently because I think McClane fits this one pretty well. He's a cop so he considers it his duty to help, but really, it's a locked down and he's the only one who knows what's going on. That's the "newfound knowledge" Kozlovic describes. (14/15)

#16 - accused of crimes but innocent... Definitely true here. The police chief accuses McClane of being one of the terrorists. (15/16)

Kozlovic doesn't deal in stigmatic injuries either. and, McClane's damaged feet and bloodied hands would make him a shoe in for the point.

#19 - miracles... Rips open his feet and keeps on standing. Jumps off an exploding building and survives. Tapes a gun to his sweaty back and it stays. (16/19)

#20 - appears as bumbling simpleton... John McClane is almost immediately good at everything he's doing here. So, no. (16/20)

#21 - pronounced poverty... the movie covers a handful of hours, but McClane has lost a shirt and is barefoot. And, as the movie goes on, he becomes quite bloody and filthy. I'm going to give him this one. (17/21) 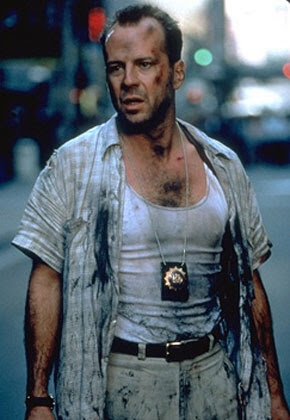 It even returns after this first Die Hard.

#24 - verbal tags... there is one really obvious one, so I haven't been looking for more. When McClane shows up after the explosion, bloody and barefoot, HOLLY says, quite plainly, "Jesus." Another one, earlier, but I hadn't noticed it before--when the police chief first learns about "Roy" from Powell, and Powell uses McClane's ability to spot a phony ID as evidence he's a cop, the chief responds, "Jesus Christ, Powell..." (19/24)

I actually did a quick Kozlovic score for John McClane before but I didn't provide any details. Previously, John got 17/25.

Or, maybe Jesus Christ was a John McClane-Figure.