John McClane was born in 1966 and his name was Joe Leland. He was born in the pages of a novel called The Detective by Roderick Thorp. In 1968 he would be played by Frank Sinatra in a film adpatation. In 1979, Thorp would publish a sequel called Nothing Lasts Forever in which Joe Leland was trapped in a building taken over by terrorists. Supposedly, Sinatra had a clause in his contract for The Detective that made him the mandatory first offer to play the character in a sequel. I'm not sure when that happened, but at some point, Sinatra turned down the role. The script was reworked as a sequel to Commando but Arnold didn't like it...

I should mention, since I probably will not have cause to cite specific passages that I am going by information from Ryan Lambie's Den of Geek piece, "The strange history of the Die Hard movies," 24 November 2011; Andrew Barloq's I Choose To Stand blog entry, "Retrospective: Die Hard with a Vengeance (1995)," 10 December 2013--

(Interesting sidenote: in his retrospective on the original Die Hard, Barloq says,

The film is nothing like the typical 80's Commando/Rambo-model where a single man marches into a military base and somehow manages to kill an entire private army with his machine gun. Instead, we get a single, desperate, ordinary man, a confined location, a finite number of villains and extremely high stakes which just keep mounting until the explosive climax. McClane spends half the movie in hiding, runs away in nearly every fight he gets in, gets badly wounded and improvises his way through situations.

I rather disagree... initially, as I read that bit. Die Hard really only pretends to be something different. Watch the final assault on the island in Commando or Rambo's assault on the prison camp in Rambo: First Blood Part II--they are both sneaking around most of the time, with the occasional burst of gunfire and/or explosives. John Matrix is, by the time we meet him, not at all an ordinary guy, but he is living as one. We see him in the opening of the film playing in the pool with his daughter, a family man (sort of). John Rambo, as well, was once an ordinary guy. We just meet him after he has been trained to not be so ordinary anymore. And, John McClane isn't so ordinary, either. He has fantastic luck and manages some superhuman feats in this first film, then does it again in Die Hard 2 and that third act of Die Hard with a Vengeance takes it even further. John McClane only runs away from the fights he loses. John Rambo, in Rambo III takes refuge (not entirely deliberately) at one point, hiding while he deals with some serious wounds.)

--and the IMDb trivia page for Die Hard.

Anyway, back to the convoluted road to John McClane movies.

Speaking of Commando, by the way, Nick Nolte was meant to be the lead before it ended up going to Arnold Schwarzenegger. And, Arnold was one of many actors who turned down the script that would be Die Hard. Among others: Sylvester Stallone, Burt Reynolds, Richard Gere, Harrison Ford, Mel Gibson, Charles Bronson, Michael Madsen, Don Johnson, Richard Dean Anderson, Al Pacino and Tom Berenger.

(And, since we're dropping names, an interesting sidenote: Lloyd Bochner, the father of Hart Bochner, who plays the sleazy Harry Ellis in Die Hard, was in the Sinatra-starring The Detective.)

Plus, at one point, Clint Eastwood owned the movie rights to Nothing Lasts Forever. 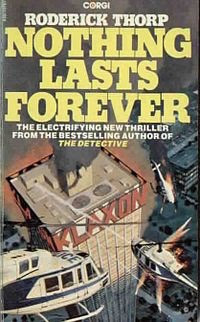 When it came time to make the sequel to Die Hard, an entirely separate novel--58 Minutes by Walter Wager was used. Though not as well received, Die Hard 2 performed well enough at the box office that a third film became a thing. At one point, a script called Troubleshooter (the author of which I can't seem to figure out online--maybe Randall McCormick who shares a story credit with director Jan de Bont (who was Director of Photography for Die Hard and screenplay by credit with Jeff Nathanson for Speed 2: Cruise Control... But, I get slightly ahead of myself. See, it turned out that Troubleshooter, which (adapted as a Die Hard film) would take the "Die Hard on a fill-in-the-blank" format of so many action movies released in the wake of the original Die Hard onto a ship in the Caribbean. But, that plot was a little too close to the Steven Seagal-starring Under Siege so it just wasn't good enough as a second sequel to Die Hard. But, it would turn out to be good enough (or bad enough, depending on who you ask) to be the first (and only) sequel to Jan de Bont's Speed.

Meanwhile, a script by Jonathan Hensleigh called simon Says--originally envisioned as a vehicle for Brandon Lee--had been adapted as a third sequel to Lethal Weapon (i.e. Lethal Weapon 4). For whatever reason, it wasn't working there, so it was translated into a Die Hard movie--Die Hard with a Vengeance. That's why the setup is so different, with no isolated location and no John McClane working alone. What was supposed to be Martin Riggs became John McClane and what was supposed to be Roger Murtaugh became Zeus Carver. Eventually, Lethal Weapon 4 would happen, but not with that script.

Move forward a little more. An article in Wired in 1997, "A Farewell to Arms" by John Carlin was turned into a script called WW3.com. That, also, was changed into a Die Hard script, this one initially entitled Die Hard: Tears of the Sun. While the title would be changed to Live Free or Die Hard, Bruce Willis would go on to also star in a movie called Tears of the Sun.

In fact, A Good Day to Die Hard was the only script written specifically to be a John McClane movie. And, by then, John McClane has definitely much more like the "typical 80s" model from the parenthetical above. Meanwhile, a few years earlier (a year before Live Free or Die Hard, actually) Bruce Willis starred in 16 Blocks which, I think, is more in line, tonally, with the original Die Hard than the last couple sequels were. And, personally, I like that Die Hard with a Vengeance is so different from its Die Hard predecessors. I think I would rather a specific character be taken in different directions than just be repeatedly subjects to the same situation in a new location.