that's a hell of a combination

(There's a whole lot to be said about Rambo and masculinity and hegemony and everything I talked about yesterday, but I want to cover something else before I get back to that... for two reasons: 1) to not be too repetitive and 2) to give myself a little time to look over a whole lot of new research in between some bits of homework I've got to do tomorrow. For tonight, this may come mostly from me, but beware: in addition to several things found in new research earlier tonight, I've got a stack of sources from 2009 when I did two speeches on Rambo, so the entries for the rest of this week may be dense. Then, a fifth movie this month, but only for 6 days, so that I can watch Groundhog Day on Groundhog Day. Now, on with Rambo.)

Right from the start, this movie tells us a couple things. The opening shot: an explosion, not fiery but still an explosion. We're in for something big. Then we get to see our location a little better: a prison. Most of the prisoners: black. This is not a movie about race, but it depends quite a bit on notions that twisted up in racial identity as well as cultural identity. But, there is something worth noting--John Rambo is not entirely white. The Russians in this film are far whiter than he is. Podovsky and Yushin both have blue eyes. His father was Navajo. 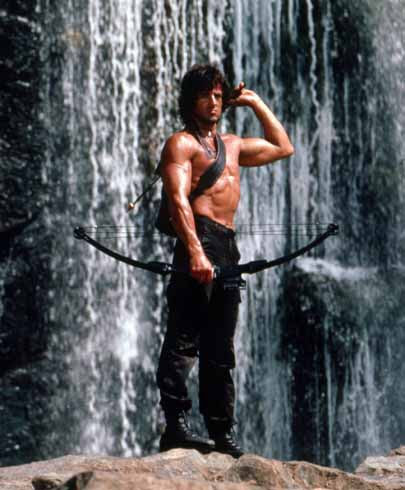 His mother was German. (Sylvester Stallone's father is Italian, by the way, his mother part Ukrainian Jewish, part French.) Another one of Stallone's big characters--Rocky Balboa--is Italian. Rocky, by the way, had a film out in 1985 as well--Rocky IV, and he too was battling the Communists. Both Rambo and Rocky forego modern technology for something more... natural. While Ivan Drago (Dolph Lundgren) trains in high-tech facilities, Rocky trains in the snow and in the rafters. While even Colonel Trautman (Richard Crenna) suggests Rambo rely on (modern) equipment for his venture into the jungle, Rambo is forced by plot convenience, having to cut himself loose from a) his equipment and b) the plane to survive. But, it isn't just plot convenience. It is mythological convenience. Like the dual training montages in Rocky IV, there is a strange delight in pretending that we--and, Rocky represents us just as much as Rambo does--don't need all the modern technology to be great, even if we were quite convinced at the same time that we were winning the arms race and the Cold War. That is to say, sure, we had all the best equipment, we had the best weapons, but ultimately, our greatest asset was just being American, coming from good American stock. Having Rambo be a little foreign himself--this actually makes him more American for the same reason; what we imagine ourselves to be is the melting pot, or something more like a crucible, with the best rising to the top and the downtrodden being left on the bottom, forgotten.

Except, there is another contradiction. Rambo, at the start of First Blood is a drifter, presumably homeless. At the start of Rambo: First Blood Part II, he's in prison. He is there with all of those black men, and it is a fitting place because he is both the best of us and the worst of us. In terms of American myth, he can be both at the same time because that is part and parcel of the American Dream. A man can work his way up from nothing--Rambo was born in Bowie, Arizona, a town whose population today is still under 500--to be something great. Rambo has become (presumably, though this might be limited to jungle missions) one of the top three American soldiers; his name was on a list that I assume also includes John Matrix

(Or, whatever his name was before retiring. The rest of his unit, he says, received new identities. If that sort of protection was necessary, I would guess it was even more necessary for him, which would explain why he has such a made-up-sounding name; it was made up. Except, Bennett and Arius, who knew him before, are a little too comfortable calling him "Matrix" so this theory may be flawed.)

and Martin Riggs, but not "Big" or "Little" Johnson (from Die Hard, for those not paying attention). Nevermind that the mission Rambo is actually sent to do is something that just about anyone could do. What matters is that he's the best for whatever it is, and he's obviously the best for the mission he actually undergoes. Even then, though, he is isolated into the role of underdog, "expendable" no matter what Co says. And, that's how we like it. We assume we're the best, but want to be underdogs because but we love a fight. A bowl of contradictions, we Americans are.

McWilliams (1992) argues that Rocky Balboa's black opponents in Rocky, Rocky II and Rocky III are "stand-ins for Muhammad Ali, the champion who had defeated all white challengers and who mocked many white American pieties." The specificity may not be true, but doesn't it seem possible that many in the audience found themselves cheering for Rocky not just because he was the protagonist but because he was white? "Through Rocky," McWilliams continues, "the white male could vicariously regain the sports supremacy - and the virility - which he lost to black nationalists in the sixties. Similarly, Rambo allowed him to win on the movie screens the war he had lost in Asia" (p. 92). As I've been arguing all month, a great deal of the action movies in the 1980s were about the American (white) male winning, and John Rambo, James Braddock, John Matrix, Martin Riggs and the soldiers in Uncommon Valor quite specifically are refighting the Vietnam War. The childrens cartoon Rambo: The Force of Freedom identifies Rambo as "the honor-bound protector of the innocent" and "liberty's champion." Nowhere in First Blood or Rambo: First Blood Part II have we really seen honor. James Cameron, who wrote an earlier draft of the script for this film told Us magazine in 1991 that while his script "was pretty violent [it was] not in such an amoral way." Rambo kills indiscriminately after Co is killed. He is no longer fighting the Communist Vietnamese soldiers or the Russians; he is fighting Vietnam. Co, by the way, is an acceptable love interest, even if there is no time for consummation, because she longs to travel to America with Rambo; she is effectively no longer Vietnamese, or as Morag (2009) puts it, she is "rehabilitated" (p. 192) only to die in Rambo's arms before she can make it to America. And, isn't that the true tragedy here? Isn't that what Rambo is avenging? (I mean, aside from all those POWs.) An innocent, wide-eyed foreign girl who longs to come to America has been killed. Nevermind her own fighting ability, or her disguising herself as a whore. A Native American born and raised in Arizona, Rambo must absolutely avenge her death because what else would he be fighting for? (Aside from all those POWS.)

It's actually a little manipulative putting Co in there--and that was Stallone's idea, by the way. Rambo already has a fight worth fighting. But, that conversation on the boat with Co humanizes him just a little, and their scene by the river just before she dies, which is just a little too bright and soft like it's part of some other, more romantic film, connects these characters, personalizes Rambo's fight to come. Why give any of the POWS personality when you can just "put a girl in it" (as Stallone told Cameron)? That first POW Rambo rescues, Banks (Andy Wood)--he's got a nice (not nice as in pleasant but well acted and potentially deepening his character) moment when he asks, "What year is it, anyway?" Told it's 1985, there is the briefest of moments where you can see that fact sink in. It's really Bank's only moment to emote (that and a little cowering in the torture room) and the camera cuts away before we can really see the years he's been imprisoned. This is a movie ostensibly about rescuing Banks and the other POWS and yet the movie never spends any time with them, never gets to know them. For the film, just as with Murdock, they are effectively as expendable as Rambo says he is. They cannot even really participate in their own rescue because that would ruin the setup of the rugged individual American soldier fighting off the foreigners and saving the day.

McWilliams, D. (1992). The search for an icon: Values in American popular films in the 1980s. In W. Grunzweig, R. Maierhofer & A. Wimmer (Eds.), Constructing the Eighties: Versions of an American Decade 85-96. Tubingen, Germany: Gunter Narr Verlag.