Not that I still need to be fighting with Schlussel, or Ebert after a week with this film. 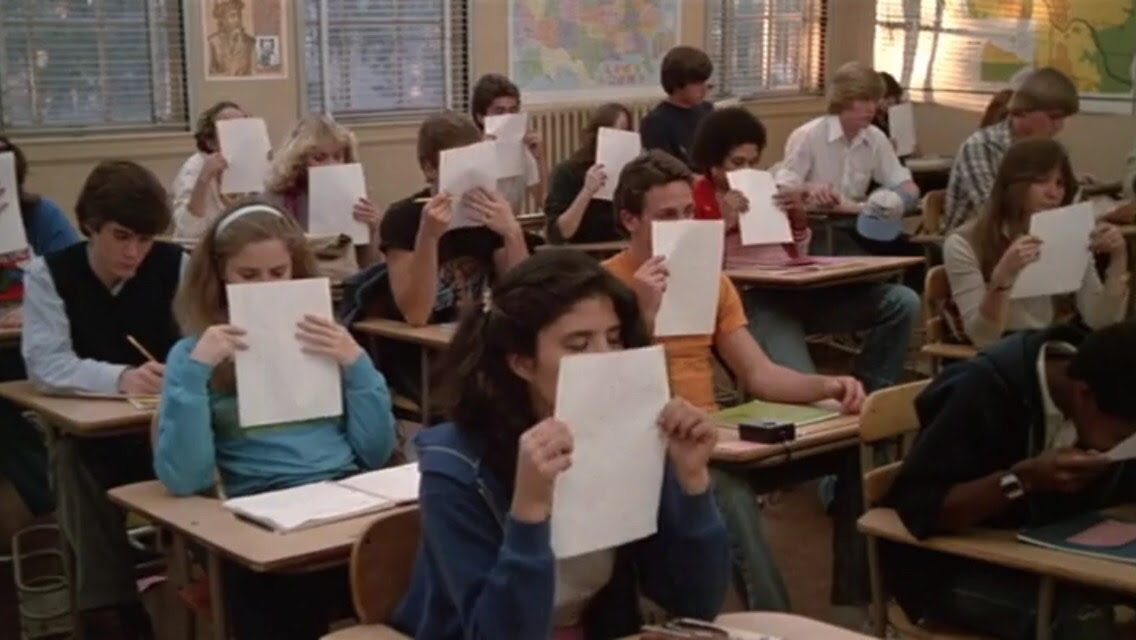 What really matters on this Day 7 is stuff like the freshman students sniffing the handout. According to IMDb, sniffing handouts was a common thing back then because those handouts were made on a spirit duplicator--photocopiers were too expensive. Eric Zorn at the Chicago Tribune tells us about these "dittos" which were "nearly always in purple ink, sometimes moist and fragrant from the machine just down the hall." Zorn quotes Fred Keen, 71 (in 2007, when Zorn's article appeared), who was "one of America's last remaining salesman of ditto fluid": "That smell was frying your brains... It was pure methyl alcohol."

One reason dittos began to decline was a concern that the vapors were unhealthy... studies showed that personnel who hung out at the spirit duplicator suffered particularly high incidences of headaches, dizziness, nausea, blurred vision and other ominous symptoms.

In other words, the "high" that we got from inhaling deeply from pop quizzes the teacher handed out was actually more like a temporary illness.

User thetowncrier at Quipster, tells us that his teacher "says that the kids would spend the five minutes after receiving a new sheet just smelling it."

This is the kind of trivial information I really enjoy sometimes. Like sleeping on a clothesline, a British saying about how tired you are that, however common it may be, I learned about from Alan Moore's From Hell. Details that do nothing for the story but suggest a verisimilitude of setting that immerses us further into the world of the fiction.

Anoher things to which I have not gotten: Spicoli's use of "fag" as an insult. It's such a commonplace thing for the time, I'm not sure I could provide much insight... Give me a phrase like his, "Those guys are fags" in a more recent film, and I may spend an entire blog entry (or more) dealing with the reification of heteronormativity. And, sure, this film definitely deals in heteronormative terms. Aside from teenage sex and drug use, this film doesn't deviate much at all from "normal."

In the book, there is a bit more depth to Charles Jefferson (the football player played by Forest Whitaker), adding perhaps to a discussion of race--

--or the lack thereof in the film. Robinson at A.V.Club details how Charles, in the film, has "little more characterization than 'scary big black dude.'" Meanwhile, Crowe's book

gets into his family life, his desire to not "be anyone's 'black friend,'" the racist taunts that drove him away from high school football, his coach's successful bid to get a huge cash influx for the school's losing football team by recruiting Charles Jefferson, and Jefferson's general attitude of "fuck this, I'm headed for the majors" defiance throughout his senior year.

Charles also hijacks a city bus when he's in a bad mood, in what seems to be the book's most outlandish stories.

One last thing, I am sorry I did not spend more time pointing out that Brad is a pretty good brother. He may want to break up with his girlfriend because she won't have sex with him, and he may fantasize about his sister's friend--but, hey, who hasn't? But, when it comes to his little sister, he's a stand up guy.

After tonight I am done with Fast Times at Ridgemont High. Tomorrow, we will be heading to Ocean Park High.

Or more accurately, we won't be.