So anyway, last night I was so tired that I'm surprised I made it through the entirety of Speed Racer; aside from a couple musicals, it's the longest movie I've watched for this blog. Though I did not fall asleep--unlike, say, when I watched A Nightmare on Elm Street--it played like a weird dream... which is appropriate since the Wachowski's constructed the film visually like a technicolor dream of sorts, a live action cartoon.

It's not just the color, either. Though the palette of the film is far broader and brighter than many a movie of late--seriously, just today, I saw a video in which someone brightened up Man of Steel because, well, Superman should not be dark, but that's the way of movies lately, most everything's a little dark and dreary, and far too many movies have that teal and orange thing going on. This movie plays like something not only outside our normal reality but very much outside the movie reality.

For example, Royalton and Speed just now--they're clearly being filmed in front of a green screen but they're also being filmed separately. The hands don't quite match up with the arms... Have a look: 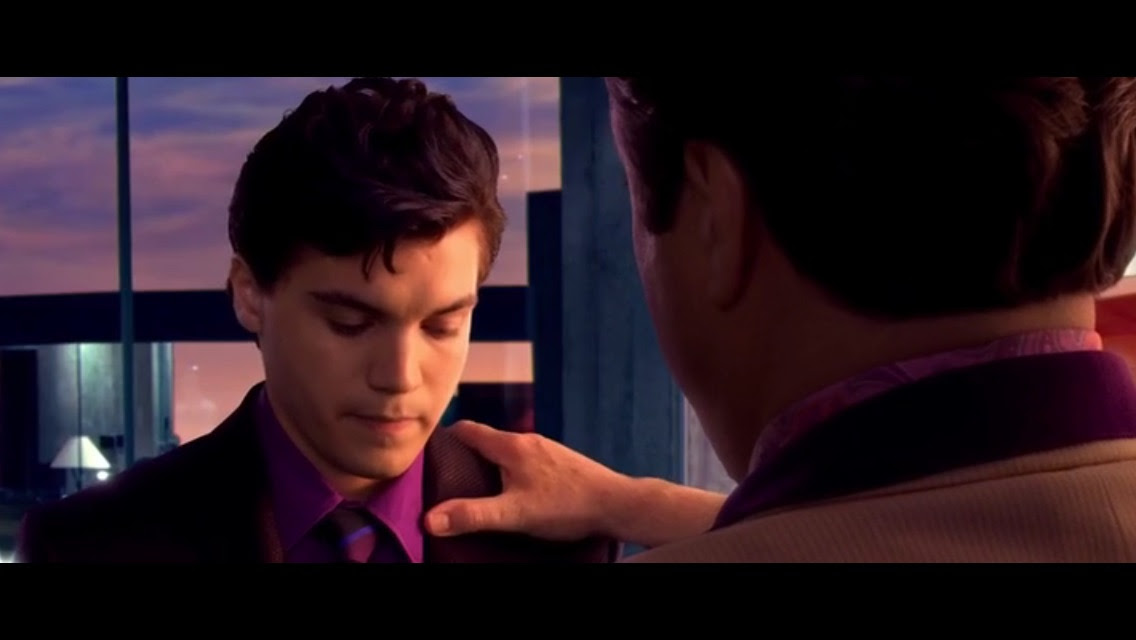 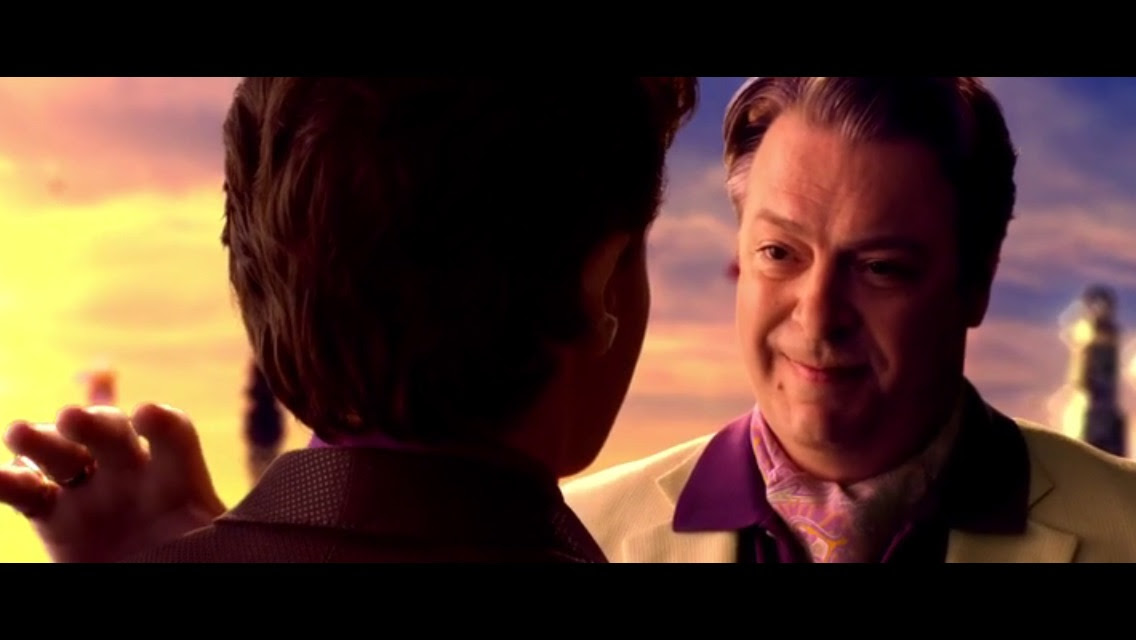 I've seen these blatantly fake sets before--Sin City and its sequel, Sky Captain and the World of Tomorrow, the Star Wars prequels... But this plays with the surroundings differently; it's not just the alien landscapes of Star Wars or the steampunk world of Sky Captain or even the unreal hellish cityscape of Sin City, it's race tracks and futuristic cityscapes plus an anime-style exaggeration of visuals, blurring of backgrounds, and camerawork that just wouldn't be possible in a real environment. 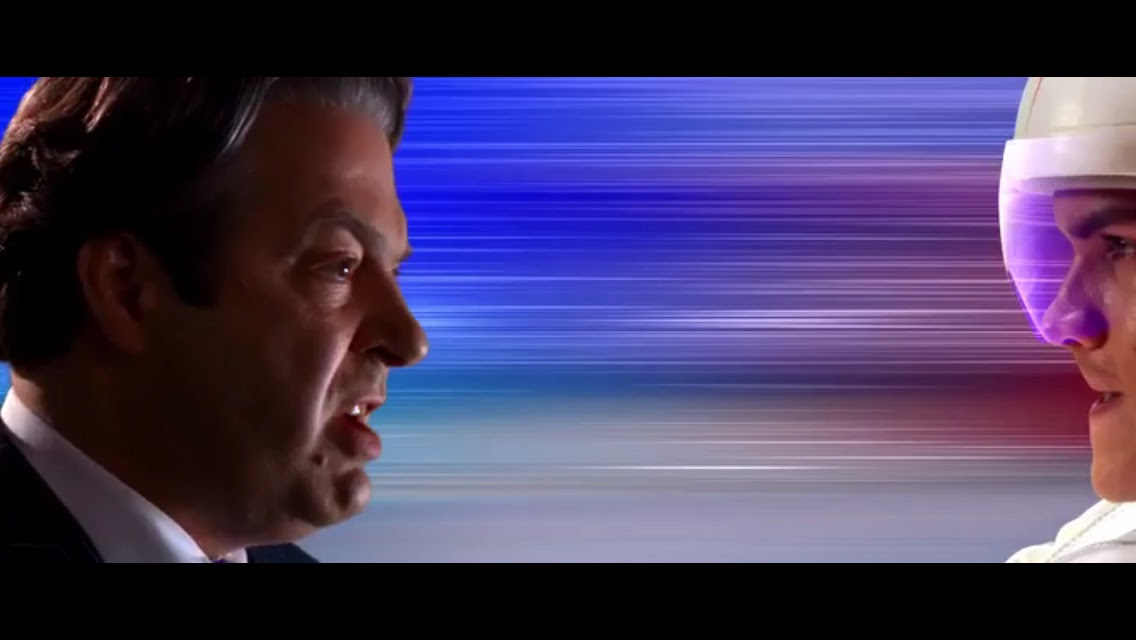 That shot right there is from a conversation scene. Speed turns down Royalton's offer and things get heated. The camera moves around Royalton and the background blurs into the same lines we see during the racing scenes. Conversation and racing the same... it's a common visual for manga or anime, but not American film. Even though the background is not usually in focus--though that's even changing with stuff like High Frame Rate 3D--we want it to be something that's actually there. This film almost barely goes more than a minute or two without overlaying one image over another, often with the top image in motion. Everything in this movie evokes movement. However long the film is, there's just no time for stillness or quiet.

Dexter Palmer at tor.com points out:

By the standards of conventional filmmaking, [Speed Racer's] terrible--it has only the merest suggestion of plot and character, leaving nothing worth noting but a 135-minute exercise in style. But is that necessarily a bad thing?

Well, no. It's not. The energy, the color, the simplistic big business versus the independent plot--this makes for something quite watchable and fairly enjoyable (if a bit long and repetitive), regardless of whether it qualifies as, say, art.

And, I don't mean the usual argument you might hear--that we need "popcorn fare" as much as "arthouse" pics. Just like I've said time and time again that every movie will tell us something about gender roles at the time the film is made, or about social roles in general, about the state of society here and now, so does a movie like Speed Racer. Look at when this movie came out. September 2008 release date, principal photography a year earlier (June to August 2007). Meanwhile, in the US, you've got a financial crisis in the works, leading into the so-called "great recession" around the world. In fact, the European sovereign-debt crisis happened right as filming of Speed Racer in Germany was winding down. Coincidence?

Probably, but still, it's no coincidence that this huge visual extravaganza finally got made (film rights had been lingering around for a decade and a half) just as the divide between the rich and the poor around the world was becoming clearer than it had been for a while. This is spectacle, something to distract the audience from reality. It's got simplistic themes because that's what should attract the biggest audience. That Speed Racer didn't actually do that well at the box office should not get in the way of looking at what the movie represents. (Keep in mind, as well, that Iron Man, the beginning of the new Marvel cinematic universe, was in theaters at the same time.) A spectacular action film, with visuals that would have been impossible a handful of years earlier. This was filmmaking for the new millennium, and something deliberately extravagant, exploding with color and excitement for an audience that could really use it... Aside from the economic precipice looming, there was also America's "War on Terror" that had been going on for too long. Speed Racer offers up clear villains, moneyed villains, and makes it easy to know who's the good guy and who's the bad guy. Reality was not so neat.