right now, lies is all we got

Take a bit of Waking Ned Devine, some Doc Hollywood, a dash of Funny Farm, some themes left over from the likes of Brassed Off and The Full Monty and Billy Elliott (with those last two, I do not mean the dancing or the stripping) and you've got The Grand Seduction, an English-language remake of the French-Canadian Seducing Doctor Lewis. It's the simple story of a small town... village... "harbour" lying to an out-of-town doctor to convince him to settle there so an oil company factory will also settle there and the locals will all have jobs again. The film begins and ends with nice down-home narration about the importance of hard work--and the sex to be had at night when your tired, which, with at least one local woman, has amounted to a few too many kids.

(Anyone who has seen the film might note a mistake there. Since the past seven years in town have been mostly everyone collecting welfare checks because their fishing industry dried up, that woman has not had all of her children because of the after-work sex but, I guess, some bored-without-a-job sex. Still, these are people who know how to enjoy their lives, and each other, but really just want to work and feel like they're accomplishing something with their lives.)

The movie is a bit schmaltzy but relies on some good deadpan performances from Brendan Gleason and a few other inhabitants of Tickle Head, who can turn simplistic dialogue into punchlines. It certainly thrives on the idea that small town folk are all good people just trying to get by. Hell, even the doctor, a plastic surgeon not unlike Doc Hollywood's Benjamon Stone, is really an all around nice guy who enjoys watching and playing cricket, listening to jazz, and misses his fiancee and his dog back home. We meet Dr. Lewis (Taylor Kitsch) at the airport, where he is detained because he's got cocaine, a situation that quickly spirals from him trying to bribe the security agent with free plastic surgery to that agent getting him stuck in Tickle Head for a month, to test out the place. It's a contrived setup, but the movie quickly moves past it, except for a brief, and quite amusing exchange between Brendan Gleason's Mayor Murray and the doctor, while fishing...

So, they're fishing because the local phone operators are listening to all of the doctor's phone calls home. They've discovered that Dr. Lewis doesn't have a father, so Murray takes him fishing and makes smalltalk, including an inquiry about his lovelife, a comparison between Dr. Lewis and Murray's (invented) dead son, and an offer of cocaine, because if the doctor really needs it, the folk of Tickle Head are "down with it." Otherwise, Dr. Lewis never seems like a guy who uses cocaine... whatever that kind of guy would be like. In cinematic terms, he doesn't feel like a guy who would be caught with cocaine.

Instead, he's a romantic, worried that his dog back home isn't being taken care of well enough, and worried that his fiancee is growing distant. She is--MAJOR SPOILERS--in fact cheating on him, and has been for three years, with his best friend. But, we never see this fiancee or the best friend. They are voices over the phone, extraneous details to a story that is not quite about Dr. Lewis even though it seems like it wants to be. There is, for instance, the local postmistress, who Murray wants to be flirtatious with Dr. Lewis. She refuses because she knows that Dr. Lewis is engaged. The movie hints at a relationship--that I figured would play a lot like the one between Dr. Stone and Lou in Doc Hollywood, her helping him figure out the real draw of the small town and the good people, him becoming a bit less selfish and dickish... except Kitsch's Dr. Lewis never comes across selfish. He's the victim of a ruse and is never the bad guy. Hell--MAJOR MAJOR SPOILER--even when he finally learns of the lies all around him (and this on the very same day he has learned that his fiancee and best friend are having an affair), he recognizes that the people of Tickle Head need him to survive and, with nary a thought, agrees to be their doctor. 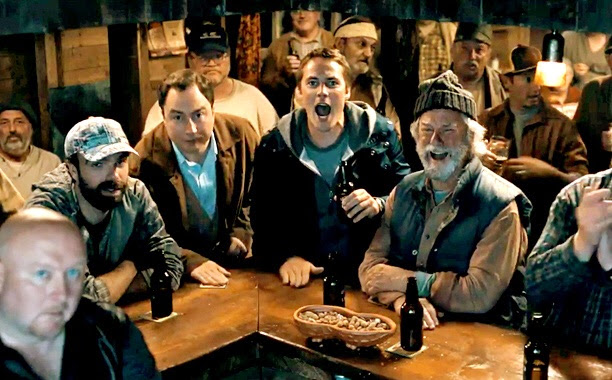 Therein lies the primary fault with this film. Though its themes are tired and its plot seems like pieces of numerous other films before, it still feels so pleasant watching it that it works. Except, there are no real character arcs. Murray is the same guy who loves his town and wants to save it at the end of the film that he was at the beginning. Dr. Lewis is the same doctor he was when he arrived--though he comments on how he became a doctor to help people, we never really get the sense that he ever became anything else (even if "plastic surgeon" is Hollywood shorthand for money-hungry doctor). While there is a spark between Dr. Lewis and the postmistress, and the film hints at romance, this comes to naught until the plot has wound down and the film is ending. What seems like a film about romance brewing between a man and woman but is actually more like a romance between that man and the harbour (village) of Tickle Head turns out to be, well, neither. The film turns out to be so slight that, while pleasant, I'm not sure there's much to think about after.

Not that there isn't room for slight entertainment in cinema.

The Grand Seduction is enjoyable, certainly amusing, and oh so wholesome. There's just not a whole lot of substance to it.

(Not that I won't probably insist on the opposite tomorrow, of course.)