all this time i thought it was an act 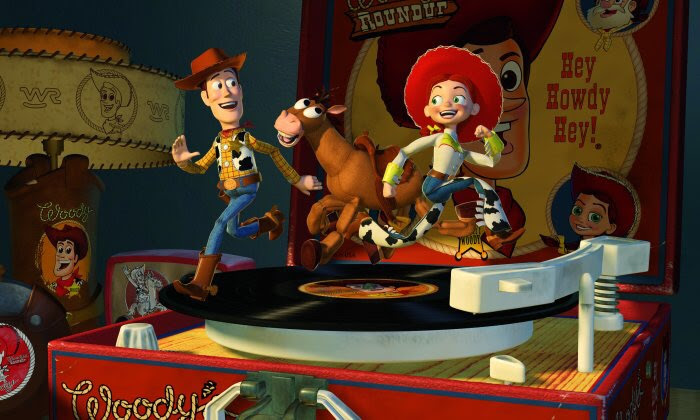 I've got a couple questions: Who is worse off--Toy Story Buzz who thinks he knows who he is (with "years of academy training" in his memory) or Toy Story 2 Woody who doesn't know who he used to be (with years of cowboy adventures behind him)? Who are these toys, really? Hell, they choose to be toys; the "rules" are apparently voluntary and can be broken. They choose to live in servitude of an owner--recall Woody saying, "It doesn't matter how much we're played with. What matters is that we're here for Andy when he needs us. That's what we're made for, right?" It's a strange existence, built to be "played with" by others but having full consciousness of it.

When Toy Story was on earlier--right now, I've got Toy Story 2 playing--I was talking with my daughter about there maybe being some metaphor or allegory for the practice of slavery in the way these toys exist for the sake of others... the difference being the (apparent) choice aspect. More like indentured servitude, I guess. Buzz in the first film is then the new arrival, and he has to fall in line so things are good for everyone. Woody's jealousy is representative more of a protective feeling for the order of things.

But, back to the identity thing... who's worse off? We must answer a few things before moving on. First, when is the movie set? While the whole transition from cowboy toys to spaceman toys suggests something much older the the 90s, Barbie specifically tells us that the Buzz Lightyear line of toys came out in 1995 (the same year the first film came out)--sure, that line is part of a joke, but it's still there. So, Woody is an old toy, nearly forty years. How long until he lost his memory? Is that a normal thing for old toys? An evolutionary adaptation to deal with the kind of situation Jessie talks about in Toy Story 2. Except, there's no way that toys could have evolved. Their existence is quite literally beholden to a creator (in addition to an owner). I think I've already said they don't really have free will. They also cannot really make of themselves what they want. They serve a specific role and are supposed to serve a specific role forever... or until they end up in storage or a garbage heap or are destroyed (like all the main toys here nearly are in Toy Story 3).

Imagine a world in which toys don't pretend they are inanimate but instead are alive and active when with their kid. Woody would be sheriff, Buzz would be a space ranger, Rex would be as scary a dinosaur as he wants to be. I found what is apparently a sermon from a youth minister named Luke at a Presbyterian church in New Zealand that is about Toy Story and identity, about how

The concept of identity is significant. Who we are shapes what we do, but what we do also shapes who we are...

It's not particularly profound, but I found it interesting that it even exists. The concept is real, though--so I gotta wonder, if these toys simply live to serve, than they remain servants. Robert Velarde, author of The Wisdom of Pixar: An Animated Look at Virtue, offers up the usual Christian terminology that fits this situation pretty well; these toys have a calling.

I think of Stinky Pete lamenting, "You don't know who you are." But, doesn't he? Sure he doesn't know about Woody's Round-Up and Jessie and Bullseye and the Prospector, but so what? I know some people obsess about their ancestors and where they "came from" but if they just accept who they are in the present, does that mean they are somehow... less?

Where does the self lie? As a conclusion to your past experiences or as the present, only? Or both.