i'm so glad you're not a dinosaur

In the past 24 hours, I've watched Toy Story, Toy Story 2 and five Toy Story shorts (don't know the proper order, but they are the three "Toons" Hawaiian Vacation, Small Fry and Partysaurus Rex; Toy Story of Terror! and Toy Story that Time Forgot). For the record, I have never seen more than a couple minutes of the Buzz Lightyear of Star Command cartoon. Right now Toy Story 3 is playing. The "end" of the feature story, of course, leads into those shorts; they are all set after the toys become Bonnie's. Still, it is an ending of a sort of the story of these toys.

(Those shorts focus more on other characters more than, say, Woody or Buzz (except Small Fry) or Jessie (though the climax of Toy Story of Terror! does depend on her). Instead (taking the order above), they focus on Barbie and Ken (minor nitpick: Barbie and Ken stay at Sunnyside at the end of Toy Story 3, so they really shouldn't be with Bonnie's toys), a fast food restaurant miniature version of Buzz, Rex, a bit of Jessie but also Combat Carl (who is not one of Bonnie's toys), and Trixie and Rex (with some Mr. Pricklepants to make it interesting). I'd like to see a short that focuses on Buttercup the unicorn. Like Francis in A Bug's Life, the juxtaposition of a stereotypically masculine personality in a feminine guise, Buttercup leaves room for some interesting storytelling.

(Of course, the discomforted looks from Buzz and Woody when they realize Ken wrote the note with the nice handwriting at the end of this film suggests that maybe it would actually be a little Markward for Pixar to get into telling a story that really explores gender identity--Brave offers us an independent, strong-willed female but it doesn't really invite us to contemplate the implication of such a thing. Instead, her story turns into what would otherwise be classified as a masculine adventure (Need I go back to the my oft-cited Groundhog Day reference, Daughton (1996)? The basic gist--and not just from Daughton--is that a masculine quest is outward, feminine inward.)

The usual theme of toys existing for their owners was covered well in all three features and revisited in Toy Story that Time Forgot. The idea of toys as disposable and/or collectible bits of plastic was covered in Toy Story 2, Toy Story 3 and Toy Story of Terror! There's got to be something else worth exploring. The politics in at Sunnyside Daycare here in Toy Story 3, for instance--that's an interesting take on toys, especially old toys.

Maybe I'm weird. But, I want something more deliberately thoughtful, perhaps, instead of the incidental (but, I don't mean to imply unintentional) emotion we get in the features. Right now, Buzz just found some of the Sunnyside toys betting on the a See 'n Say. It occurs to me that the See 'n Say might have a personality of its own. Mr. Spell did. Etch did. And, they are treating the See 'n Say like an object. 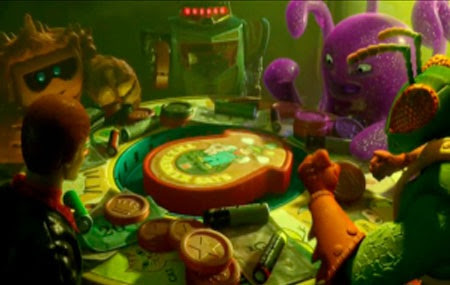 Which brings up a tangent about how (and I don't mean in any existential sense) toys have personalities at all. Does it require a face? RC has eyes. But, the "hooker" in Sid's toys has no face at all. And Sid's Ducky's head was a Pez dispenser; do all Pez dispensers have lives of their own when we're not sucking food out of their throats? At what point does a toy get a personality? Being played with imbues them with personality...

(I had a toy truck--with no face at all--that took on a good bit of personality after years of play... looked a bit like this: That thing could do some serious tricks and often played the villain.)

...with realness a la The Velveteen Rabbit. So, I've got to wonder about, say, Etch. Could Woody's interactions with Etch have given Etch his own self? Or does it take an owner? If so, how do we explain Stinky Pete?--

Chuckles' story about Lotso is awesome, both a play on Jessie's story from Toy Story 2 and something new, even darker. Reminds me a bit of The Usual Suspects for some reason, more a myth than a real story, which sort of universalizes it for the rest of the toys--what can go wrong when you are lost.

It also sets a counter to the Stinky Pete story. A toy doesn't have to be unwanted to turn bad. There would be just a bit too much determinism in that.

--So, why do some toys gets personalities and some don't? Plot convenience? Realistically, yeah, that's pretty much it. But, the overthinker in me wants to figure out an in-universe explanation. The See 'n Say has faces on it, and has voices, yet it's just a glorified table/slot machine.)

As Toy Story 3 comes to an end and the original is about to begin on this Day 7 with Toy Story, I can finally get to some sort of point. Like Andy changes, getting older, heading off to college, so do the toys, really. We may all (figuratively speaking) have our Andys and our Emilys (even our Daisys) who leave us to our own devices just when we most need them. But, we can figure things out, move on with our lives. And, not be dinosaurs.

Being actual dinosaurs would be awesome.

An interesting image comes at the end of Toy Story 3 that leads me into this final discussion of Toy Story. 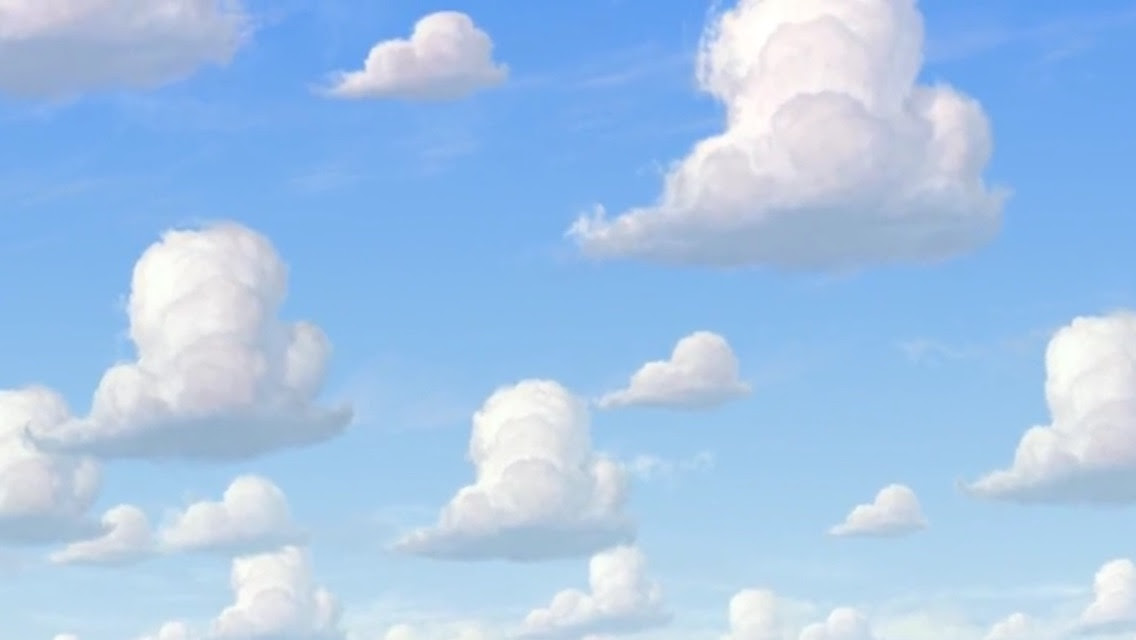 But, not just clouds. The same clouds repeating. Pixar by the time this movie came out had managed huge amounts of very realistic detail in their animation, including animating hair and water. Yet they pan up from Andy's toys transitioning to being Bonnie's toys to these obviously fake clouds. Where did we see those clouds before? 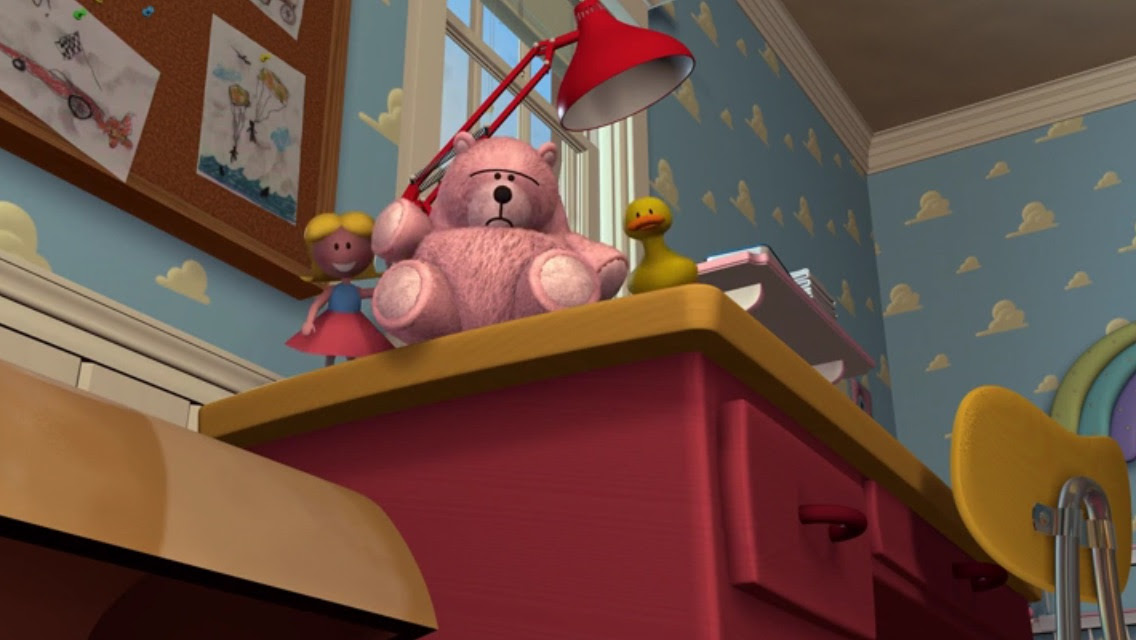 Andy's room. In the house he leaves at the end of the original film. Pixar could already do better clouds even in the first film. So, this is on purpose. A deliberate callback to the original for a nice sort of poetry... But also, a thematic loop. Andy is heading off to college and the toys have been left for Bonnie in a larger "room" where the Pixar writers and animators have been playing with these toys for a decade and a half. Including Andy and Sid and Molly and Emily and Bonnie. Movies are Pixar's playtime, all their animation programs and character designs making up their toybox.

This loop back around to the beginning bookends a chapter in Pixar's history. The fourth Toy Story (announced but with most details sounding more like rumors than anything concrete) needs to be disconnected from these toys and this storyline because returning to the old characters is a dinosaur thing to do. Pixar just loves to move forward, come up with new animation techniques. Some pretty good flames and smoke in Planes: Fire & Rescue if I remember correctly.

But, separate from Pixar, Toy Story--the three films together--is all about dealing with being forgotten, with getting old. These films are stuck on mortality and all that comes with life. We're made a certain way, but ultimately, we can be something else. Buzz can get over his Space Ranger delusion, Lotso can stop just being a cuddly teddy bear... Yeah, it isn't all positive. We can be raised to be good--and, really, aren't we all? I mean, yeah, hate group members have kids and raise them into their way of life, but I think we can assume they at least think they're raising their kids to be good. Anyway, we can be raised to be good and turn to bad...

Actions that others deem bad. I don't think anyone ever turns bad. Call me moral relativist or what have you, but I think actions can be bad but people can't. The key is trying to do good. Trying to do new things, too. Reinventing and reconstructing yourself from time to time, just to make life interesting.

Anyway, Toy Story is done. Tomorrow, a documentary as this month about identity an self moves forward.