it does not exist for you

Adorno, perhaps. This: "writing poetry after Auschwitz is barbaric."

Which isn't what he said. Not really. Brian Oard, in his Mindful Pleasures blog, points out that this quotation is "always taken out of context and rarely footnoted." Hell, I quoted it indirectly from a study guide that has no clear author and which did not identify the specific source for the quotation. Fortunately, Adorno is well enough known among those who know him--he's come up, for me, in my undergraduate history program and my graduate communication program--so a quick google search and I've found more specific reference. The line is from a 1949 essay, "Cultural Criticism and Society." In a bit more context (from an English translation of the collection Prisms):

The more total society becomes, the greater the reification of the mind and the more paradoxical its effort to escape reification on its own. Even the most extreme consciousness of doom threatens to degenerate into idle chatter. Cultural criticism finds itself faced with the final stage of the dialectic of culture and barbarism. To write poetry after Auschwitz is barbaric. And this corrodes even the knowledge of why it has become impossible to write poetry today. Absolute reification, which presupposed intellectual progress as one of its elements, is now preparing to absorb the mind entirely. Critical intelligence cannot be equal to this challenge as long as it confines itself to self-satisfied contemplation. (p. 34)

Dense stuff, sometimes, Adorno. But, it should be clear, at least, that he is not actually suggesting that we cannot write "poetry" after Auschwitz, or that we should not. In "Barbarism: Notes on the Thought of Theodor W. Adorno," Anna-Verena Nosthoff argues, "the aforementioned dictum was not a verdict intended to silence poets or artists." In fact, she says, he

calls for arts and culture to respond from within and in the face of an inescapable aporetic condition. Namely, to write poetry after Auschwitz means to write from within a differend--a radical chasm between the signifier and the signified that one neither ought nor could overcome via writing or aesthetic means in general. Yet, poetry (and also art and thinking, per se) as a form of active engagement with sociopolitical realities, has to respond to the ungraspable (i.e., the Holocaust); it cannot simply avoid doing so. It permanently has to speak whilst knowing that it will never reach the addressee; that it must fail in speaking.

Foer doesn't shy away from writing about these "ungraspable" subjects. His next novel, Extremely Loud and Incredibly Close deals not only with the bombing of Dresden but also the World Trade Center attack of September 11, 2001. The point is not that "poetry" is impossible in the face of such things but that poetry is fundamentally redefined by these things, just as a person must be. For example, here in the movie version of Everything Is Illuminated, Lista (Laryssa Lauret), the woman Jonathan (Elijah Wood) finds at Trachimbrod remains the sister of Augustine, who saved Jonathan's grandfather. Sure, she doesn't seem to know that the War ended decades ago (and she has never been in--and refused to ride in--a car), but otherwise, she seems lonely and strange only in her isolation. While I have not read Everything Is Illuminated--

(I had trouble dealing with Alex's narration when I tried reading this book after I read Extremely Loud and Incredibly Close and then got distracted away from it by some reading or another that I had to do for school.)

--I have read in a couple sources that Lista may actually be Augustine, just having gone a little crazy over the years, or perhaps years ago. One of the last things she does in the book is mention the baby she has to take care of. The only baby figuring in the story so far is the one with which Augustine was pregnant, the one that was shot by a German soldier. The movie plays as if Lista an Augustine both existed before, and there is little reason to doubt what Lista says. The book, I guess, plays it differently. Grandfather (Boris Leskin) turns out to be someone other than the man he has been since the war. And, Jonathan is decidedly not the real Jonathan Safran Foer.

People are transformed in relation to the Holocaust, to any of these "ungraspable" events. But, people must keep going, changed but continuing. Similarly, "poetry" must keep going, changed but continuing. Sometimes, one can find the most pain or the most joy in poetry, in prose, on film, on television. The layer of reality that separates the words or the images from the three-dimensional reality around us does not detach us from the strong feelings, the horror or the fantastical joy, but rather offers us a cushion that makes it easier for us to take in that which might otherwise overwhelm us. Something I have always loved about movies is not the escape aspect--I know that is often cited--but the intense gravity of a great film (like a great novel or a well-constructed television series or a sublime poem) that pulls me in. Whether I can identify with a specific character or not, I find myself in the scenes, with the characters. It is not an escape from my own life but an enriching of it. I am adding this experience, these people, these settings, these scenes, to what my life already is. Each film becomes a part of me (and, maybe, I of it). 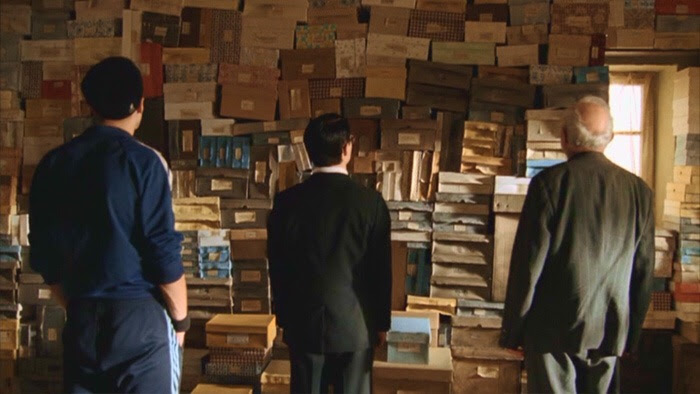 Oard quotes from another Adorno piece--Negative Dialectics--a bit that seems quite relevant here in relation to Grandfather or Lista...

If you really think about the most horrendous things done there, or in other concentration camps, or elsewhere throughout the war, or in the years since, the years before, if you really think about the worst things of which we humans are capable, it does seem a question worth answering (not that I am in any way suggesting that there is not an answer): how can you go on living?

--especially whether one who escaped by accident, one who by rights should have been killed [like Grandfather or Lista], may go on living. His mere survival calls for the coldness, the basic principle of bourgeois subjectivity, without which there would have been no Auschwitz; this is the drastic guilt of him who was spared. By way of atonement he will be plagued by dreams such as that he is no longer living at all, that he was sent to the ovens in 1944 and his whole existence since has been imaginary, an emanation of the insane wish of a man killed twenty years earlier. (pp. 362-363)

If one is in fact imaginary, like Grandfather or Lista, merely products of Jonathan Safran Foer's pen, how much harder must it be to go on living?