the answers can be found in the mtv video games

Take Heathers as a metaphor instead of a dark comedy (or rather both) for the moment. In context, the deaths are real, but the point is not about life or death, not literally. Think in adolescent/teeanger terms, instead. This is about that life or death. Veronica used to be friends with Betty, still sort of is, but now she's with the Heathers, and that limits access. High school cliques, when they are clearly drawn--i.e. especially the cinematic incarnations of high school cliques--don't mix well. Watch that bit in... it's either 10 Things I Hate about You or The Faculty--or maybe both--where the cliques are spelled out in front of the school, and each one has its own space apart from the others, and it's all neat and discrete. The population of the school seems a little small, of course, with a singular popular girl clique, or a singular jock clique, or a singular stoner clique, but if movies dealt with public school student numbers realistically, there would not be room for story.

Anyway, my point, because for a change I don't feel like belaboring it, is this: for someone like Veronica, being in with the Heathers is life or death, social life or social death. I don't speak much from experience, though, not real-life experience, anyway. MY school was miniscule. But, on the other hand, I do speak from experience, inasmuch as I've seen so many high school movies... Just off the top of my head:

Heathers
10 Things I Hate about You
The Faculty
Pump Up the Volume
Mean Girls
She's All That
Can't Buy Me Love
The Breakfast Club
Fast Times at Ridgemont High
Porky's (and its sequels)
Can't Hardly Wait
American Pie (and its sequels, though I think I've only seen one of the sequels)
Some Kind of Wonderful
Jawbreaker
Clueless
Pretty in Pink
Sixteen Candles
Say Anything (sort of)
High School Musical

And, I'm sure I'm forgetting something obvious (and a whole lot of not-so-obvious ones). Nevermind the implication of cliques in the stereotypes in slasher films, as well. In cinematic terms, we need cliques. We need characters to be easily definable right away so we can get on with the plot. Even if they are going to buck the system and step outside the clique boundaries, you gotta define those boundaries first to let us know that anything untoward is going on.

Of course, then you've got outsiders like J.D. who don't have a clique. Mark Hunter. Kat Stratford. John Bender. If the outsider is lucky, there are other outsiders with which to spend time. Lloyd Dobler's got a few friends. Jim, Oz, Kevin, and Paul have each other. As do Tommy, Billy, Pee Wee, Meat, Mickey, Tim and Brian. Be outsiders together. Get into some hijinks and pranks and whatnot and you've got a movie plot.

Roger Ebert begins his review of Heathers by describing how he approaches this type of movie "as a traveler in an unknown country, one who does not speak the language or know the customs and can judge the natives only by taking them at their word." The thing is, in movies, the customs are pretty much the same, and the language varies a bit, but it's easy enough to get the hang of. Something might be "very" or it might be "fetch" or, hell, it might be "station." We get it as much as we need to get it. 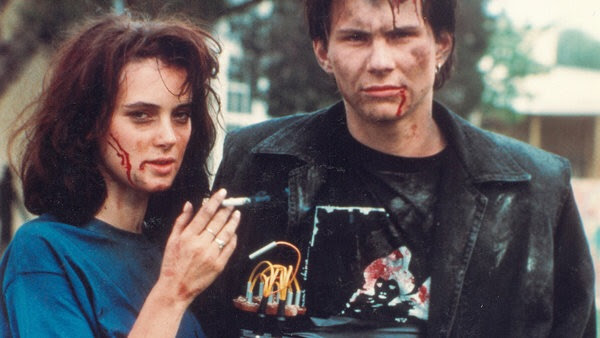 It's a movie. We're supposed to understand. Even if only in context.