you don't come from where we live

Return to teachers. Get a little Roger Ebert in at the top for the transition back to the sort-of-ongoing theme...

"Dangerous Minds" tells another one of those uplifting parables in which the dedicated teacher takes on a schoolroom full of rebellious malcontents, and wins them over with an unorthodox approach. Movies like this are inevitably "based on a real story." Maybe they tell you that because otherwise you'd think they were pure fantasy.

He calls "this version" of the story "less than compelling." I mostly remember this movie in pieces. I worked at a movie theater in 1995 when it came out (20 years and 3 days ago). The movie opened #1 at the box office. If I remember right (and I probably do), our theater also had Something to Talk About (#4), The Net (#6), Casper (#13), Batman Forever, and Braveheart at the time. (Saw a lot of movies in the six months I worked there because in addition to being able to see our own theater's movies free, we had a deal with a theater a block away, as long as we arranged it ahead of time, to see movies there, too.)

Oh, this bit with LouAnne Johnson (Michelle Pfeiffer) reading about assertiveness--she's a marine, so it's hard to believe that the real Johnson put into her book, My Posse Don't Do Homework that she went out and bought a book about assertiveness; hell, movie Johnson abandons the book for a bit of attitude... and some karate. (In an English class. Hence why TV Tropes calls her a Badass Teacher as well as a Cool Teacher.) She basically challenges the students to some karate then tell them she's not allowed to touch them. So, she teaches them a few moves... definitely different from John Keating wandering out of class and getting the boys to follow.

Ebert is cynical about Johnson's teaching style. He writes:

What, exactly, will these disadvantaged inner-city kids accomplish by being bribed with candy bars and the "relevancy" of Bob Dylan? Can they read and write? Can they compete in the job market? An educational system that has brought them to the point we observe in the first classroom scene has already failed them so miserably that all of Miss Johnson's karate lessons are not going to be much help.

My bleeding-heart-liberal side is rearing his head, here. Because, a) can they read? Well, they managed pretty well with what she wrote on the board before the karate bit--

I AM A US MARINE
ANYBODY KNOW ANY KARATE?

--and Callie (Bruklin Harris) not only knows what a verb is (Johnson's first actual lesson), she's already mentioning possessive pronouns that day. b) Can they compete in the job market?

Can they compete in the job market? Is that really the measure for success? Is that what a high school English teacher is supposed to be worrying about? I prefer John Keating to Roger Ebert's (apparently) ideal teacher. LouAnne Johnson is closer to the former, getting her students to read poetry to get them figuring out basic sentences. If you can read poetry, she tells her students, you're ready for anything. Of course, they've still got violence to deal with. They don't just have overbearing parents who want them to go to medical school--that's the white privilege version of these kids' problems. They've got gangs to worry about. 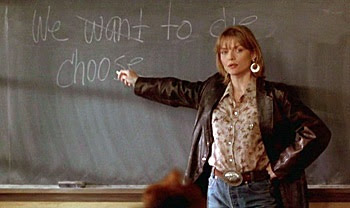 The Bob Dylan lines (which the real Johnson didn't use; there was no Dylan-Dylan contest, she used rap lyrics) that finally get the involvement of Emilio (Wade Dominguez)--

I will not go down under the ground
'Cause somebody tells me that death's comin' round
An' I will not carry myself down to die
When I go to my grave my head will be high.

--are all about dying, and death is on the minds of these students, implicitly. But, so is life. It's like Johnson and Keating are on opposite ends of a spectrum; there are still universal problems shared by their students, teenagers trying to figure their lives out, but the specifics separate the films for sure. Ebert makes an interesting comparison, Bob Dylan in the 1960s to the rap music in 1995, "giving voice to the hopes and angers of a generation." The film is friendly to the white audience, of course, because it's really just got that one rap song ("Gangsta's Paradise"). With more palatable music, and Bob Dylan instead of rap music, the movie starts to seem a little self-indulgent and celebratory of white privilege, like LouAnne Johnson is just the latest to take on the White Man's Burden of educating the lesser races... which kinda bugs me now that I think about it that way. Ebert says,

The movie pretends to show poor black kids being bribed into literacy by Dylan and candy bars, but actually it is the crossover white audience that is being bribed with mind-candy in the form of safe words by the two Dylans. What are the chances this movie could have been made with Michelle Pfeiffer hooking the kids on the lyrics of Ice Cube or Snoop Doggy Dogg?

And, I'm just going to let him have this one.

The answer to that question is in the absence of rap from the movie, and the way the score swells shamelessly when Emilio the rebel finally hears some Dylan he likes, and stirs from his insolent sprawl to say, "read those lines again." As a graduate student I was on a year's fellowship at the University of Cape Town, and taught once a week in a night school in a black township. The students were preparing for an examination that might get them into university classes. The syllabus was the same as for the white students, and we studied Shakespeare's The Tempest. There was irony there: young people living under apartheid, in a township where the necessities of life were scarce, after a long day of manual labor, studying Shakespeare so that they, too, could take a test that for white students would be second nature.

Compare Dangerous Minds to Stand and Deliver. Both based on true stories, both about underprivileged teens working with a teacher who figures out how to get to them, as if it's magic. But, Jaime Escalante isn't some white guy coming into a neighborhood that isn't his. LouAnne Johnson is.

The moment where "Gansta's Paradise" comes back into the movie is telling. Right after the line "You're dead." And, right before Johnson visits the mother of two boys who have been taken out of school... That exchange:

I know who you are. You're that white-bread bitch messin' with my babies' minds.

I beg your pardon?

My boys don't go to your school no more, and that's gonna be it.

You took 'em out of school?

You're damn right, I did. I saw what they were bringing home--poetry and shit. A waste of time. They got more important things to worry about.

Don't you think that finishing high school will be valuable to their future?

That's not in their future. I ain't raising no doctors and lawyers, here. They got bills to pay. Why don't you just get on outta here. Go find yourself some other poor boys to save.

A piece in Think Progress just yesterday (it's pretty good, and has links to an amazing, and somewhat disturbing two-part This American Life podcast) argues that, despite our national mythology, and the idea that we desegregated schools decades ago, "desegregation did not begin in earnest until a decade after Brown [v. Board of Education], and the Supreme Court started putting limits on integration a decade after that." Not to mention the white flight to better neighborhoods, better schools, community resistance to bussing...

Forget 1995. Do we care today that our schools are still segregated, that some schools will fail their students. (And, I don't mean giving them failing grades, of course; I mean not giving them a reasonable, useful education.) Some schools just can't help it. There is not always a Jaime Escalante or an LouAnn Johnson or a John Keating waiting around to inspire an interest in education. Too often, that mother above ends up being right--this stuff just isn't useful to the reality of some of these kids' lives.