Ned Ryerson is going about town on what should basically be a local holiday with his briefcase, as if off to work. I have never found confirmation that schools in Punxsutawney get the day off, or that workers might. Anyway, I figure Ned would carry that thing around whether he had to work that day or not, the way he holds it close when talking; it's like his comfort briefcase. But anyway, the scene in Ned's office--Ned working as Phil's body falls past--didn't make it as far as the final revision; presumably, once the tall building available was posing as the hotel, it just didn't work to also have Ned's office there. But, Ned is present for Phil's suicide. Phil does his swan dive off the Pennsylvanian Hotel tower and

Somebody screams, and a crowd immediately forms around a spot on the sidewalk.

Ned Ryerson pushes through to the front.

NED
Phil! Phil Connors! I thought that was him! Gee, I wonder if he had life insurance.

It's silly, but it's almost believable.

The conversation with the priest is long gone by the time of the final revision, but there is still a church scene.

Phil enters, sits wearily in one of the pews and bows his head to pray. Behind him, light is pouring through a beautiful stained glass window. Desperate and with no place left to turn, Phil prays for help. Suddenly he hears celestial music. It builds and swells, filling him with hope, inspiring him with faith. Then just as he's about to reach some kind of true epiphany, the music seems to stick on the one off-key note, which just keeps sounding over and over.

Phil looks around and sees an organ tuner up in the loft working on the church's old pope organ.

The organ tuner starts to apologize, but Phil just shakes his head and exits.

This scene is interesting to me. I don't think it's a very good scene, but I am intrigued by its inclusion since Harold Ramis was "Buddhish" and the film avoids just explicit reference to religion. Hell, even on "god day" Phil claims only to be a god, not the god. In Rubin's original, Phil decides to be a benevolent god. He's been punching Ned Ryerson every day and has forgotten the reason. He sees Ned and says, in voiceover:

It had been so long. I couldn't even remember who this guy is. It was like a war that generations have fought for so long, they had forgotten the cause. Gods don't wage war. [Phil clearly hasn't studied mythology or religion.] At least, I was going to be the kind of god who didn't. (Rubin, 2012/1990, p. 51)

Then, Phil lets Ned talk and the exchange has the basic beats of Phil's first interaction with Ned in the film. Again, with the voiceover:

Phil's sense of being a god is more interesting in the film--no presumptions without evidence (seriously, has Phil heard nothing about mythology or religion?) and the idea that Phil has a) been punching Ned every day or b) somehow been avoiding Ned often enough (in Rubin's original, Punxsutawney is a smaller town than it is in reality or the film) that he could have forgotten who he was--well, that is a stretch. Film Phil gets to the god thing by a twisted version of Occam's Razor; he has ruled out everything else and after a very long time in the loop, he has yet to explain what's going on, so he must be outside the normal spectrum of humanity. And he doesn't have to be benevolent or malevolent, he just has to know a lot of stuff.

Doris' best line is still in the final revision. I still wish it would have made it to the film. In case you're new, picture the exchange. It's "god day" and Phil has just told Rita that he's a god. Doris is trying to take their order as Phil is explaining how he has died. Then there's this:

PHIL
--but I always wake up the next day without a scratch, without even a headache. I'm telling you, I'm immortal.

RITA
Why are you telling me this? 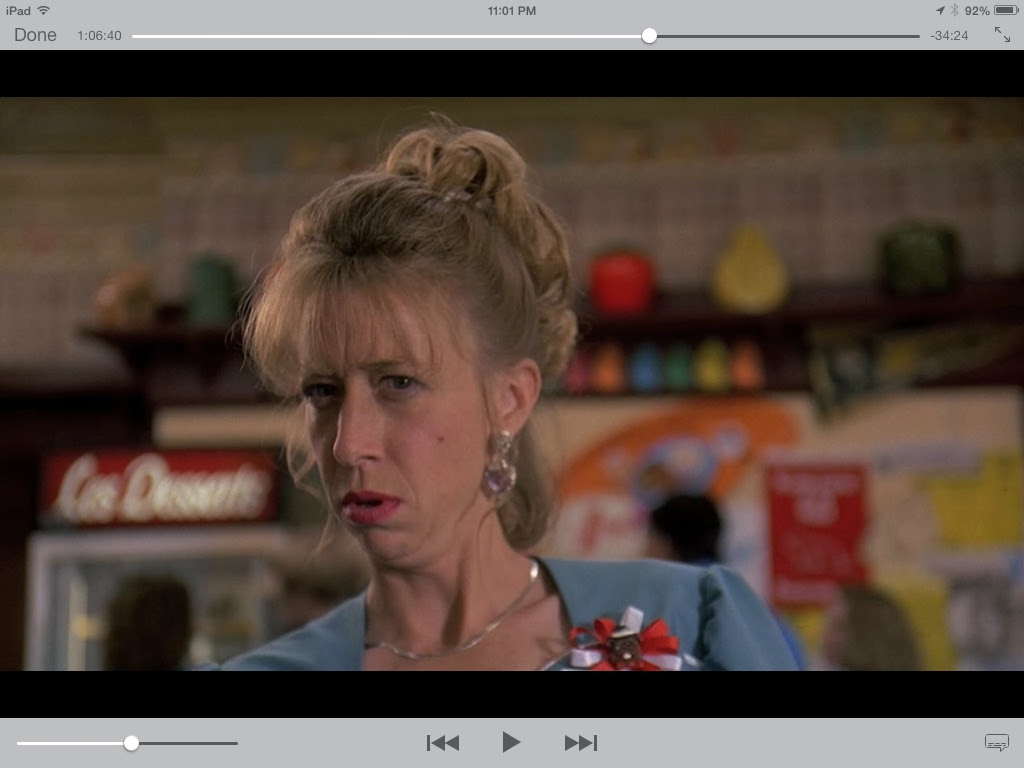 That line ought to be in the film.

Superfluous detail (like the deleted scenes): when Rita's in Phil's room at the end of "god day" and they're throwing playing cards into the hat, Rita asks, as she does in the film: Is this what you do with eternity? Before they get to Phil saying, That's not the worst part, Phil and Rita each have another line:

PHIL
Now you know. It's like waiting for a bus that never comes. You should see me play pool--and bowling, juggling, hacky sack. I can ride a unicycle.

Rita takes a slice of pizza from the box on the table.

RITA
MMMM. Pepperoni and olives. My favorite, of course. Doesn't knowing everything kind of take the fun out of things?

I'm just wondering if they got that pizza from Toni's.

Later in that same scene, instead of the film line--Gosh, you're an upbeat lady--Phil says, If you're going to be this positive all the time I may have to rough you up a little. Then, he stares at her for a long time then he belches really loud. Rita stares at him, then burps surprisingly loud herself. (p. 101) It's an odd moment.

[O'Reilly] in his usual place. This time Phil stops and hands him all the money in his pocket.

As Ned approaches Phil turns and automatically slugs him. He starts to walk away but some better impulse comes over him and he turns back to Ned.

PHIL
(helping him to his feet)
I'm sorry. Are you all right? I thought you were this horrible guy I went to high school with--Ned Ryerson.

NED
(feeling his jaw)
No, never heard of him.

It's strange to imply here that--as in the original--Phil has been punching Ned every day. Plus, given the bit cited above from Rubin's original, with Phil actually not remembering who Ned is, one could almost take Phil's line here as implying that he only thinks this guy is Ned Ryerson but doesn't really remember him. But then, Phil's "better impulse" leads to Ned more pathetic and much more sympathetic than usual, rejecting his own identity rather than admitting that Phil just has.

And, I will end this penultimate day with the final revision as Phil has just asked Larry if he has kids in the movie. I once wrote an entire entry attempting to answer that question. Turns out, I just needed to read the final revision of the script. Larry's response: No I have a cat. Alfie (p. 106).

Not too many pages to go. Just one more day.

Today's reason to repeat a day forever: to never read another Groundhog Day screenplay ever again...

...unless I can get my hands on Rubin's first revision.