slow down and obsess over the weight of life's problems

I've written before about Inside Out. In my other, less regularly updated blog, of course, but I still wrote a basic review. So, we'll skip past that.

(For context, I've seen the movie a couple times already. Tonight was a special screening with Q&A with co-writer Meg LeFauvre courtesy of Jeff Goldsmith (same as The Danish Girl last week. Saer went with me and something she said about how the parents in the film are annoying actually got me thinking...)

Structurally, Joy (Amy Poehler)--and to a lesser extent, Sadness (Phyllis Smith)--is the parent for Riley (Kaitlyn Dias). Mom (Diane Lane) and Dad (Kyle MacLachlan) are important in the overarching plot, of course, but ultimately they don't do anything special for Riley, they don't really affect the plot except inasmuch as the move to San Francisco triggers what would otherwise be a pubescent change, and none of the emotional beats belong to them; even that bittersweet core memory hug at the end of the film is about Joy and Sadness coming together for Riley far more than it is about Mom and Dad being there to put their arms around her and accept her sadness.

The movie is at the same time about the loss of childhood and about parenting, even with the absence of the parents. We learned in the Q&A tonight (and apparently there's a whole thing about this as a DVD extra but I've not watched the DVD) about how the very notion of this film came to Pete Docter when his own daughter turned 11 and her behaviour, her interests, her moods changed, and he asked himself over breakfast one morning, "What happened to her joy?" LeFauvre has two kids herself--had them, she explained right when she was supposed to be settling down as a writer after quitting Jodie Foster's Egg Pictures--and her special needs son has used the film's terminology to explain how he is feeling.

Before I get into more about Joy and Sadness, I think it's interesting how a couple small details evoke some inner truths about Riley's parents as people. Those details: that the central figure inside Mom's head is her Sadness and the central figure inside Dad's head is his Anger. They also include, though pretty much just as a punchline, the idea that Mom had a relationship with that helicopter pilot, the memory of which she's holding onto. If the movie had more time for the parents--and I am not suggesting that it should have--we might get a picture of a woman who settled for being a wife and mother when she wanted something more from her life, and a man who got into... whatever business he's in but regrets the stresses it puts on his life, his marriage and his family.

But, just as the movie leaves Mom and Dad at the side of the story and apart from the plot, I will leave them to the side of this entry. 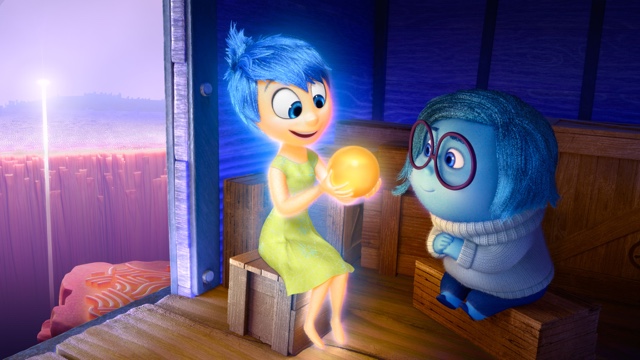 Structurally--as I said above--Joy and Sadness are the parents here. Compare the film to, say, Finding Nemo. Marlin and Dory search for the missing Nemo. Here, Riley is not missing in any literal sense, but the basic plot works as if she is. Joy/Marlin has to learn that she/he doesn't know everything about taking care of Riley/Nemo, with the help of Sadness/Dory. Throw in a little Bing Bong as... Bruce the shark? Crush the turtle? Meanwhile--and here the two plots differ significantly--Riley is isolated from other characters while Disgust, Anger and Fear have their own part of the story, whereas Nemo meets up with all those other characters in the dentist's aquarium.

In both films, the "parents" have to save the kid by going through an adventure of their own, ultimately, learning that the "parenting" style they had going on isn't going to work any longer.

I don't mean to suggest that either film is generic in its approach to the theme, though. It's a theme worth exploring time and time again...

And, it's remarkable how I can have a page of notes from the Q&A but have used almost none of that in writing this. (Same thing happened with The Danish Girl.)