you're wasting your time talking to her

Despite some of the wiggle room I might have created (or tried to create) yesterday regarding Nathan's motives, I think we can safely assume that the character of Nathan is misogynist. The big problem in the film, in terms of the men, is how much worse than Caleb is Nathan, or how much better than Nathan is Caleb? I already wrote about how Caleb makes no effort to include Kyoko in his escape plans, how he simply tries to save the girl who is willing to put out. (So to speak; there is no actual indication toward the sexual between Caleb and Ava, except explicitly by Nathan. But, that information--that Ava is capable of sexual intercourse--is offered why? Because Nathan wants Caleb to fall for Ava. Modern sexist parlance requires that sex be on the table or Caleb will not care about Ava at all. And, Nathan clearly subscribes to such parlance.)
Now, there are two paths we can take at this point with this discussion. 1) That Caleb has no (apparent) interest in also saving Kyoko, nor had he suspected that the mute maid was an AI plays on racial and gendered stereotypes (LEVEL 3) to distract both Caleb (LEVEL 1) and us (LEVEL 2). 2) That Caleb could conceivably also be an AI alters the levels of programming within the story and raises philosophical questions about free will and sociocultural programming (LEVEL 3).
I may get to both today.
Probably not.
"Unlike Ava," Kjerstin Johnson at Bitch Media writes, "we don't really get a full understanding of how much consciousness Kyoko has. Occasionally, and pointedly, the camera lingers on her face, indicating to the viewer that she knows more than she lets on." In cinematic terms, yes, lingering on her face suggests that something is going on in her head. I wonder, for example, why Kyoko spills wine on Caleb. Is it simply an accident, or is she trying to draw Caleb's attention since he is not offering it? See, the thing is, Caleb pays very little attention to Kyoko until he cannot find Nathan and finds Kyoko in Nathan's room. She is a potential source of information. She might as well be Blue Book (Nathan's search engine) or a sign on the wall. She is not a person, even though Caleb thinks she is. Unlike Ava, who Caleb does not think a person, though she is. If you get my meaning. Basically, Kyoko might as well be furniture, as Caleb dismisses her, incidentally, as much as Nathan does deliberately.
Johnson subscribes to the obvious take on Kyoko, that she "compulsorily perform[s] as the sexual object she was programmed to be--literally at the flick of a switch." To be fair, the only time Kyoko reacts as if to the "flick of a switch" is when Nathan turns on Oliver Cheatham's "Get Down Saturday Night." It certainly seems like Kyoko is acting on specific programming in that moment--an oddly specific bit of programming, to be sure--but the scene in which she and Nathan start to have sex... there is no programming cue there. We see one cue and assume the other. We see a submissive woman and we assume domination. Whether this is the reality of Kyoko's programming (LEVEL 1) or the film manipulating us to see Nathan as a horrible person (LEVEL 2) or us simply seeing the same thing that Caleb sees--a submissive Asian woman (LEVEL 3). As Johnson puts it, "Kyoko's character embodies problematic and long-standing stereotypes of Asian women--sexy, servile, and self sacrificing." Johnson then gets into the LEVELs I keep using, though not in such terms. "We can blame scumbag Nathan for building her this way [LEVEL 1]," Johnson writes, "but it doesn't explain how she was utilized in the film itself [LEVEL 2]--a foil to the white female lead." 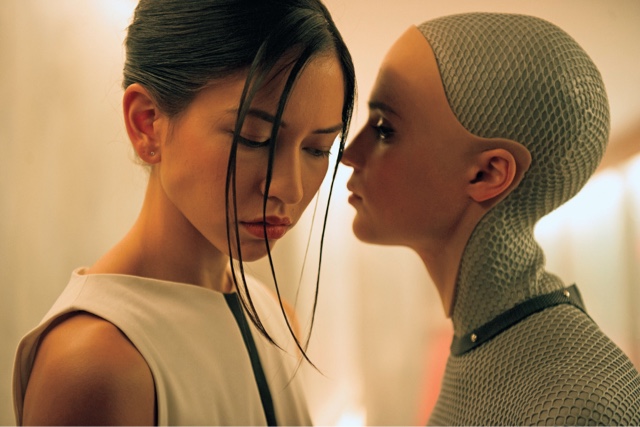 Cultural stereotypes explain that side of it... explain both sides of it, actually. Kyoko, in fitting with stereotypes about submissive Asian women, can be used by Nathan as a distraction for Caleb (or, yes, as an explicitly sexual object for Nathan himself) just as she can be used by Garland as a distraction for us. (Distraction from what, though? That will come tomorrow. The basic preview: if Caleb is an AI also, then the discovery of Kyoko as AI (by him or by us) serves as a distraction from the discovery that cannot be made except outside the text of the film. But, more on that tomorrow.)
Cara Rose DeFabio at Huffington Post argues, "Gender is a crucial component of the Turing Test." Before we move further into why she says this, I would add that putting a racial component or cultural component on top of gender would certainly make it easier for an AI to pass the Turing Test. We do not expect to communicate clearly with someone who is of a different culture, a different nationality, a different race, a different gender. Men are from Mars, Women are from Venus and all that. If Caleb found waiting to be tested a "male" AI who acted just as he did, who also liked computer programming and Depeche Mode, that would affect how the test goes. DeFabio cites the computer program that actually passed a Turing Test last year. His name was Eugene Goostman.
Add different age to that list above, because Eugene Goostman appeared in his online conversations as a 13-year-old Ukrainian boy. The differential between how he would communicate and how an adult interviewer--whose first language was English--makes passing easier. He "tricked" 33% of a panel of judges after a 5-minute conversation online. The key to his trick was, as Per Liljas explains in Time, June 9, 2014, Eugene’s "age makes it perfectly reasonable that he doesn't know anything." His foreignness also makes any awkwardness in his questions more acceptable as well. Also writing for Time, Doug Aamoth talked to Eugene, and explained that Eugene’s "answers are at times enthusiastic and unintelligible like those from any normal 13-year-old would be; add in a shaky grasp of English, and there you go." For example, Eugene asks Aamoth, "Could you tell me about the place where you live?" And, it is easy to imagine an actual 13-year-old Ukrainian boy using that phrasing. But, the best part of Aamoth's conversation with Eugene is when Aamoth calls one of Eugene’s answers "a little shaky." Eugene fakes distraction (and suggests a larger world around him as context), saying, "Damn! I've just recalled that I didn't feed my guinea pig this morning. Poor animal!"
Different issue, but the same idea: that Ava is an attractive female who (may) match Caleb's "porn profile" makes it much easier for Caleb to involve himself with her beyond the notion that she is a machine. I have written before about parasocial relationships. Thing about it like this: if we can have relationships with fictional characters or celebrities we know only through social media or reality shows, then we can certainly form relationships with machines that can readily approximate real people. Especially if they are attractive.
To be continued...