a political and moral degenerate

In those moments where I forget how much this blog has held my existence together in recent years, I do occasionally wish for time off. Sometimes, I want time off from lots of things in my life. (And, here comes an awful segue.) I figure the same is true of great leaders like Martin Luther King, Jr. as well. Watching Selma tonight and feeling a little lost... Not because of this film. I've seen it before, and I know the history of it, too.

And, damn if that explosion doesn't work really well in cinematic terms. In story terms, I don''t think this movie offered anything I didn't already know. But, my bachelor's was in history and my focus (when there was an opportunity for one) was 1960s US history. When I first saw Selma, I think I wasn't as impressed as a) a lot of other people (even white folks) were, nor b) as much as I should have been. I try to take each film on its own terms. How well does it do what it is trying to do is like the first question on an imaginary checklist in my mind. Somewhere below it is how important is the story, the themes, etcetera. I don't want or need every film to be about important things. One the one hand. But, then again, every film is about important things. On the other hand.

In retrospect, a moment that I found a little odd—in how much it breaks the momentum of this film and must have really broken the momentum of the events themselves—stuck with me. That moment when King et al back down. They will come back, march again, but that one time—and I'm curious watching this film again now, how far into the film it is, where it falls in the cinematic structure, the act breakdown. [At nearly an hour and a half in, this is structurally the end of act two.] That moment of being lost, of being stuck, of knowing you cannot win (or even fight) this particular fight... That has to be hard. (Understatement alert.)

Meanwhile, the Image Awards were tonight and I didn't watch them. Didn't even realize they were on until afterward. And, that seems a little wrong to me. Award season, the only award show I actively avoid is the People's Choice awards because that never seems like anything more than an echo of box office numbers and word of mouth. These past two days, I was Both actively seeking out my interests and neglecting my interests. Seems like a regular thing for me. I write in this blog every night like a man with too much time on his hands, and I put off writing my thesis for the rare block of many pages; the fact that I can write a whole lot of pages at a time when I do sit down to work on my thesis is the saving grace on those other days when I am working on other things. Yesterday I headed twenty-some miles away to watch the Oscar-nominated documentary shorts. Incidentally, this meant I missed the democratic debate between Bernie Sanders and Hillary Clinton. I've been making a habit of watching each debate, even livetweeting them. Just as I have award shows. I did watch the debate, but not until this evening. Watched it on YouTube. Today, though, I was out, venturing twenty-some miles again, this time to see all of the Oscar-nominated live action and animated shorts. So, I wasn't even near my phone to notice the Image Awards were going on or I might have turned them on...

The FBI notes that come on screen are the kind of thing I should have loved when watching this film. (I've got a copy of the FBI file on the Weather Underground and it is fascinating and disturbing how readily the FBI would record mundane details as if they are not just meaningful but suspicious.) I don't think I really thought about it the first time, what it meant—the federal government actively tracking this man's movements so, at any time, it could destroy him. That explosion in the opening scenes of this film, or the beatings to come later—those are horrible things but they are also out in the open. This FBI thing—it's like a cancer, hidden.

And, a few readers just checked out. And, good riddance.

In a few weeks, there's a guy named Ben Shapiro giving a talk on our campus about "when diversity becomes a problem." On the one hand, I want to hear him, I want to be there. On the other hand, I want the inevitable protest—seriously, Cal State Los Angeles is, I believe, the most diverse campus in California in terms of racial makeup, and there will be protest. On a third hand, some of what this guy says disturbs me in how completely it misses the point. Like so much of the debate lately about #OscarsSoWhite... Suggest that the voting pool within the Academy should be more diverse and people jump to some strawman bullshit about how this means the awards don't mean anything and they joke about giving everyone participation trophies. The biggest privilege that we white folks have, perhaps, is a fucked up sense of fear when our privilege is challenged.

But anyway, an example: Shapiro, in a speech I saw on YouTube, runs down someone's list of white privileges, picks at each of them. One of the first ones is about how band aids match a white person's skin tone. He cites the free market, as if capitalism (not to mention, our need for band aids regardless of the colour of our skin) somehow sits above morality or even politeness. I'm not a big proponent of capitalism, generally, but in this instance I feel a specific distaste for it because I think in this instance we should be better than the free market. And companies should be better than catering to the majority. I mean, there are enough brands and flavours of cereal at my usual grocery store to take up one entire side of an aisle. But, I am supposed to believe that there is room for just one shade of band aids? (Minus the decorative kids ones and the "sheer" ones, of course.)

The same basic argument can be fitted upon the #OscarsSoWhite issue or Hollywood itself, the box office, the free market of the multiplex. See, there is no free market in Hollywood. Selling again and again the same product is not a free market. The biggest box office draws are white men, a handful of actors who can carry a film and whose names fall regularly on the list of top box office lists or Oscar talk or both. I think of a few actors of colour who can draw an audience... A white audience, that is. A diverse audience. Someone like Denzel Washington—that image of him being whipped in Glory infused in our white brains making it okay to like him when he makes an action film. Give him a more serious drama and the audience isn't there. Critics may be, but love from critics does not decide what Hollywood will put out the next year to echo and improve upon its successes of this year. Or, how about Morgan Freeman? He doesn't do many controversial roles like Denzel's Malcolm X or The Hurricane. And, if we want to remember him kindly, we can think back on him Driving Miss Daisy. We like our black actors enslaved in some way or another. Or being funny. I'm pretty sure plenty of white folks saw Rush Hour. Which brings me to Jackie Chan. What do we want from him? Some insane action or comedy built on our inability to understand him clearly. It's almost too easy, being so bigoted. Doesn't matter what race an actor is, but if they are not white, we prefer not to be challenged by their roles. Hell, we barely like to be challenged by white actors' roles. We want everything easy. We want everything nice.

(Until we're watching something like those low budget slasher pics I mentioned above. But, that is, I suppose an issue for another entry someday. For now, I will cite the likes of Hostel. It's not about race, but it is fueled by a paranoia over the Other, the dark side of the romanticism of the exotic.)

I don't know David Oyelowo from much else beyond this film, so I cannot speak specifically to his unique accomplishment here. But, on its own, this performance is powerful. He invokes especially the energy of King's sermons. And then he's got his quieter moments. And, he is this character, he is Martin Luther King, Jr. for these two hours. This film invokes real moments of violence against people of colour, but what film(s) get more attention at the box office? The Hunger Games and its sequels, which also invoke such imagery, but as a fantasy. The science fiction setting provides separation that should give us room to really think about the problem, but instead we are dragged along with (mostly) white folk saving other white folk. I've already written about how little Katniss Everdeen actually does throughout most of that series, so I won't get into that here, but to say that our in, our POV through most of that story is a nice wholesome white girl, with enough "cool" points to impress the little girls in the audience but not so much agency that she will turn off the little boys. The Hunger Games may be an easy target but it is also an evocative example; the importance of Rue in the first film, the scenes of the poor black folk of District 11—these are just fodder to fuel us rooting on the white girl at center stage. 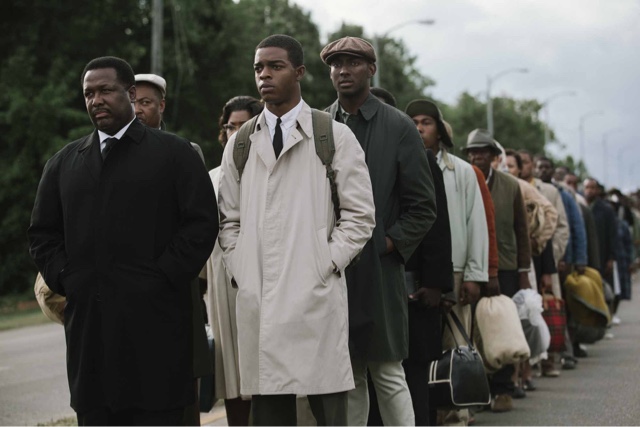