i wasn't expecting me

The Disappearance of Eleanor Rigby: Them was not supposed to exist. There were supposed to be two movies--Him and Here--but we'll get to those later. First, the amalgam.

Opening sequence: a happy couple acting younger and more in love than they will be through the rest of the movie. Next scene, Eleanor (Jessica Chastain) jumps off a bridge. A scene framed well. She walks, leaves the frame, then we hear what happens. She survives, is hospitalized and we're left to wonder how she got from Point A to Point B.

As Eleanor leaves her hospital room she also briefly goes out of frame. I've seen this film once (just the Them version as the other two, even here in LA, were available too briefly for me to get to them), but I don't remember if this is a thing, something writer/director will keep doing, let the camera remain still as characters (maybe just Eleanor) step outside the frame. [Later note: in the flashback where Eleanor and Conor dance by the car, sure enough, Conor moves out of frame and we stay on Eleanor.] A nod to filming reality (which this is not*), grounding the action.

(*recent arguments here at the Groundhog Day Project suggest that fact-based or not, this film is a true story)

Eleanor and Conor (James McAvoy) are not together anymore. She returns to her parents' house. He lives alone (apparently [later note: he's staying at his father's place]), and is prone to violence apparently as he punches a customer at his restaurant.

(Great cast here: Chastain and McAvoy, of course. Also Bill Hader as Conor's chef, Ciaran Hinds as his father; Isabelle Huppert and William Hurt as Eleanor's parents, Viola Davis as Eleanor's new professor when she goes back to school.) 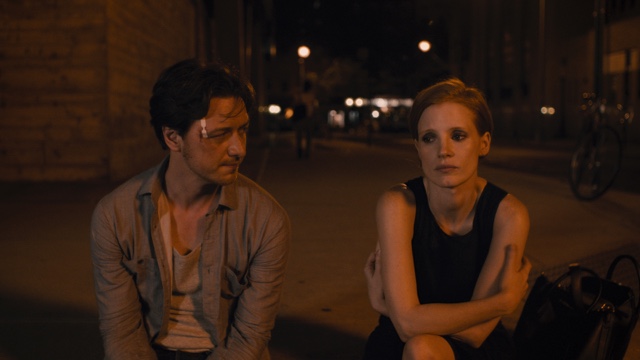 Watching Groundhog Day for a year and, additionally, other Harold Ramis films, I got to see how much he loved the two shot, frame the scene around two actors and let them interact. He does cut always and reactions shots, sure, but he loved the two shot. Reportedly, Ramis told Stephen Tobolowsky on location, "Do whatever you want. I'm setting the camera up wide. No close-ups. Comedy only happens when there is a relationship. We'll see both you and Bill at the same time. Comedy lives in the two shot." Maybe it's just the way drama (or tragedy) works, or maybe it's Ned Benson not liking the two shot, but there are not a lot of two shots in Eleanor Rigby. You get one character in the frame, or one character overlapping another (one in the foreground, one in the background), you get movement, whether the running in the opening sequence or the walking right now as Conor follows Eleanor. It's a much more... dynamic visual style. It sets mood, it sets conflict (even where there doesn't seem to be much).

The handheld camera in some shots--outside walking--compared to the stable camera inside the classroom just now, for example... On the one hand, I'm wondering if this is a split between the two intended films. I don't know since I haven't seen them (yet). On the other hand, I think it grounds this conversation now between Conor (just hit by a car) and Eleanor, when they haven't spoken in a while, in the moment while the chase was timeless or unreal or... I don't know, moving free because there's no anchor. This is a movie about a relationship that has been broken apart, of course. Conor is, arguably, without his anchor. The camera is shaky again as the ambulance leaves, taking him away from Eleanor again.

Maybe I'm imagining the stable camera in scenes where the handheld is just easier to keep steady because the action is more still. But, the effect is the same.

This is not a film that one enjoys. But, it is a film, for me anyway, that can envelope and subdue and mesmerize. Despite the pain on the other side of the screen, I find myself over there instead of here on the floor of the living room. And, I... I was going to say I like it there. But, that's not it. I remember being somewhere in the vicinity of some of the feeling there.

Conor, in a moment alone, knocks a glass bottle off a table and it breaks.

Eleanor, in a moment alone, sees the lightning bug in a jar her nephew gave her and takes it outside to free it.