or whatever you want to call it

Moving on to Him. The Disappearance of Eleanor Rigby: Him in case you're just joining us. So far, I have managed to write three blog entries on the Them version, all three of which were completed at least a half hour before the movie came to its end. This is one of those movies that just grabs me and distracts me from being distracted away from it.

Thing is, I've never seen the Him version before. So, the aforementioned problem may be exacerbated tonight.

(I also may be inclined to short, relatively self-contained comments as I livetweeted through the Democratic Debate and The Gallows earlier tonight. We'll see.)

Same Rom-Com opening as Them--the dine and dash, the park, the fireflies. Since this is Conor's (James McAvoy) version of the story, I'm guessing this will be very different right away, maybe even skip us seeing Eleanor (Jessica Chastain) try to kill herself... Yep, we cut from the titlecard to Conor in his restaurant (sorry, his "bar with uninspired food"). A new anger moment for Conor. Tells Alexis (Nina Arianda) to change the music, then when she doesn't grabs the iPod and throws it outside. After, he goes for "a stroll." An earlier walk of his than we see in Them.

Then... Interesting, he goes home to Eleanor in bed. She's apparently been in bed all day, hasn't eaten. The scene is interesting because it establishes the dichotomy of the two of them--Conor trying, Eleanor refusing. Eleanor's been dreaming he's having an affair, and she suggests he actually have one. Absent an explanation of the why, so far, Eleanor does not come off very nice, here.

Conor goes to visit his father (Ciaran Hinds). His father, Spencer, seems far less put together here, seen first in a robe while we first encountered him in a suit, about to head for his own restaurant in Them. In Them, I don't think it was very apparent that Spencer was affected by his latest wife leaving him. It was mentioned in passing and that's about it. Here, he's out of sorts, and suggesting already that Conor take over the successful restaurant.

Conor goes home, Eleanor's not there, the phone rings. Cut to the hospital. We've caught Up with the earlier point in Them. He and Eleanor have an actual conversation in the hospital. She suggests they take a break. This scene isn't necessary enough to have been needed in Them, but it works here, because this film favors Conor and this scene, like the scene in bed, favors Conor. A little bit of on-the-nose dialogue, though, as Eleanor tells Conor, "Just let me disappear for a while."

Back at his apartment, an unwanted visitor, religious guy with a pamphlet to establish explicitly (much earlier than in Them) that they lost a child. Cut to Conor and Stu (Bill Hader) in the restaurant, same scene as in Them, fight about to happen between Conor and a customer.

A bit more of them at the restaurant after. Alexis is already coming onto Conor. Conor drinks alone then goes home, sees the empty bed like in Them and tries to call Eleanor. Don't think that was in Them. Calls Mary (Eleanor's mother) as in Them then heads to his father's place. Spencer looking sharp in his suit is weird after the earlier scene. (And, I find it more odd than endearing that Spencer knows Conor's fish's name, since a) the bed conversation with Eleanor earlier established that it's been a year (or so) since their son died, and b) the earlier scene with Spencer suggested even more than other dialogue that Conor and Spencer do not spend much time together. 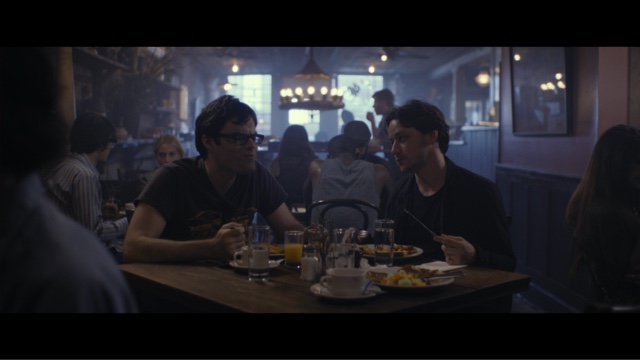 Pat Benatar scene happens as did in Them--except I think there's some extra dialogue... Conor says he's sorry. Stu specifically references Conor and Eleanor not making it before the line about flirting with extinction. And, the timing as the scene goes on is different. It's less rushed.

(If you haven't seen any version of this movie, you're probably confused by the Pat Benatar scene label, but that's just too bad.)

"Count the fucking raindrops" scene seems just the same as in Them.

Stu sees Eleanor and calls Conor. Conor runs to get there but is too late. Cut to, him following her as we saw in Them.

(Saw? That isn't right. I mean, sure, because the pair of movies (Him and Her) got turned into the one movie (Them) and Them got a (slightly) wider and definitely longer release in theaters, so more people probably saw Them then. I only saw Them, but I'm not sure if language suggesting that Them came first is correct here. It certainly doesn't reflect the reality regarding how the films were made.

Then again, this is the first time I'm seeing Him and I still haven't seen Her, so that language is coming naturally.)

Following leads to classroom (and we don't know Lillian (Viola Davis) in this version of the story) leads to getting hit by a car... Conor and Eleanor sitting on the curb--I don't think it's actually different but it seems different. It's interesting, actually, the same puzzle piece fitting a different puzzle, so it makes a different picture overall. The tone is different even though the scene is the same. The title makes more sense, here, as Eleanor feels like this foreign entity that we barely know, more like a ghost than a broken person. It's a clear distinction between Him and Them that Eleanor has disappeared. She might as well not exist. And, that makes this scene right now between Alexis and Conor play a little better for Conor. We don't know Eleanor so while we can see that Conor wants to be with her, we're not quite rooting for that to happen as much as we do in Them.

Another scene with Spencer follows. Ralph--the fish--has died. And, we learn that Spencer got the fish for Cody. Conor and Eleanor's son has a name. The interesting thing here is that Him is offering up concrete details, more of them than Them even as Conor more actively refuses to talk about his son than Eleanor does in Them. They gone to the park, and Spencer is less put together. Spencer gets the on-the-nose dialogue here (as Eleanor's father is not in Him); he's rambling about getting old and he says:

On a clear day, I can see the end of my life staring me in the face.

You know, it's fucking bizarre. One day, you turn the corner of your street and everything's changed. But you never saw it happening.

It's like it's all been sucked up into some kind of cosmic vacuum cleaner.

We all know a little something about sadness.

And, he thinks that's a nice thing to say.

Conor and Spencer's relationship is more of (not necessarily more than) what we saw (see) in Them. There's antagonism there but you can tell that these two know each other well. You can believe that there's love, or once was, between them. Much like Conor and Eleanor, in that regard.

So far, that makes this film more about Conor and Spencer than about Conor and Eleanor. After all, Conor tells Eleanor's mom (Isabelle Huppert) that he wanted the mundane daily shit back in his life. Him--so far--suggests that he's seeking that more than he is seeking Eleanor.

Of course, Eleanor just walked into the bar, they're going to spend some time together, get stuck in the rain and she'll leave him again. (Conor's line about his father losing his mind makes more sense here than in Them.)

We get to see the "last banger" at the bar. Conor and Alexis get to talk again. And she gets a good line: "It's funny how a person, just by living, can damage another person beyond repair." Conor, of course, asks, "How's that funny?" There's more of a sense of Conor relating to both Alexis (outside the scene where they had sex) and Sia (Nikki M. James) (a character I'm not sure even had a name in Them) and not just Stu. And then there's a dine and dash couple...

He doesn't take his money. There's a sense of closure.

(I almost called it an "interesting" sense of closure but then I had Clementine from Eternal Sunshing of the Spotless Mind in my head telling my to stop using that word like Joel should stop using "nice.")

I've got a notion about that, but it will wait until tomorrow.