True Romance is Tarantino by way of Tony Scott. Almost immediately, the dialogue plays like straight Tarantino. And Clarence Worley (Christian Slater) almost feels like a slightly more grown up Mark Hunter from Pump Up the Volume. Almost.

(Meanwhile, I’m here because of Brad Pitt. Or, by way of Brad Pitt. The poetry of these many degrees is almost at its inevitable end.)

Alabama (Patricia Arquette) gives us some (probably) pointless Exporration... Does that work? Exporration? Exposition crossed with narration. I wanted to get either introduction or opening into the compound word but neither one really fits with exposition or narration without just sounding like the two words mashed up next to each other instead of into each other. Anyway, it’s the usual bullshit opening stuff, life’s about to change and I didn’t expect it and all that.

(Meanwhile, I want to explain. The short version is that it was a suggestion/dare from my friend Lane, current president of our speech team—to play a little Six Degrees of Kevin Bacon all month. My immediate choice: to not explain why I was jumping from apparently random movie to apparently random movie. But, as I was making the original version of my lineup, then revising it like five times now, I realized it could go much deeper than just jumping around from film to film using actors as bridges for little more than fun and a (relatively) easy way to choose my movies from day to day. I like there to be a thesis, a running argument I can keep coming back to through the month, or at least some sort of backbone, some sort of theme.

The deeper line here is this—it’s all connected. Each movie is like a piece of a tapestry, a piece of my cinematic experience. And, the more I forced them to connect one way, the more I could see other connections. Explicit ones like other shared actors (which I’ll try to point out as I get into the list below). Implicit ones like so often happens when I start writing about just any movie—themes about identity and whatnot, the stuff I can find anywhere these days, or so it seems. Every film turns into this exercise in who and what we are when the movie was made, when we watched it, when we watch it again. Now and then are one and the same. North and Footloose and Chaplin are one and the same, different versions of the same damn universal story about what it means to be human, what it means to make choices, to seek out a future where you get to express yourself and be yourself and life is better than it was before. Dazed and Confused, The Fifth Element, Fargo—about desperate people seeking joy, seeking a little L-I-V-I-N. Zombieland, The War, Shakespeare in Love—all about putting in a little extra effort to get by. One script wraps around into another script and it’s all one big film with a whole bunch of seemingly unconnected chapters, but you watch enough of them and they all start to connect. Twelve Monkeys—one of the best movies I know—and North—one of the worst—become like a good day and a bad day in a regular life, two sides of one coin we keep flipping each and every day.) 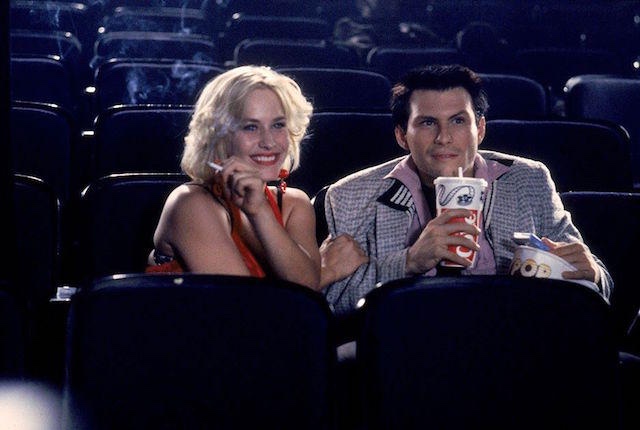 Clarence and Alabama get together quickly, marry and Clarence goes to confront her pimp (Gary Oldman, virtually unrecognizable next to his role in The Fifth Element. Why? Because, he wants a life better than before, he wants joy, he wants to get by, he wants what we all want—to live.

(And, the going is easy to explain, though I’ll leave off the ending as it hasn’t happened yet. You start with a little Kevin Bacon in Footloose, follow Chris Penn over to Reservoir Dogs, drift along with Tim Roth into Selma because you gotta get into some Best Picture nominees if you can because this is Oscar month. Tom Wilkinson will get you to Shakespeare in Love and Geoffrey Rush gets you out of there to Shine. Noah Taylor takes you to Almost Famous and Frances McDormand will get you to Fargo. Steve Buscemi, who you’ve already seen in Reservoir Dogs will now get you to Desperado and Quentin Tarantino (who you also saw in Reservoir Dogs will bring you around to Pulp Fiction where Buscemi has a small role and Rosanna Arquette (sister to Patricia) has a notable but brief role. And, there’s Bruce Willis, too—you’ve seen him in this blog before with The Sixth Sense and Die Hard but you won’t come back to him for a bit. And, Amanda Plummer (who we saw half a year ago in The Fisher King, and also daughter to Christopher who you will get to later) is in there with Tim Roth who was in Selma and Reservoir Dogs—but maybe that last link is a little bit of cheating since Reservoir Dogs and Pulp Fiction are both Tarantino films.

Frank Whaley gets you out of there and over to Swimming with Sharks and Kevin Spacey will get you over to Horrible Bosses and Jamie Foxx will get you out. That brings you to The Soloist, which links you right back to the previous month with Catherine Keener, because she had a big part in Being John Malkovich and a small part in Adaptation. But, it’s Robert Downey, Jr. who will get you to Chaplin (with Kevin Kline, who’s been this blog before with Life as a House and Silverado). Though you’re gonna get to Milla Jovovich again soon, you’ll follow Anthony Hopkins out of Chaplin to get to Amistad and Matthew McConaughey will get you back to Milla Jovovich in Dazed and Confused, and you’ll follow her over to The Fifth Element and be with Bruce Willis again to get on over to North. You’ll see Dan Aykroyd, who was also in Chaplin, and Jason Alexander (who was in this blog a good long while ago in Pretty Woman, and also in Seinfeld, which you’ve been rewatching lately when you need to pass a little time), but you will follow Elijah Wood over to The War. Kevin Costner gets you over to The Untouchables and Robert DeNiro will take you from there to Cape Fear.)

I’ve read that the Sicilian scene is one of the things for which Tarantino’s most proud, and watching it again right now, I’m not sure that’s a good thing.

(Joe Don Baker, who you saw a good while ago in this blog with Fletch, will be in Cape Fear, but you’ll follow Juliette Lewis over to What’s Eating Gilbert Grape. Leonard DiCaprio, who was recently in this blog with The Revenant, and who just won his first Oscar for that role, but why follow the obvious when you can go with Mary Steenburgen over to The Help. Plenty of interesting actresses there, and you’ll follow Emma Stone on over to Zombieland and Abigail Breslin will bring you to August: Osage County. There, you’ll see Chris Cooper and Meryl Streep who you saw last month in this blog in Adaptation. and Julia Roberts, who was here way back when with Pretty Woman, but you’ll follow Ewan McGregor, who you spent a week with last year with Moulin Rouge! over to Beginners and there you’ll find Christopher Plummer, father to Amanda, and he’ll bring you on over to Twelve Monkeys, and Brad Pitt (who has only been in this movie for like one second so far) will take you right past Bruce Willis (again) to True Romance. And, you can bet we’re going to get to Kevin Bacon tomorrow to end I out the month and these many degree of Kevin Bacon, because how else should poetry go at a blog named for Groundhog Day but to loop back on itself?

My thanks to IMDb and the The Oracle of Bacon making my life easier in making the lineup and revising it and revising it and revising it. Seriously, that Oracle site is amazing; type in any actor and get their Bacon number—Patricia Arquette, for example, has a Bacon number of 2 because she was in Flirting with Disaster with Richard Jenkins who was in The Little Sister with Kevin Bacon; two films, Bacon number of 2. You can also erase Bacon’s name and link any two actors, and if the link you get doesn’t get you the right movies or the right number of movies, you can try again. But, you do have to have a pretty good idea of who these actors are and what their movies are or it’s all just blind guesswork—)

—like trying to sell $500,000 worth of cocaine when you’ve got no experience as a drug dealer.

Meanwhile, James Gandolfini is beating up Patricia Arquette and I’m wondering, at what point does writing about bad people doing bad things turn into making excuses to make these bad people do bad things because you enjoy it? From the racism in the Sicilian scene to the violence against women here, Tarantino has some tropes he returns to maybe a bit too often. Does he show feet so often because he likes them? Probably. So, does he throw the N-word into his scripts so much because he likes that too? Does he enjoy the violence and the blood? I mean, especially if you’re limiting yourself to “ten” films you should branch out a bit sometime, try something new. There’s more to drama than criminals and violence. And, to be fair, Alabama fights back here and gets a couple good shots in, wins the fight. But, that’s just piling on the violence porn, not excusing it. I was talking... Was that today? It’s been such a long day, I’m not sure. Anyway, I was talking about how The Hateful Eight, structurally, is just a Western remake of Reservoir Dogs. And, as Chris Penn and Tom Sizemore (both in Reservoir Dogs) just showed up in True Romance, this might as well be the moment to step aside and let Tarantino’s tropes play out. Mexican standoff soon. And, I’m getting tired of Tarantino’s schtick. Even Tony Scott’s direction here can’t get far enough away from it. And it’s all just so repetitive...