I was reading recently about folklorists having a problem with Joseph Campbell and his whole monomyth The Hero with a Thousand Faces thing. The hero's journey and all that generic crap that gets recycled again and again in modern stories, especially film, especially action or fantasy.

Sara Cleto argues, in the above linked article:

Campbell's approach tends to direct the read [sic] back to themselves and their own culture. By saying, "hey, it's really just the same story over and over, we are all basically the same, and it [sic] great!" He ends up erasing the differences, and it has a flattening effect on the stories.

Nevermind my own contention that all movies are all other movies, and every story is the same story, let's side with the folklorists for the moment. Besides, my arguments regarding identity and the self suggest that the differences are what matter anyway. Sure, there may be a backbone, or several different backbones, on which all stories stand, but yes, absolutely, it's the details that matter, the little differences, the various characters, the details that allow us to connect, the moments that draw us out and make us feel something. It's like splitting your mind into separated parts a la Patrick Rothfuss' Kingkiller Chronicles or believing impossible things a la Alice in Wonderland--both things are true. The stories are all the same, but they are also all different. And, maybe it's the sameness that draws us in, but it's the differences that hold onto us. Cleto continues:

This means that readers see what they already can see, and they understand stories from different times and places as reflections of their own experience. Since it is often a white/Western audience doing this, the net result is that the stories written from other perspectives are decontextualized from their culture and repackaged as something familiar, losing a lot of information along the way.

Think the recent announcement that white actor Zachary McGowan has been cast as Hawaiian historical figure Benehakaka "Ben" Kanahele. Think Scarlett Johansson in the live action Ghost in the Shell, Tom Cruise in Edge of Tomorrow, Tilda Swinton in Doctor Strange, Emma Stone in Aloha, Johnny Depp in The Lone Ranger, all the leads in the live action The Last Airbender, and pretty much everybody in films like Gods of Egypt and The Passion of the Christ... Doesn't matter if it's a fictional story with a previous, culturally important origin, or a true story, Hollywood whitewashes it. Because a) Hollywood is cynical and believes the audience (which it cynically imagines as just as white as Hollywood itself has been historically) can only relate to characters that look like it and b) because unfortunately, that's still mostly true. Systemic racism and historically-fixed class divisions (often along racial lines) mean that the moviegoing audience is still mostly white, and--especially in America--this means the white audience will relate better to a white cast. Which is why it matters when a movie like Moonlight gets attention from the Academy, or when a movie like Get Out does well a the box office. The audience needs to embrace difference so that Hollywood can get over its biases. And Hollywood needs to produce more fare that isn't whitewashed so that the audience can get over its biases. Hollywood must treat each story as entirely unique so that it can access a larger audience. Not just cynically film extra scenes (a la Iron Man 3 or X-Men: Days of Future Past or the remake of Red Dawn to name a few) for China that are so extraneous that the American audience doesn't need to see them. Instead of, you know, a cohesive whole that plays however it plays to whatever audience is watching.

By saying "all these stories are the same," we lose what stories mean in different contexts and, especially, what they can mean to people that come from cultures that are not our own. 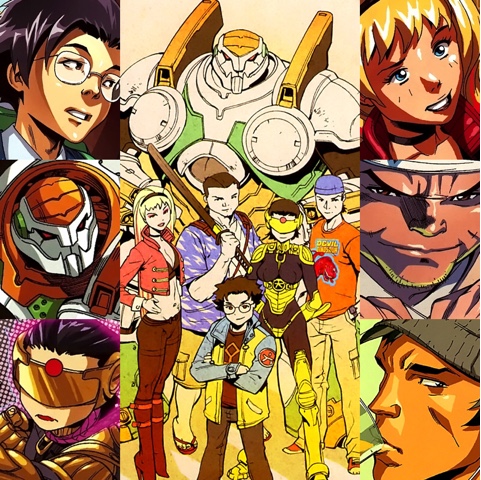 The members of the Big Hero 6 team in the movie don't resemble the members of the team as it was in the comics much at all. For the record, the comic doesn't seem to have been created by anyone Japanese, nor does it come from previously existing (i.e. culturally-specific) Japanese stories.

(Quick sidenote: my daughter just called me a "social justice warrior" (and, of course, not in any positive way) when I said it may be problematic that Hiro Hamada is half white in the film. (Since he singlehandedly improves all of his fellow team members scientific designs, though they've been working on them for years.) If you've read this blog before, you know how right she is.)

But, the comic embraces Japanese characters and Japan-centric ideas; for example, Hiro's mother is abducted by the Everwraith, "the astral emodiment of all those killed in the 1945 nuclear attacks on Hiroshima and Nagasaki." Maybe turning San Francisco arbitrarily into San Fransokyo and filling it with Japanese architecture is reverse cultural appropriation to make up for the comic... Except, the film wasn't written or directed by anyone Japanese either.

(It actually bothers me that I assumed the cuteness of Baymax--the film version--must have come from somewhere outside the West. But, Baymax is just Disney's doing. Overcommodifying something that was already a commodity. Gotta sell those action figures, and get that Saturday morning cartoon.

I wonder, at what point does it stop being fun because it's just a bunch of reconfigured cultural appropriation, twisted into kid-friendly, multicoloured fun? Is it the overanalysis that ruins it? Or is it the movie's fault (and the comic's fault) for being so exemplary of the problems we have in creating modern stories? On the surface, it's fun, it's clever, it has heart. Is that enough to forgive the negative implications within the creative process that birthed it?)

Is every story the same, so the whitewashing doesn't matter? If every story (at least the good ones, and arguably even the bad ones) reflects some aspect of the human condition and all that that phrase stereotypically entails, what's wrong with sharing the details across cultural and racial lines? What's wrong with stealing bits from one another to make good stories?

Of course, if the story is good, why paste your own biases on top of it? Why not just make it, as it is, and let us all get over ourselves?

From my perspective the movie encapsulates and affirms a certain multiracial Asian identity beautifully (however as a mixed-with-white narrative I strongly acknowledge it might not speak much to mixes of color). Hiro lives in the futuristic city of San Fransokyo which is stylish and portrayed without tokenizing. Nothing is objectified, exoticized, or othered. Hiro eats spicy chicken wings and white rice for dinner. He's a native American English speaker but holds his Japanese name with pride respectfully mirrored in the way those around him also pronounce it correctly and effortlessly. His visual world is seamlessly woven with American and Japanese iconography. It's simply his everyday lived life. As my husband said it was refreshing to see movie-makers, "Just get it."

Maybe my own privilege pisses me off so much sometimes that it's hard to see exactly where to draw the line.

Or maybe, if Hollywood could manage things a little better, that line wouldn't need to be drawn in the first place.