Tess' McGill's obvious sins in Working Girl are being ambitious and knowing more than the men around her. In the 80s business environment, that is just not how it's supposed to be.

Recently, Pamela Falk at CBS News reported that when Wonder Woman was named an honorary UN ambassador for women's issues, "some complain[ed] about her sexualized appearance." On CBS This Morning, Wonder Woman director Patty Jenkins "addressed the criticism by some that a supposed feminist icon like Wonder Woman can't also wear a sexy, skimpy outfit." She said:

I think that that's sexist. I think it's sexist to say you can't have both. I have to ask myself what I would apply to any other superhero. This is fantasy and it's not for anyone other than the person having the fantasy. I, as a little girl, like took a huge amount of delight in the idea that for my power and my ability to stop that bullion that playground, I could also look like Lynda Carter while I was doing it.

I've seen pieces about Working Girl that complain about Melanie Griffith showing so much skin so often in the film. Or that complain about her stealing Katharine's man. The latter just isn't accurate--she doesn't know that Jack was involved with Katharine until after she and Jack have slept with each other (and I mean the sex, not the initial "sleeping" together)--and the former is a pathetically usual sort of commentary on a character who is essentially feminist. Like Wonder Woman, if she is feminist she's not supposed to take off her clothes or be sexy, she's not supposed to go home with a man she's just met, she's...

Consider what we know about Tess in terms of, say, her complete lack of, say, wholesomeness. She finds her boyfriend in bed with a woman she knows and while there's a momentary bit of obvious anger--"Snake"--she actually doesn't seem that phased, like she sees men and women beside herself having sex quite often.

(Also, while unrelated to the topic at hand, I must compliment the dialogue when she finds Mick in bed with Doreen. Mick looks at Tess and says, "What, no class?" She's taking speech classes, but the double meaning amuses me. Tess responds, "No class." While Mick will seem fairly thoughtful a couple times later, notably when he compliments Tess on her makeover, he really does have "no class.")

When she wakes up in bed with Jack (and she doesn't even know who he is), she also doesn't really seem that phased. Like, she's been in that boat before, she's made that same "walk of shame" before. She also ends up at Jack's place because she falls asleep in an open cab after mixing Valium and tequila... Neither of which quite by her own choice of course, because that makes it a little less... sinful.

Fixed up with Bob Speck (Kevin Spacey), she doesn't just turn him down. She shakes up his bottle of champagne and sprays it all over him, laughing as she does it. To get revenge on her boss (Oliver Platt) afterward, she types into the stock ticker, "David Lutz is a sleazoids little pimp with a tiny little dick." Loses her job there (and, if you think about it further, is totally messing with the business goings on right then by hijacking the ticker). Not to mention the attack itself. 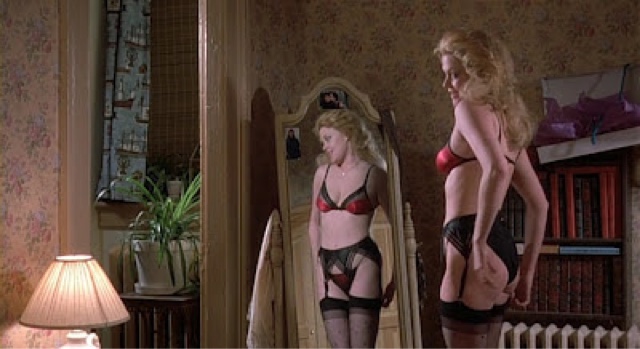 There is also her classically quotable (and utterly stupid) line, "I've got a head for business and a bod for sin." This is not a line of a wholesome, feminist character.

Of course, that right there is a bullshit position to take. Tess is Tess. Tess is a woman confident in her appearance and her abilities. She isn't afraid to use both to get ahead, and however that willingness might be portrayed elsewhere, there is nothing inherently wrong with it, and it does not negate her feminism. She can be both feminist and sexual. She can make her own way in the world of business and go to bed with her colleague. She can lie her way into a deal just like Katharine can try to steal it (and like Jack can lie to get Tess to leave the bar with him).

But, she really shouldn't body shame Katharine with that "bony ass" remark. Especially since, in the reality of the film, she fits in Katharine's clothes.

Finally, as a teacher, especially one who teaches speech classes, she really should not skip those classes as she seems to here. Seriously, they're mentioned, and she clearly skips class the night she finds out Katharine is trying to steal her idea, the night she finds Mick in bed with Doreen. But then, she never seems to go again. And, I just can't support that. You gotta officially drop a class if you're going to do that. (And, I choose to believe that she did not do that, because then my annoyance is more amusing.)