anyway, how is your sex life?

The Room isn't even playing yet. I saw Girls Trip today--it was pretty good and very funny. But, right now, I've actually got the Critical Role panel from Comicon playing on Twitch. But, Pages is open and I'm typing because, you know, who cares what order things happen anyway? The point is not that things are organized but that things are tragic. You find a woman and you stay together for seven years, live together, and she'll betray you with your best friend. You find a man and you stay together for seven years, he will bore the shit out of you even though he's fundamentally a good guy, and you will cheat on him and he will kill himself. No matter what you do, someone will betray someone, someone will die, life will suck... except for when it doesn't.

It's those moments when it doesn't suck that matter. When he brings you a new dress, or she has already ordered the pizza. As I write this I hear some lyrics from the Groundhog Day musical in my head--and it is quite distracting--from the song "Night Will Come." After a whole lotta lines about life inevitably heading toward death, the song ends on this cheesy-if-not-so-sad note:

And, for that last one you have to think about it like a novice debater desperate for a good impact chain. Any little action that you take can impact other people around you. Watch this Coca-Cola commercial--https://youtu.be/1veWbLpGa78--and tell me you've never been in a situation like that, where someone else's joy was contagious. And, don't get me started on how powerful a smile from the right person can be. Again, lyrics come to me, distracting from Twitch on the TV, these from Dear Evan Hansen, "If I Could Tell Her":

There's nothing like your smile
Sort of subtle and perfect and real...
You never knew how wonderful
That smile could make someone feel

The right person smiles at you, or sometimes even just near you, and all the darkness goes away. Politics forgotten. Mortality forgotten. Every miserable detail left behind for that moment. And all is good.

Then, the Critical Role panel ends, I go put the leftovers from the burritos I made for dinner in the fridge, set the pan to soaking to wash later, go to the bathroom and I am both thinking back on poetry within this blog--RE: Stories We Tell, which I'll come back to in a moment--and a lamentable sense that poetry ain't worth much in my life anymore. Like this bit I wrote recently, which is more stream of consciousness journaling than poetry:

But you still want to write something beautiful
As if you can still woo a woman with words...

There's more, of course, but those were the lines that were in my head. And, I wonder what Lisa ever saw in Johnny. Seven years ago, who was he? Did he have ambitions? Considering he works in banking and she works with computers, what was the connection?

And then, as Johnny wakes and walks across the bedroom naked, I find that Stories We Tell entry with the poetry. Not the only bit of poetry in this blog, of course, but this particular entry, drifts into poetry and then into the usual prose and, looking at it again, I still like it. It's one of the entries that stick in my head... It's political, but also personal--"to substantially alter our place in the larger story"--and I call it, in context, "A story, a poem, a flight of fancy with a truth to tell."

However poorly executed, however inherently misogynist, The Room is also a flight of fancy with a truth to tell. Maybe it's as simple as men and women need to put some fucking effort into getting along or they will ruin each other. Maybe it's as complex as do what thou wilt shall be the whole of the law. Maybe it's just to love one another, romantically, sexually, platonically; just love one another, actually care what other people think, and the world will be a better place. 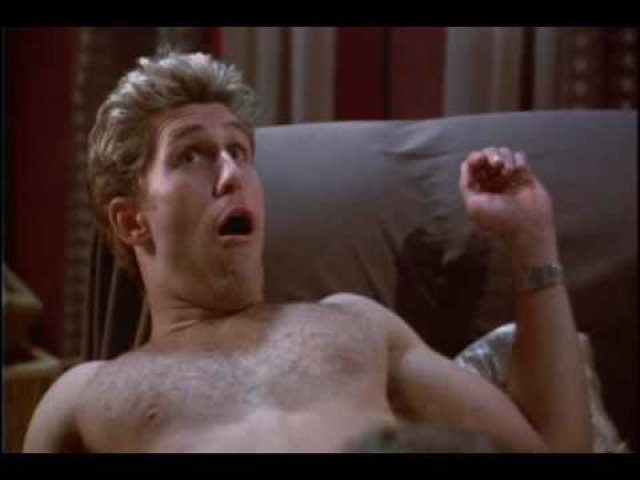 I'm coming up on the end of the third year of the Groundhog Day Project. (Though, that third year did take two.) I'm starting to think about endings and beginnings, about putting it all together, or like the title of Day 1000 - "one of those what-does-it-all-mean kind of things". I don't imagine that I will stop blogging next week. It's gotten too easy to fit this into irregular schedules with the likes of Netflix and Hulu and Amazon Prime, and quite often a very casual vibe to the writing that I can do with much less effort than some of the more formal entries that I remember (accurately or not) there being in the first year.

I want to do something interesting for Day 1096 (i.e. August 1, next Tuesday). I figure I'll watch Groundhog Day (and watch it again on the 2nd, as usual). I had thoughts about a survey of a sort, something that will take time to put together, and that I would want to allow time to get a lot of people to answer... And I don't think I've got the time in the next week.

But, if Johnny and Mark can send Chris R to jail in a matter of minutes, and Johnny can be a vampire without ever revealing the truth to anyone, even the audience, maybe something is doable.

The notes I've got we're getting a little complicated, though. Numerous potential follow-up questions about genre might've complicated things--

And, I must interrupt to get back to, you know, the move that's playing, because I guess that's a thing. I just noticed something: Mark's offscreen girlfriend that Johnny asked about is Betty, Denny's offscreen girlfriend that Johnny asks about is Elizabeth. Betty is a diminutive for Elizabeth. I think Mark and Denny might have been dating the same girl.

Also, since I've interrupted the train of thought about the movie survey, why does Mike apologize to Denny about seeing his underwear when Denny wasn't in the room? Maybe it's my history with Groundhog Day, but I'm wondering if the underwear thing happens a lot, and Mike isn't even talking about the same scene that we actually saw earlier in the film with Claudette. Or maybe I'm just making excuses for the film because it's either that or critique the shit out of it.