women change their minds all the time

Some bad movies are boring, or offensively bad. This one just works. It certainly doesn't work, you know, well. But, it's dealing with serious topics. Love, loyalty, the patriarchy, suicide. Plus, Johnny has the best take on life: "You can love someone deep inside your heart, and there is nothing wrong with it.. If a lot of people loved each other, the world would be a better place to live." I've been avoiding turning to politics this month, but if you want to solve the problems of partisan politics, you just gotta listen to Johnny...

(There's also Peter's sage advice about life, part 1: "Sometimes, life gets complicated. The unexpected can happen. When it does, you just gotta deal with it." And the more important, and far more universal part 2: "Sometimes, life can get complicated, and you've got to be responsible. So you don't see Lisa again, and you definitely don't sleep with her again." That's just good advice right there. No one should sleep with Lisa. Or Johnny. Or Mark. Or Mike. Or any of the characters in this movie, really. They're all just such awful people.)

Or have people over for a screening of The Room and have a good time ridiculing it. That could bring people closer together. 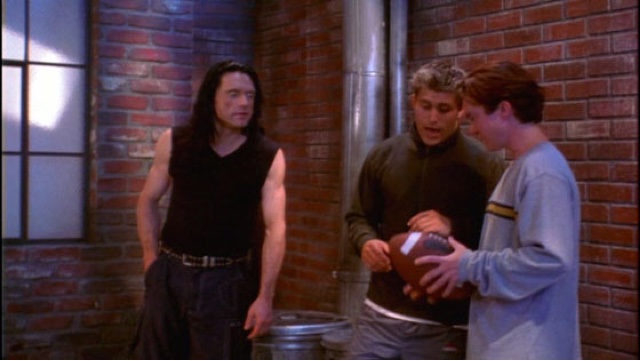 You could, for example, have a serious discussion about feminism and how men and women relate to one another. Like, for example, Mike's story about his underwear issues--if you're just watching the movie and not really putting in the effort to explore its themes in your mind, you might wonder what the point of that scene is? Why is Mike so embarrassed about his underwear that he calls it a tragedy that Claudette not only handled his underwear but showed it to everyone? Why, as the conversation progresses and Mark hears about the underwear does Mark suddenly erupt in violence, slamming the football into Mike's gut so hard that he falls over? Is it just supposed to be funny? No. This is about men and women. Mike has obvious self esteem problems. He overexaggerates his facial expressions in some pathetic attempt to amuse Michelle and keep her interested, but later he just has to announce that he has to go meet Michelle to make out with her--this after telling the underwear story to Johnny, because he needs that validation, he needs them to acknowledge his relationship because he's not a man if he doesn't have a woman. (The film's perspective, not mine.) And, his underwear being handled by an old woman like Claudette, not only old but dying from breast cancer--that challenges his masculinity and his place among these other men. Mark, of course has to act out and put Mike in his place because of this.

Then there's the conversation between Johnny and Peter and Mark about women just a few minutes later. Or another one with just Peter up on the roof a few minutes after that. And a few minutes after that, and so on. This isn't just a simple movie about infidelity, it is an exploration of why infidelity happens, and an indictment of women's role in that. Which, yeah, makes it sexist as fuck. But, hey, it's a film with a point of view, and that's important.

Or maybe it's just a film about a bunch of men with that perspective. I mean, in the end, Johnny dies, perhaps, not because Lisa and Mark betrayed him but because the norms about gender relations put upon Johnny (and us) by society set him up for ideals and expectations that are not always possible. Johnny buys Lisa dresses and flowers, but that doesn't grant him ownership of her. His expectation that their seven years together privileges him to her whenever he wants her is what backfires. Lisa's urges and Mark's urges--those are more natural, more primal. Meanwhile, Claudette keeps telling Lisa she needs to stick with Johnny for financial security, which adds a capitalist angle to the heteronormative gender relations angle. And, coming back to politics, of course the patriarchy and capitalism are going to get twisted up with each other. Both dictate that certain people are on top, others are on the bottom, certain people get to have expectations and others have to service those expectations. In the face of that, Lisa is an inspiration. And, unlike Wonder Woman she doesn't have to resort to violence to make her point. She instead turns to love... Yes, Diana also turns to love, but only after killing a bunch of people. Lisa kills no one. She spreads love, sometimes right in front of partygoers. She is not responsible for Johnny. She's through with that. She's changing. She has the right, doesn't she? People are changing all the time. She has to think about her future. What's it to you?