spread your blanket next to mine

That a lonely degenerate like Donavan can learn to care about three orphans or the woman he's convinced to marry him for the sake of said orphans, is a nice thought. That two incompetent fools like Amos and Theodore can not only find one another to spend time with but also manage to (somehow)... thrive seems like the wrong word, but they seem to be doing okay. And, that's a nice thought, too. Then there's the--dare I say it--gender-nonconforming stagecoach driver who... Actually this one is problematic. Over the course of the plot, she is manipulated (nicely) into a sham marriage and being a mother to three orphans because that degenerate Donavan would rather run off to gamble in New Orleans. She has to--according to the film, anyway--eventually wear a dress, and earn Donavan's appreciation, if not his love.

I already suggested yesterday that one detail isn't necessarily sexist--that Donavan is a bad parent figure because he's a selfish asshole and Dusty is a good parent figure because she's a caring person. But, that is sexist because those roles are written that way and played that way because of sexist stereotypes about men and women. I mean, look at Donavan and Dusty. They are both inherently independent...

Except--and I feel like I might use this word a lot tonight--Dusty is 1) introduced carrying children to their father, an easy and easily sexist metaphor for the role women play as mothers while the man is in the waiting room playing poker and smoking a cigar and not having to put any fucking effort into the birth. 2) She immediately defers to her father (the president of the Butterfly Stagecoach line, who just happens to be in this very same town) when Donovan wants to talk to someone in authority. 3) She drives for a stagecoach company called Butterfly, when her family name--again, her father founded the company--is Clydesdale. Rather than take the obvious tack of naming the company after himself, and Clydesdale being the name of a horse, which seems pretty damn appropriate for a stagecoach company, it's Butterfly, because, again, you've got feminize it. (Just like the film has to eventually feminize Dusty. Or her proper first name, which Donavan finds amusing for some reason: Magnolia.) 4) She stops by Wintle's shack (where Donavan and the kids are staying) to share some stew, ends up cleaning up the place a bit, and the kids "settl[e] right down for" her, because she has "a natural way with children." 5) She fawns over a solid brass bed (which she later thinks Donavan bought just to get her into bed (when she said he was "barking up the wrong tree" when she thought he was trying to get more from her than just being the kids' mother) in a store window the way another woman in another film might fawn over a wedding dress; it plays as innately feminine. 6) When it comes time to get married, the Sheriff offers the "trimmings--love, honor, and cherish and all that" Dusty says, "Kind of like to hear it anyway." Like she's been dreaming of getting married since she was a girl.

The movie introduces her as Dusty, the not-so-feminine stagecoach driver, then insists repeatedly that she really just needs a) a man (and some kids) in her life and b) she yearns to be feminine. It's 50s gender roles as 70s backlash to 60s feminism.

Which might not be that bad if Dusty was the only woman in the film. You know, we don't have to take a singular story about specific people to represent everyone of their type(s). But, look at the other women in this story. Celia has to pee a lot, and gets scared by the sight of a rat. That's the little girl. The adult women have no time for the kids until the kids strike gold. While Dusty clearly wants for love and motherhood (according to the film), the other women are all gold diggers (almost literally) who would (in a moment fit for the Bible) tear the little girl to pieces to get at her wealth.

(Sidenote: best exchange in the movie (with the "Celia, stop shaking it" bit a close second) is Amos saying (of stealing the gold nugget) "It's a piece of cake" and Theodore responds: "You mean it ain't gold?")

To be fair, none of the men in town (aside from the Sheriff and maybe the banker) are much good either. Amos and Theodore can't even be proper men without fucking it up.

Dusty is a good person. She doesn't even want the kids' money. But, the film can't let the sham marriage just be a sham marriage. Instead, 7) she must wear a dress and ride off with Donavan and the kids (and her father) to start a new life together.

"It shouldn't be so bad," Donavan tells her as they ride. "I'll be going into town one or two nights a week to play poker."

Because, she's now playing the role of proper woman and proper wife, she responds: "Wanna bet?" 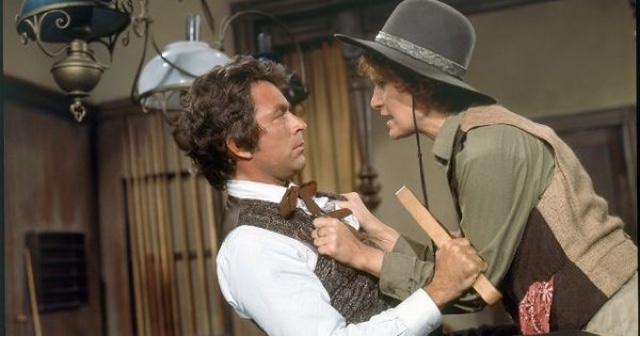