not something to be taken lightly

Kasdan: Her father may have been his mentor... That's why they know each other... So they have a previous relationship through her father.

From the transcript of a story conference between George Lucas, Steven Spielberg, and Lawrence Kasdan.

Lucas: We have to get them cemented into a very strong relationship. A bond.

Kasdan: I like it if they already had a relationship at one point. Because then you don't have to build it.

Lazy storytelling, but that's not the problem here.

Lucs: I was thinking that this old guy could have been his mentor. He could have known this little girl when she was just a kid. Had an affair with her when she was eleven.

Kasdan: And he was forty-two.

Lucas: He hasn't seen her in twelve years. Now she's twenty-two. It's a real strange relationship.

Spielberg: She had better be older than twenty-two.

Lucas: He's thirty-five, and he knew her ten years ago when he was twenty-five and she was only twelve... It would be amusing to make her slightly young at the time.

Spielberg: And promiscuous. She came onto him.

Lucas: Fifteen is right on the edge. I know, it's an outrageous idea, but it is interesting. Once she's sixteen or seventeen, it's not interesting anymore. But if she was fifteen and he was twenty-five and they actually had an affair that last time they met. And she was madly in love with him... at the time and he left her because obviously it wouldn't work out... It's not only that they like each other, it's a very bizarre thing, it puts a whole new perspective on this whole thing. It gives you lots of stuff to play off of between them. Maybe she still likes him. It's something he's rather forget about and not have come up again...

Lucas: It would be subtle. She could talk about it: "I was jail bait the last time we were together." She can flaunt it at him, but at the same time she never says, "I was fifteen years old." Even if we don't mention it, when we go to cast the part we're going to end up with a woman who's about twenty-three and a hero who's about thirty-five.

Enough of that. When the US Intelligence guys ask about Abner Ravenwood, Marion's father:

Indiana: I haven't really spoken to him for ten years. We were friends, but... had a bit of a falling out, I'm afraid.

They had a falling out when Indy slept with the guy's underage daughter. When Marcus comes to Indy's apartment, Indy speaks about Marion...

Indiana: I've got to locate Abner. I think I know where to start... Suppose she'll still be with him?

Marcus: Possibly. Marion's the least of your worries right now, believe me, Indy.

Now, from the sequence in the Raven bar:

Marion: I learned to hate you in the last ten years.

Indiana: I never meant to hurt you.

Marion: I was a child! I was in love. It was wrong and you knew it!

Indiana: You knew what you were doing.

Marion: Now I do! This is my place. Get out!

Marion: Do you know what you did to me? To my life?

Indiana: I can only say I'm sorry so many times.

Back to the transcript of the story conference:

Lucas: She's sort of made [the bar] her home. She started out maybe singing or being a call girl or whatever.

Also, this, from the streets of Cairo:

Marion: Dad had you figured out a long time ago. He said you were a bum.

Marion: The most gifted bum he ever trained. You know, he loved you like a son. Took a hell of a lot for you to alienate him.

Indiana: Not much. Just you. 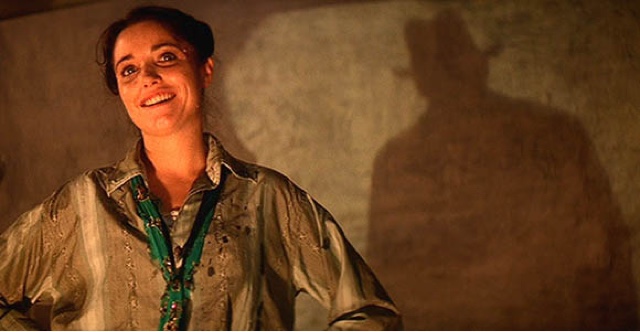 Now, Indiana Jones is not supposed to be a good person. He's our hero because the story is centered on him. (He is, of course, quite ineffectual regarding the plot, despite being the protagonist.) He is a scoundrel. He kills far more people than he needs to to get done the things he gets done. He uses people (but he pays them).

Except, that is not how this movie was received, not how Indy was received back in '81. He was the hero because we all liked him. Because we all liked this guy who does whatever it takes to get the job done. This guy who doesn't hesitate before punching and shooting Nazis, Arabs, whomever. The movie glosses over what exactly Marion meant when she said she was a child, so that detail is an inconsequential to our acceptance of Indiana as the hero as is his own ability to affect the plot.

He takes her to Cairo and their past problems get left behind. (He thinks her dead and gets sad and drunk because... reasons.) Until he leaves her bound and gagged to avoid getting caught digging for the Well of the Souls. Or until she sees him again after that and wants nothing to do with him... until there are snakes and, being the damsel in distress, she jumps right back into his arms.

Later on the boat, he's exhausted and sore and he falls asleep after some unusual foreplay. Marion says, "We never seem to get a break, do we?"

She seems to see a relationship that they don't have, and a larger world getting in the way of it. Of course, that's easily part of her damaged psyche when she's around Indy. I wonder what she and Indy tell Mutt about how they met, how they got together, when he asks. Or does Marion avoid the topic when it comes up, or pass some bullshit story that plays better? When she stands beside Indy and marries him, has she forgotten their past or is she just stuck forever in this damaged relationship simply because she's stuck in this damaged relationship?

But really, does it matter? I mean, did we even blink at the prospect of all this in 1981? Or did we just buy into the adventure and hope for the romance to go well because that's what you hope for in Hollywood?