Today is Day 1279, which means that 1278 days ago... No, that's that not true. Day 1000, I stopped this blog. I had completed (except for a few edits required by faculty later) my master's thesis about blogging and about the presentation of identity on the Internet, and I decided a few days earlier that 1000 was a nice round number and I would finish up this thing and do something else. I tried my hand at YouTube movie reviews for a bit, tried to build a review blog, and eventually made my way back here. So, really, it was 1644 days ago that I sat down to watch Groundhog Day and write about it. Every day. For a year.

And, I altered the course of my life.

Now, arguably, every little decision does that. One of the points you could take from Groundhog Day. Each little decision has repercussions. I wish the shows around them were better (so I could recommend them), because Joan of Arcadia had a science fair scene and John from Cincinnati had a parking lot barbecue scene that visualized really well the way people and events can connect and twist and affect one another. 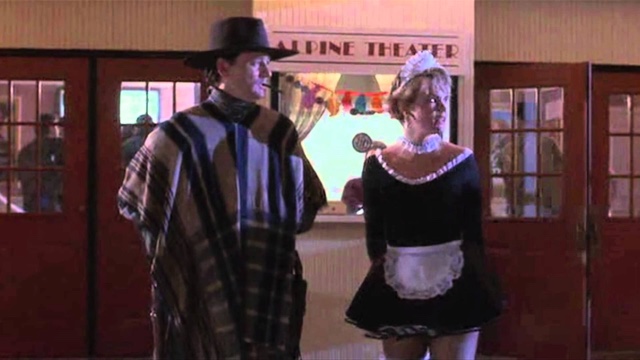 And, every movie does that, too. Which is the big theme in recent months in this blog as I return to movies I watched a lot when I was young. Not just movies that made an impact, but movies that, however big or small their impact, had repeat viewings. I come back to Roger Ebert's 1999 review of Star Wars, that line about how the film "has colonized our imaginations, and it is hard to stand back and see it simply as a motion picture, because it has so completely become part of our memories." Groundhog Day, along with these films I've been returning to these last several months, has certainly done just that--colonized my imagination. Spend as much time with anything as I have with this film, especially--somewhere over 400 times just for this blog, now, plus all the casual viewings in the intervening 20 years between the film's release in February 1993 and Day 1 of this blog, 2 August 2013--and it leaves a mark. It changes your brain chemistry. It alters the way you look at the world. I've still got one of my WWPCD bracelets, though I don't wear it much because apparently my wrists don't much like the material, but the bracelet doesn't matter when the message is ingrained inside my head already.

In his original review of Star Wars, Roger talks about "an out-of-body experience" in which his "imagination has forgotten it is actually present in a movie theater and thinks it's up there on the screen. In a curious sense, the events in the movie seem real, and I seem to be a part of them." The way I figure it, if you can't suspend your disbelief at least a little bit when you're watching a movie, you might as well not even be there, you should probably find something else to occupy your spare time. If you can be there, on the screen, in the screen with the characters, or be those characters, then you know how great it can be sometimes, how horribly fun and tragically painful, how transcendent, how devastating. Today, for example, I'm in the middle of my last week of winter break, spring semester starts next week, and I started feeling sick last night before bed and woke up feeling worse. So, I sat around on the couch most of the day, covered in a blanket, catching up on some tv and then watching a couple movies (other than Groundhog Day, I mean, which has just gotten to the first resumption of Phil's Groundhog Day as I write). I watched again Get Out, and enjoyed some of its setup that I wouldn't have thoroughly understood the first time, on the big screen little less than eleven months ago, and was taken in by the performances, and the bizarre behaviors that tip off Chris (Daniel Kaluuya) to the strange shit going on around him. And, I could be there, feel the horror, the confusion. Then, I watched Terror in Beverly Hills, ostensibly an action movie from the 80s, but very light on action, and quite boring through most of its runtime. But, even that film had one exchange, between Frank Stallone's Hack Stone and Cameron Mitchell's Captain Stills in which they felt like maybe they were real people and not shallow caricatures written and directed by, well, honestly foreigners who weren't good with the English language, and who were trying to make an action film without understanding the fundamentals that make such a thing work for an audience. Still, it had its moment.

Not punctum, but a moment in which I could get into even this poorly constructed, poorly directed, poorly acted film. When the film is done well, it's even easier.

Nonetheless, I do not subscribe to the idea that a film has to be good to be enjoyable, nor does a film being bad mean that it is not enjoyable. I don't have to like it to appreciate that a film is well-made, nor does my liking a film mean I automatically assume it is great. Two of my favorite films last year, for example, were Brigsby Bear and Dave Made a Maze. Each enjoyable, each with nice messages, each with moments of greatness. And, I put them on my top ten list for the year. But, are they great films? No, I suppose not. But, they grabbed my imagination and pulled me into the screen and showed me pieces of myself laid bare, they offered me moments of joy and moments of sadness. In his review of The Longest Yard, Roger has to justify giving a forgettable film a thumbs up three weeks after the fact. Three weeks he spent at Cannes, watching films that were great, films that strived for greatness, films that reached it. "I do not say that I was wrong about the film," he writes. "I said what I sincerely believed at the time. I believed it as one might believe in a good cup of coffee." He writes about "a generic approach to film criticism, in which the starting point for a review is the question of what a movie sets out to achieve." He writes:

"The Longest Yard" more or less achieves what most of the people attending it will expect. Most of its audience will be satisfied enough when they leave the theater, although few will feel compelled to rent it on video to share with their friends. So, yes, it's a fair example of what it is.

I would however be filled with remorse if I did not urge you to consider the underlying melancholy of this review and seek out a movie you could have an interesting conversation about. I have just come from 12 days at Cannes during which several times a day I was reminded that movies can enrich our lives, instead of just helping us get through them.

One of the reasons I come back to Roger so often when I might not find the right words myself to talk about a film is that he understands that film is neither purely art or purely entertainment but something entirely, fundamentally, itself. And he loves it. Even when he hates it. Groundhog Day has enriched my life. Brigsby Bear enriched my life. Dave Made a Maze enriched my life. So many of the film's I've been writing about in recent months in this blog--and, note, I would not contend that all of them have--have enriched my life. Sometimes, a film just helping me through life is enough, though. When it's more--that is... I'm not sure one word would sell it.