god, i’d hate to be pillaged

Something I didn't know: a Broadway revival of The Pirates of Penzance had apparently done quite well in 1981. Universal pushed for a film version, but it wouldn't come out until 1983. In the meantime, Fox pushed out the send-up The Pirate Movie, beating the straight adaptation to the big screen.

But, I really didn't want to talk about the pillaging of the theater but rather the pillaging of women, the patriarchy, and all the usual stuff I might talk about. The "noble custom" that dictates that the eldest daughter marry first, the youngest marry last, with nary a question of whether or not any of them want to marry. But, even on the other side, Frederic asks of Ruth (apparently before he's met other women, even though I'm sure he and his shipmates have raped and pillaged and plundered plenty) if she's beautiful. Almost immediately after meeting Mabel, he declares that he loves her and may want to marry her, because that is what he thinks non-pirates do. And, that is what the film ultimately reifies with the "Happy Ending" pair-ups and the real-world present wedding afterward. Classic (romantic) comedy ending--pick at the trappings of tradition and then embrace them in the end anyway.

The sisters serve only to be wives (and briefly fighters, but really, the cops do most of the fighting for their side). They are introduced in the real world walking in formation in bikinis, introduced in the period-piece dream deliberately in contrast to Mabel's skimpier dress, but by the end of the film, they have stripped down to outfits similar to hers (and she has actually added clothes, though not much). 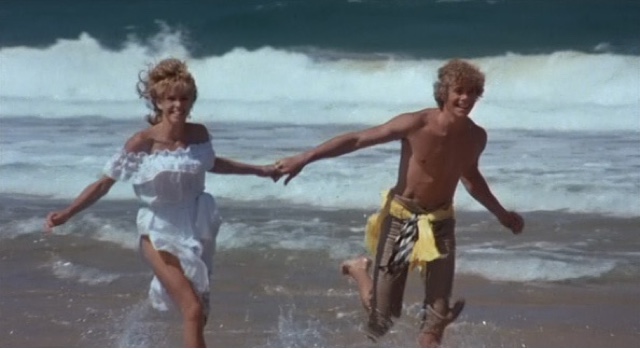 The film actually plays at Mabel being a feminist along the way. Her skimpier outfit is her choice, bucking tradition. She takes charge when Frederic cannot. But, ultimately, her entire plot is in service of her marrying the hot young pirate she just met, and her idea of a happy ending is all her sisters marrying the pirates or police so that even her getting married is not bucking the traditional order for the sisters but upholding it.

Meanwhile, the film also plays with some gay stereotypes with the pirates and Mabel even asks Frederic at one point if he's gay because he "and the Pirate King get around in those rather feminine, pleated shirts and all that leather." Frederic is offended. "I'm not prejudiced," she replies. "I mean, what does this country have a navy for?" When Mabel is pairing everyone up for the happy ending, she runs out of sisters and matches up two men. It could be a progressive moment in a different film, it's even oddly cute, but it is clearly meant for a laugh. she tells Frederic "You can't live your life by the outmoded conventions of a neo-imperialist society" and she insists, "I won't be choked and strangled by someone else' stumbled ideas of custom and duty" but as much as she claims to be doing otherwise, everything she does directs her right into the traditions she's avoiding.

But, I wonder... I'm watching this as a kid, do I get the message she's proclaiming louder than the message she's acting out? Is there a difference between them, or does one just make the other more palatable. I think back to a passage from Grant Morrison's The Invisibles that I've quoted in this blog before:

The most pernicious image is the anarchist hero figure. A creation of commodity culture, he allows us to buy into an inauthentic simulation of revolutionary praxis...

The hero encourages passive spectating and revolt becomes another product to be consumed.

That is, it's perfectly fine for Mabel to step outside traditional gender stereotypes as long as those steps lead her right back in the end. Basically, the message of The Pirate Movie regarding gender, is it's okay for a man to be a afraid and weak and maybe effeminate as long as he's really manly underneath and everything can still end with a big fight scene. And, it is okay if a woman stands up to tradition and takes on the leading role in defending her home as long as she's really just doing it for love and the chance to get married ASAP.

That being said, the movie is still entertaining because this is the structure we're used to. This is the traditional comedy route. Not just with romance, either. The recent Bad Moms films, for example, are all about mothers bucking their traditional motherly roles only to fit snugly into them by the end of the film somehow because of their transgressions. And, not just for women. Phil Connors must get worse before he can get better.

This is just how comedy works. Show the world, blow up the world, rebuild it exactly the same as it was before (but pretend it has changed). Laugh, rinse, repeat.