Yesterday, I watched Groundhog Day yet again, but I really didn't say much about the movie itself. To be fair, there isn't much to be said about Groundhog Day that I have not already said in one form or another. Still, it's the 25th anniversary of the film's release coming up, so I feel that I should say something.

If you want a good story about me and this blog and the movie, and about the town of Woodstock, where they filmed most of the movie--and where every year around this time, they celebrate with their own Groundhog Days--check Michael Schulman's piece at The Believer, check my specific response to that piece and a personal message I got from screenwriter Danny Rubin, or just start reading with Day 1 and go from there. If you want to understand the holiday, check here or here.

This week, The Federalist called the film, "a seemingly light and whimsical" comedy that "has had an interesting life." Author Robert Tracinski goes on to describe fairly well what the movie is about, why it has lasted--read the piece if you like; Tracinski has a great line (from a friend) about Phil's "long-range planning in a single day." I actually don't want to grab a bunch of quotes today and use them as I sometimes might. Even in grad school, I would us outside quotations more than anybody else... Arguably, I do the same thing in this blog by using movies to say the various things I mean to say day in and day out.

I'm still sick, and I'm sitting in pajamas, which I rarely wear, and wrapped in a blanket, and enjoying the comfort of something familiar. Reciting the dialogue along with the characters is second-nature to me now. (Even my daughter, who just got home from school as I was starting the film today, can recite every line, though she pretends to hate the film's permanent place in her head.) 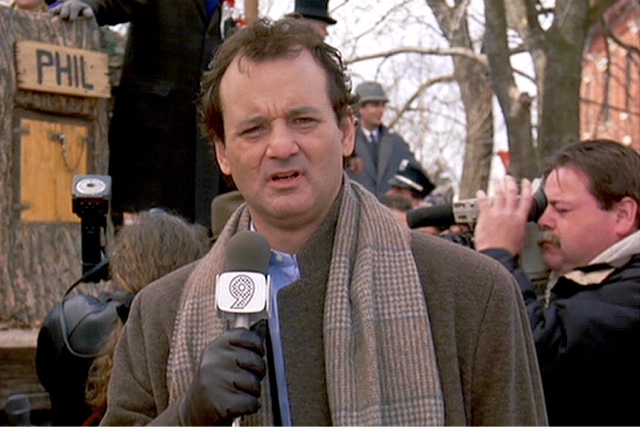 You, reading this, might be new to the blog. I tend to get an uptick in readers around the holiday, so I try to offer at least a hello. So, hello. If you somehow heard about me in the crowd in Punxsutawney or the crowd in Woodstock this Groundhog Day, a very special welcome, and I wish I was there. Welcome to my strange little corner of the Internet. What I do here is write about movies, and write about life. And mostly, I use the former to write about the latter. I do not generally review films here. I take them in, I embrace them, I explore and exploit them, I criticize them, I pick them apart and sometimes hold them up as glorious things to behold and believe in.

If you're dying to read something about Groundhog Day, you could go back to the first year of this blog. Maybe start with Day 365 and work backward, or if you want the details explained so you can pick and choose easier, start with the Day 363 recap. I've written about religion, about philosophy, about filmmaking, scriptwriting--seriously, I have picked apart multiple drafts of the screenplay for Groundhog Day on separate multi-day occasions--about poetry, about mental illness, time loops, about love, about self-esteem and personal identity. It feels like anything and everything has gotten wrapped into this package called The Groundhog Day Project. And that I because of the film at the heart of it all. Even when I'm watching a different film--which now is more often than not as this blog is half way through a fourth year--the implicit sense of repetition (mostly, for the current phase of the blog, I am watching each of the films for three days) comes from the spirit of Groundhog Day. That repetition is inherent in life, that finding the individual moments that we can change within that repeating framework is what makes life interesting. And, that sometimes we must embrace the repetition because that makes life worth living. Nietzsche's eternal recurrence and all that. Live a life worth repeating and the shit that repeats because of your day job or what have you won't matter so much. It's the variations that matter, not the resumptions. You work a boring office job, enjoy the watercooler conversations, for example. They are the flavor that makes the mundane profound... or at least temporarily entertaining.

Don't get mired down in the muck that makes you miserable. And, I'm sorry for the alliteration there. It was not intentional. But, maybe it will help you remember. Don't get mired in the muck that makes you miserable. Instead, find the little things that lift you above it and latch onto those things. Make good friends, have great relationships, find a few hobbies that can pull you away from the real world from time to time. And, the sobering reality that is your life won't matter so much. Let the crap repeat, let it bore you, and bore into you. And, then rise above it, and enjoy.