save the whales but not the universe, huh?

So, I was listening to the soundtrack to the stage musical version of The Last Starfighter today. I only even learned of its existence today, actually. And, it starts off a little goofy, I'm not particularly liking it--production notes online about how they use the trailer park and a picnic table in particular for the trailer park denizens to act out the story, without much else actually seemed like it could be fairly cute, but the music felt immediately wrong in tone for a film that starts so casually, with the sleeping dog and the cat in the mailbox, awnings raising, Otis (Vernon Washington) scraping foot off a plate. Maybe it would be different on stage... I assume it would be different on stage. But, the songs alone don't quite get that same sense that this is a small-knit group of folks who all know each other and are used to passing messages from person to person all the time like they do early in the film when Elvira's (Peggy Pope) power is out and she's gonna miss her soaps.

An annoying detail as well, the musical mentions the zandozan being in the video game, but the game is clearly all about gunstar fighting, and the zandozan has nothing to do with that. Not that I've seen the movie many, many times... Except that is exactly why I'm writing about in this blog today. The Last Starfighter is my last film in this childhood deconstruction for 1984.

But, the thing that I wanted to write about today is actually an improvement, in my opinion, on the film version that arises at the climax of the musical. See, movie Alex (Lance Guest) is basically the handyman of the trailer park, and obviously he's good at playing that videogame, but aside from that there is no real indication that he should be escaping the trailer park. He wants to, but what is he doing about it? Early in the film, right after that on-the-nose shot of the weather vane, we see Alex in his room, and a gust of wind sets his planets mobile in motion and he stares at it, and we can imagine he's dreaming of flying away from the trailer park, maybe flying into space, dreaming of doing all the stuff he's going to actually get to do later. But, what does he do to earn it?

He plays a video game. 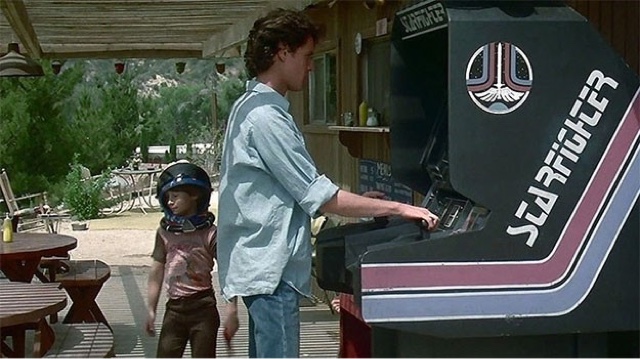 Every videogame-playing kid's dream--that sitting there playing is going to mean something.

(That scene in which he breaks the record on the game is a great one. The excitement among the trailer park folks is palpable, and it feels real. You really get a sense that this group all care about one another.)

But, even after Alex has that call to adventure in Centauri (Robert Preston) arriving, he rejects it. (Almost twice.) As the hero often does--just check your Joseph Campbell. But then, he only returns because 1) he's in danger and 2) the rest of the starfighters are dead.

Alex gets rejected for his loan. For... some university, I guess. He's got a Save the Whales sticker, and the Beta Unit comments on it later, but otherwise, we aren't told what Alex wants to do. Just that he wants to do... something. His mother says he can still go to city college and he has himself a little tantrum. This is our hero. He happens into an adventure (though Centauri, in passing, suggests it was fate because that particular Starfighter game was supposed to be in Vegas), but his actual skill set--the handyman stuff--has nothing to do with any of it. Even when he decides to hide in a cave, that is a deus ex machina kind of detail that comes out of nowhere; the film has not previously established the hide and seek with his brother. It has established Alex's ability to fix things.

The musical, though--it does a better job. In the film, the death blossom is the big weapon, the thing that wins the final battle. At first, I thought it was cheap that the musical made the death blossom be not quite enough. Like the adaptation had to one-up the original. But then, I thought of what the death blossom was--a deus ex machina to win the unwinnable. In the musical, they have another weapon, the Target Z, and it will surely win the battle except for one thing--it has been damaged in the prior fighting. So, to win the final battle, Alex doesn't just get lucky that his gunstar has some special attack mode. He has to repair an alien weapon console on the fly. He has to actually use the skills that he has been shown to have, in order to be victorious. (In the film, Grig rewires something, sort of.) The video game leads to the gunstar, sure, but the film's final victory is not based on Alex's skill. The musical's final victory is.

Also, Alex's change to deciding to be a Starfighter, even after that conversation with Grig about their families, is cheesy 80s sudden. In the musical, he responds to the offer to go home again with an immediate sense that his family would be in danger.