Some notes before we continue with Adventures in Babysitting:

According to Jan Harold Brunvand (1981), the classic maniac with a hook for a hand story "seem to have emerged in the last 1950s." But, a lot of people probably learned it, he says, from when the following version appeared in Dear Abby, 8 November 1960:


DEAR ABBY: If you are interested in teenagers, you will print this story. I don't know whether it's true or not, but it doesn't matter because it served its purpose for me:

A fellow and his date pulled into their favorite "lovers' lane" to listen to the radio and do a little necking. The us it was interrupted by an announcer who said there was an escaped convict in the area who had served time for rape and robbery. He was described as having a hook instead of a right hand. The couple became frightened and drove away. When the book took his girl home, he went around to open the car door for her. Then he saw--a hoo on the door handle! I don't think I will ever park to make out as long as I live. I hope this does the same for other kids.

Or maybe you heard it for the first time in Meatballs. Brunvand says, "Teenagers all over the country knew about 'The Hook' by 1959, and like other modern legends the basic plot was elaborated with details and became highly localized.


"The Babysitter and the Man Upstairs"

An appropriate story to reference in this film in which a young woman (and her charges) face danger after getting stranded in the city, Brunvand offers this "standard version... from a fourteen-year-old Canadian boy (1973):


There was a baby-sitter that was in Montreal babysitting for three children in a big house. She was watching TV when suddenly the phone rang. The children were all in bed. She picked up the phone and heard this guy on the other end laughing hysterically. She asked him what it was that he wanted, but he wouldn't answer and then hung up. She worried about it for a while, but then thought nothing more of it and went back to watching the movie.

Everything was fine until about fifteen minutes later when the phone rang again. She picked it up and heard the same voice laughing hysterically at her, and then hung up. At this point she became really worried and phoned the operator tell her what had been happening. The operator told her to calm down and that if he called again to try and keep him on the line as long as possible and she would try to trace the call.

Again about fifteen minutes later the guy called back and laughed hysterically at her. She asked him why he was doing this, but he just kept laughing at her. He hung up and about five seconds later the operator called. She told the girl to get out of the house at once because the person who was calling was calling from the upstairs extension. She slammed down the phone and just as she was turning to leave she saw the man coming down the tapirs laughing hysterically with a bloody butcher knife in his hand and meaning to kill her. She ran out onto the street but he didn't follow. She called the police and they came and caught the man, and discovered that he had murdered all the children.

"The storyteller added that he had heard the story from a friend whose brother's girlfriend was the baby-sitter involved," of course. If you're reading this blog, you're probably more familiar with this story from its most popular film version, When a Stranger Calls (which you can read a bit about in this blog entry). "Have you checked the children?" And all that.

Both stories put unexpected danger into fairly normal, domestic situations. And, the use of the phone--and I loved this bit so much I think I wrote about in one of my Halloween entries in this blog and referenced it on my podcast Michael Myers Minute--folklorist Sue Samuelson argues:


...the telephone is the most important and emotionally-loaded item in the plot: the assailant is harassing his victim through the device that is her own favorite means of communication. Baby-sitting, Samuelson points out, is an important socializing experience for young women, allowing them to practice future roles, imposed on them in a male-dominated society, as homemakers and mothers. Significantly, the threatening male figure is upstairs--on top of an in control of the girl--as men have traditionally been in the sexual relationship. (Paraphrased by Brunvand, 1981)

Similarly, "The Hook" suggests an inherent danger in premarital sexual activity and works as a warning to stay in line with societal norms regarding as much. As Brunvand (1999) says,


Folklorists are divided about whether "The Hook" represents simply a warning story about staying out late in an unknown environment, or whether its details may signify sexual meanings, including symbolic castration of the threading and deformed phallic symbol--the hook--outside the car at the same time that the boyfriend is trying to "get his hooks into the girl" inside the car.

Essentially, don't park. Don't spend your time on the phone when you're babysitting. Don't drive your babysitting charges into the big city when you don't have a spare tire handy.

And, inasmuch as Adventures in Babysitting might ultimately reify some of its problematic presumptions, that it earlier defied, it operates under the same guise as urban legends. The story is a warning, but can also reveal truth. But more on that tomorrow. First: 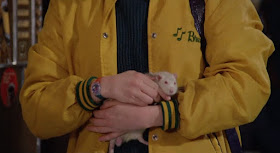 
A woman from La Mesa, California, went to Tijuana, Mexico, to do some shopping. As any visitor to this border town knows, the streets near the shopping areas are populated with stray dogs. The woman took pity on one little stray and offered it a few bites of her lunch, after which it followed her around for the rest of the afternoon.

When it came time to return home, the woman had become so attached to her little friend that she couldn't bear to leave him behind. Knowing that it was illegal to bring a dog across the international border, she hid him among some packages on the seat of her car and managed to pass through the border checkpoint without incident. After arriving home, she gave the dog a bath, brushed his fur, then retired for the night with her newfound pet curled up at the foot of her bed.

When she awoke the next morning, the woman noticed that there was an oozing mucus around the dog's eyes, and a slight foaming at the mouth. Afraid that the dog might be sic, she rushed him to a nearby veterinarian and returned home to away word on her pet's condition.

The call soon came, "I have just one question," said the vet. "Where did you get this dog?"

The woman didn't want to get into trouble, so she told the vet that she had found the dog running loose in the street near her home in La Mesa.
But the vet didn't buy it. "You did not find this dog in La Mesa. Where did you get this dog?"

The woman nervously admitted having brought the dog across the border from Tijuana. "But tell me, doctor," she said. "What's wrong with my dog?"

His reply was brief and to the point: "First of all, it's not a dog--it's a Mexican sewer rat. And second, it's dying."

Don't even need to get into Brunvand's explanations to realize there's some sort of cultural/racial confusion going on in this story. Cultural appropriation perhaps. But, whatever it is, Brenda's problem in Adventures in Babysitting is not cultural, but specifically, explicitly visual--her glasses have been stolen and she just cannot see clearly. Of course, that works as a pretty good metaphor, too. White girl can't see what happens in the inner city bus station.