and nothing that you did mattered

Davies (1995) tells us that Groundhog Day "ignor[es] considerations of race and gender politics" (p. 215). But, in no uncertain terms, Davies is wrong. Well, somewhat wrong. Well, actually mostly right on the side of race. Gender is a different story. Take a "rom com" of any era and it will tell you something about gender politics at the time it was made. It's harder for the film to have anything to say about race when there are only two people in the cast who are not white and have lines. I argued in a media studies class once that Phil is effectively put in the position of the disenfranchised (as evidenced in his conversation with Ralph and Gus at the bowling alley bar) in that the regular rules of so-called civilized society do not apply to him anymore. Money has no value. His work has no value (though he does continue to work at least most days because Rubin wanted that check-in to sprinkle through the original script). Because this is a mainstream comedy from 1993, his white privilege may have value but no one is going to comment on it.

Take a break from me and go watch "Groundhog Day for a Black Man" on YouTube. 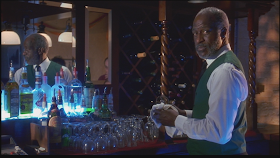 Then imagine this film in 2020, and I don't mean the Super Bowl commercial, I mean this story about an asshole white reporter on assignment who treats everyone like lessers and nobodies. But, he's gonna get his comeuppance, learn to care for women and children and, the horror, people who are not white, who are not like him, who don't have the comfort of making mistakes and then getting a do over.

And, my brain drifts into Bulworth territory, because that's a nice positive film on race relations... And I mean that (mostly) sarcastically. I mean, I rather like that film, but it's bordering on Soul Man in its tone-deafness about race and how to approach the subject of race relations.


The movies, the tabloids, TV and magazines,
They tell us what to think and do and all our hopes and dreams.
All this information makes America fat,
But if the company's out of the country, how American is that?
But, we got Americans with families can't even buy a meal.
Ask a brother who's been downsized if he's gettin' any deal.
Or a white boy bustin' ass till they put him in his grave.
He ain't gotta be a black boy to be livin' like a slave.
Rich people have always stayed on top, by dividing white people from colored people.
But white people got more in common with colored people than they do with rich people.
We just gotta eliminate 'em.


A bartender and a nurse, by the way--
the two black characters with lines.

There are a few other recurring extras who are not white,
But really, hardly anyone has lines in a movie like this.
Take it as the metaphor I was implying above:
White guy's privilege means he can screw up and he gets another chance.
Black guy
(or, taking the Bulworth line and setting ourselves up a nice Venn diagram, poor guy)
Messes up, the world... America anyway, takes advantage,
Stomps him down or pushes him back, and if he comes again, it's comical,
If he comes a third time,
Or comes by force,
Call in the National Guard if the cops didn't kill him first.

If you're reading this entry sometime in the future,
Check the date, check your history.
We've got a horrible pandemic raging across the country
And it disproportionately affects people of color and people without means,
And we also have COVID-19,
And if you don't get what the first one is, I'll spell it out for you because I'm feeling nice.
It's racism.
It's a country that built itself on the back of slaves
And then just never quite adjusted to those slaves not still being slaves,
Not being acquiescent and obedient, submissive and silent.

We're set in our ways as nation,
And we are just so fucking confident about all of it.
I mean, we were born as a bunch of religious folk
Who were fine with God telling them what to do but not European royals
So they ventured off to a New World,
Gradually killed off as many of the natives as they could,
Proclaimed the place their own,
And decided that this new country was the end all, be all of countries,
And the world was complete now that we were here.

America is like some inadequate adolescent or sad 20-something who thinks he's
(and I use the masculine pronoun here deliberately)
All that and with Great Britain backing us,
It's like Mommy England has been telling us
Every since we had that big fight and ran away from home
That we're really the greatest little country that ever lived,
And don't let anybody tell us differently,
Even our own inner voices
When we see the horrible shit that we get up to in backwater third world countries,
And domestic streets right here in our own cities,
Because might makes right and white has might
And everyone else need not apply.

Insurrection Act v Posse Comitatus Act
But the Supreme Court is stacked against our better angels
And the decision is coming down,
The jackboot is coming down,
The hammer is coming down,
And I feel like Danny Glover in Leathal Weapon:
"I'm too old for this shit"
When anyone who knows my writing history
Would know I side with destruction, uprising,
And violence is always an option,
Or so the history books would tell us,
Except when the Powers That Be can keep tweeting
Faster than the black man can take a beating
Faster than we can sit back eating
Postmates and watching the news,
Posting memes in between black squares of solidarity.

Just a bunch of armchair quarterbacks
Watching a nation self-destruct,
But there are plenty of commercials about pills we can take
For the impotence we feel when others die,
Others cry,
And smoke is in the air,
But, we're safe at home,
Because tomorrow is Groundhog Day,
We're white,
We get to do it again,
Just keep going,
Because failure is for animals and thugs,
Leeches and bugs.

The sun sets on another day of marching,
Nothing looks to be changing,
Though everyone's watching.
Same shit, different day,
Stomp down those who rise,
And, bring on more pepper spray.
robert e g black at 8:09 PM
Share