some kind of funny boy

Campus Man is rather immediately an 80s film. Guitar riff, camera comes down on a college campus. Titles are in a far too colorful font. Then there's a couple really brief bits with our lead and his business teacher because something something business business entrepreneur. But nevermind all that--

Titles continue over diving footage. A bit male gaze-y on the closeups except for one obvious thing: the bodies being ogled are male.

Not to distract from somehow our lead--I should figure out his name--Todd is supposedly advanced with business but he's also bad with money? On the one hand, that is stupid. On the other hand, that does feel very late 80s. He is the purveyor of calendars of campus women, but is in money trouble because "the scholarships didn't work and... the loan is a problem" which is vague bullshit terms for he needs to make money fast, get on with the plot.

The plot triggers when Todd's girlfriend compares diving to dancing and Todd just discovered that men are also attractive. (But he is hesitant at the bank when he mentions that men might buy his male calendar.)

This is Matt Dorff's first produced feature script (two others also get shared credit), and now I'm feeling like an asshole because I'm wondering if this is some gay fantasy posing as an 80s business fantasy.

Meeting in secret in a cemetery in the desert with a hypermasculine guy in a trench coat and cowboy boots is surely a fantasy for both men and women in the audience.

Casual nudity in the school showers in the 80s--perfectly normal. But, it's the men's locker room. This movie is trying for (and, as I remember it, kinda achieving) novelty, but within the film it is claiming far more novelty than I think a calendar with men in it would be in 1987. But, that isn't the point. What is novel is a movie aiming for the same demographic as so many 80s movies focusing on the objectification of the male form. 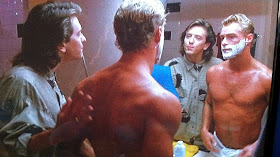 Speaking of which. While searching google for an image to include in the blog today, I noticed that all the images for this movie are one of three things: the poster, of course; behind-the-scenes black-and-white shots; or GIFs of, well, the diver, Brett on the diving board or pulling up his speedo in the dressing room, or another model (a swimmer, I suppose) being splashed with water). Very visually fixated.

Contemporary reviews of the film are hard to find online as well. Walter Goodman's review from The New York Times, has a pretty basic description of the film:

The look and sound of "Campus Man" ...marks it as a production done on the cheap, which is appropriate to this little anecdote about a business major at Arizona State who produces a jock calendar featuring his best friend, a champion diver, and so jeopardizes the friend's amateur standing.

Yep, that, plus a loan shark (the aforementioned trench-coated, cowboy-booted Cactus Jack) is all the important plot to the film.

But then I get distracted because the characters go to Steve's Ice Cream, which look s a lot like Cold Stone Creamery, and I'm looking up the history of cold Stone and learn that sure enough, it was founded in 1988 in Tempe, Arizona (this movie was filmed in Tempe in 1986, released April 1987), and the wiki entry for Cold Stone says outright, "The company has maintained the same concept created by Steve Herrell who founded Steve's Ice Cream."

Actually, if Cactus Jack would grow out the facial hair just a little, I think he'd be as hot as I remember my sisters thinking he was in '87. (Instead, he shaves it off for the climax of the film.) And, Brett is a little too clean cut.

Throw in a convoluted climax that feels like a bigger production than Todd's calendar ever was, and 80s 80s 80s, everything turns out just fine, cue another diving montage.
robert e g black at 8:29 PM
Share