In 2000, Fievel Mousekewitz was named an official icon for UNICEF for "promoting worldwide understanding and friendship among children." However much Roger might have dismissed the movie for being too depressing—


he wrote, among other complaints, "The movie has such vague ethnic grounds... that only a few children will understand or care that the Mousekewitzes are Jewish. And few of those are likely to be entertained by such a tragic, gloomy story.

—the film not only performed well—it was #2 behind Crocodile Dundee its opening weekend and #18 at the box office for all of 1986 (and it didn't come out until November)—but has also endured. A few sequels, a couple video games, a comic book, and some nice retrospective articles years after release.

Regarding the latter, for example, Dave Trumbore, who credits An American Tail as the first film he saw in a theater, writes for Collider, 21 November 2016:


What I once regarded as a darkly serious and sometimes silly tale about a young mouse separated from his family on the streets of New York City has matured into a harrowing allegory for our world's enduring evils: racism, the vilification of "the other", and the breaking of the Golden Rule.

I had to wonder yesterday if the cats were the Americans and the mice were the immigrants. Originally, there were not supposed to be any humans in the film at all, but we do see humans, but in the background—the cat and mouse story more like that of an underground society. So, while the mice do seem more distinctly (but not explicitly) varied in their origins—one on the ship to America wears a kilt and Balmoral cap, for example—the cats seem deliberately more monolithic (except for Tiger, of course). But, I think the story plays more interestingly if we look at the humans as the "Americans" and the cats and mice are just different groups of immigrants. And, they have to, as I said yesterday, compete with each other for resources because they don't have the clout to get above scraps. Or they would be human, I guess, to belabor the metaphors a bit. 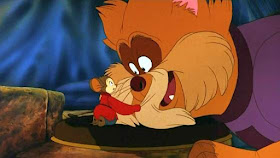 If we look at them as explicitly different cultural, ethnic, or racial groups, the finale of the cats versus mouse storyline is a little problematic. The Mousekewitzes flee Russia because of an anti-Semitic pogrom (though the film does not explain this—hence Roger's "vague ethnic grounds" referenced above) but the Giant Mouse of Minsk plan is to shove all of the cats off the dock onto a ship bound for Hong Kong? What if that plan doesn't work? Is the next venture more violent? How does the metaphor extend beyond the presented story?

In passing I should note that the suitcase in which Warren T. lives has a hat sitting on top of it that looks like a human-sized version of Fievel's own Kasket cap. A specific implication about the possibilities if Fievel doesn't find his way back to his family perhaps. If he rejects them when he does later, and they do not happen along when they do, does Fievel join up with a gang, maybe a specifically Russian one, Russian and Jewish even. Does Fievel become an actual mouse version of Warren T.'s local crime boss? Not an unheard of possibility for an immigrant who finds normal life difficult upon arriving in America.


[Director Don] Bluth contends that creating an overly romanticized version of the world is a disservice to viewers. "Now shall we manicure this and make it look like everything's wonderful in America... And people are all good to each other? That's certainly not real," he says. Bluth paraphrases a quote he remembers by actress Lillian Gish: "A movie is not an innocent thing... All you directors out there, you're changing the way people think. Be very careful that you tell the truth."

I couldn't find the original Gish line Bluth is paraphrasing, but I understand the sentiment certainly. I mean, I've said all along in this blog that every movie tells you something about the time and place it was made, it tells you about the politics, the gender relations, the values, the haves and have nots, the ins and outs, the ups and downs. Even if it doesn't try to. Even if it doesn't want to. A movie can generally give you a pretty good idea of what its writer(s) or director is trying to say. Take note for instance of where Fievel lands first arriving in America. He lands on Liberty Island, where he meets Henri, an immigrant or maybe just a visitor, but definitely not a native. Henri is quite comfortable in his own skin, and he has a vaguely optimistic philosophy about life which he explains in "Never Say Never". Henri is working on the Statue of Liberty, and just before Fievel's bottle washes up, we hear a chorus singing the familiar final lines to Emma Lazarus' "The New Colossus":


Give me your tired, your poor,

The wretched refuse of your teeming shore.

Send these, the homeless, tempest-toast to me,

I lift my lamp beside the golden door!

And later, when Gussie Mausheimer is rallying the mouse crowd...


Money is not everything. I know, because I have money and I have everything, but what are they worth without freedom? Why did we come to America? For freedom! Why are they building that statue? What does it stand for? Freedom! So, what do we want? Freedom.

But then it gets a little problematic.


Freedom from cats. And because this is America, we can do something about them!

Problematic because by turning to violence against the cats, I think the mice kinda missed the point of "A Duo". Though I guess, technically, they didn't hear it. But, we did. And, no, a movie is not innocent. It presents its ideas in (if done well) a digestible form so we take it in, make it a part of ourselves, and become someone new by the time the credits roll. It doesn't have to be a big change, but a good film will offer some change. And, each time you think on it, think on its messages, you might become a little more of what it wanted you to be, or perhaps you might be more reactionary and turn away from it, but still, the film has fueled that change.

In the past "year" of blog entries, I have explored movies that were fixtures of my childhood. Movies that, in large ways and small, good ways and bad, helped build me into the me I was later. I've got just one movie left in that deconstruction after An American Tail, and I think I've demonstrated that not only did these movies affect me when I was young, but coming back to them, even to ones I barely remember after years of separation, the me that I am today has to measure and re-measure itself, and every movie is still not innocent, but a potentially powerful influence. And an immigrant tale like this one—if you saw this when you were young and you enjoyed it, and years later you demonize immigrants and even underprivileged natives, you, my friends, are doing it wrong. And, you should back up and give your life some measure as well...

We can hope you come out better on a second pass.
robert e g black at 7:10 PM
Share