i don’t know, i’ll make something up

It's strange how some movies can be entirely familiar after decades, and some that were familiar once have slinked away out of my head. A few movies ago, I realized that somehow I had conflated Big Business and Outrageous Fortune as one big movie involving, I guess, two pairs of mismatched twins who also share a man and get involved with some sort of organized crime (I still can't quite recall what happens later in this film) and end up in the Mexican desert. 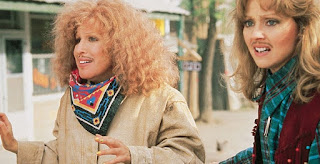 Instead there's a genius acting instructor--Stanislav Korzenowski--and just two women (only one of them played by Bette Midler) who both audition for his workshop. And, I'm reminded of when I went to a Meisner workshop a couple years ago with my friend Christi from D&D, and it was fun but I had issues. For one, how the teacher described the way one plays as a child, becoming the thing you are playing at being, was exactly what I meant when I used the word "pretend" which was a semantic argument he had no time for and I was too distracted for, no matter how much I might like debate, because some of the exercises bugged me in nit picky ways beyond that.

Like we had to close our eyes and describe what we heard and they had someone walk out of the back room, right past us, out the front door, leaving it open so we could hear the flow of traffic going by. But, when I said I heard someone walk by, it was, no you didn't, you heard the sound of cloth (someone's pants) brushing by, and I wanted to say how am I allowed to assume it's pants but I can't assume it's a person wearing them, but I keep quiet because I'm there with a friend, and some of the other people there seem nice, and it was a one-time free workshop to see if we wanted to join the Meisner Center for regular classes.

And then there was the exercise where we had to count the... I don't know what they're called--the things that hold the ceiling tiles in place. And, we were not to speak until we had a number we would bet our life on. What we should have done then is assume our lives actually depended on it, and pretend that this was a hostage situation or something, because when we took the time to count and the teacher guy challenged us on whether we'd bet our life on the count, I just wanted better instructions, not vague assholery pretending at genius.

But then, I check the timecode when Peter Coyote gets blown up (only 23 minutes in) and am reminded instead of an acting workshop of a cinema class at USC many years earlier when I first learned about plot points and I got to be the asshole pretending at genius when we had to identify plot point one in Some Like It Hot an people said it was when Joe and Jerry witness the mob hit, but I stepped up and said, no, it's when they dress as women to get away, because the movie was not about them running from the mob so much as it was about them having to pretend--there's that word again--to be women while hanging out with Sugar Kane Kowalczyk. And, this movie is not about Lauren and Sandy chasing after Michael so much as it is about them having to put up with each other's company along the way. They get into the taxi cab together after discovering that the body in the morgue is not Michael at minute 30, a far more appropriate time for a plot point. Then they head to Lauren's apartment and find two men ransacking the place. Cue main plot.

Finally, a lunchbox with cash in it shows up. I remembered that thing but didn't remember the acting classes that were central to act one. Weird. I guess Shelley Long tossing cash up in the air to gather a crowd was more memorable than some guy trying to act out Hamlet without using any words...

Which maybe there's something to acting classes with silly bullshit like that, or counting those thingies between the ceiling tiles, but I guess I just want it spelled out. Give me a situation, a role, whatever, but be specific. You want me to act like my life depends on something, tell me that. Especially, in your free class you're using to convince us to throw a whole lot of cash at your school. Doing math and then being told math wasn't the point and every one of us did it wrong--that ain't much of a selling point.

Some questionable humor by today's standards, but the pace is fairly relentless once Lauren and Sandy team up.

Then slows down all over again after they find Michael, lose him again, and end up with the CIA. Turns out Korzenowski is really KGB--which makes sense; genius acting teachers working an extra level of bullshit makes perfect sense--and Michael was CIA but turned. And, I'm not entirely sure how there's still half an hour left of the film when they get Korzenowski at gunpoint.
Posted by robert e g black at 9:42 PM