I wouldn’t say I make a habit of attacking people in this blog. I mean, yeah, I spent a few days on how bad Rubin’s use of voiceover was in the original script. But, mostly, I say positive things. But, I was looking at some of the links I haven’t used yet for this blog, happened upon a couple about the town of Woodstock, Illinois—the filming location for Groundhog Day. And, I just have to say that Maggie Crane of Woodstock is a liar.

Ok, some context: A.V. Club did a piece about Woodstock this past July. At one point, the author points out that “the people of Woodstock are still every bit as excited about their claim to fame, many of them having witnessed firsthand its production—which was, like Punxsutawney, inescapable—and appearing as extras.” One of those people they mention specifically is Maggie Crane, “who missed much of the filming due to her job at the library, fondly recalled fetching the French poetry that Murray’s character quotes to impress Andie MacDowell.” The thing is, as I’ve mentioned before—hell, I did an entry just on the French Phil recites—it’s not French poetry, and certainly not 19th century French poetry, and also, seeing as how it was in the story as far back as Rubin’s revision—

(For the record, I haven’t actually read Rubin’s first revision, but the French is not in the original script. Instead, in the original, Phil invents a line of poetry about Whiskey—“Ah, Whiskey,” he says, “the sliding river queered all, finger and tongue, but no less for wear did I choose that querulous brew…”—to impress Tess Harper of the Jefferson County Poetry Society. By the time of Ramis’ second revision, Phil recites the lines from “La Bourée du Célibataire” to impress Rita. And, in How to Write Groundhog Day, Rubin claims that it’s “a Jacques Brel song I just happened to know.” So, he’s certainly laying claim to the inclusion of these lines, so they must have come in in his first revision. As I pointed out in my entry about the French, Rubin made this scene about Rita and left Tess behind because one of the notes Ramis gave him in their “early meetings was that it’s better to give the best lines and scenes to the main characters.” Of course, Rubin also mentions, “It was great fun to write, and I kept getting better with each new revision. Without Tess, Rita wound up with a penchant for French poetry…” I read this as Rubin intimating that by the time Tess became Rita he had already written numerous drafts. Now, he may have, and just doesn’t consider them “official.” But, in his appendix entitled “Credit: Who Wrote What?” Rubin calls his April 1990 draft (what I call the “original”) his spec script. And, puts his “first rewrite for the studio” in February 1991. Harold’s “first rewrite” as Rubin calls it (and which its own cover and I call the “second revision”) was in July 1991. While Rubin may have written other drafts, the notion that they came somehow between his rewrite for the studio and Ramis getting involved is odd. In his chapter, “A Choice of Suitors,” he explains that there were two offers on his spec script, one from “a small independent producer, IRS Pictures, who promised to make a three million dollar film with a hot up-and-coming director, and to shoot it pretty much the way I had written it.” The second was from Columbia Pictures, “a big studio with big resources” with “a greater chance of the movie actually being shot and distributed, along with a higher likelihood it would be cast with movie stars” and “the director was a known entity—Harold Ramis—who had a great history of successful comedies.” Rubin picked the latter because he “had real grown-up issues to deal with. I ahd house payments, a baby daughter, and a grandmother to take care of.” Plus, he wanted to “launch” himself into Hollywood.

So, to sum up, Rubin wrote the “original” spec script, then the studio got involved and he did a rewrite, apparently based on notes from Ramis. And then Ramis did his revision. And, the French was already in place.

And all that was to reiterate…)

—the poetry did not come from Maggie Crane. So, Maggie Crane is a liar. And, the A.V. Club writer, Sean O’Neal, is not good at factchecking. So, then, I gotta wonder about the other details in his story.

Fortunately, there are others who have visited Woodstock as the Groundhog Day location. Arthur & Amy at wolfstad.com went there in 2005. The Movie Tourist blog went there in 2012. And, the A.V. Club bit does include nice video, so there’s that. Personally, if I manage to continue doing this blog, I’d like to maybe visit Woodstock and/or Punxsutawney in the next year, so I won’t just steal the photos from those blogs and post them here. I can get my own picture of the plaques. 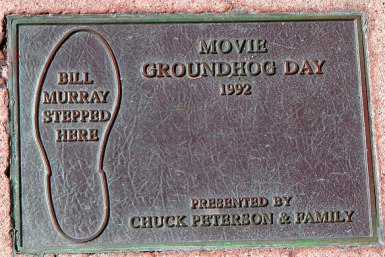 Go. Look. Then, come back here, because they’ve just got those singular entries on Groundhog Day and I’ve got new ones every day.

Today’s reason to repeat a day forever: to find all of my mistakes and fix them… and I suppose I don’t just mean factchecking everything I’ve ever written and catching all of my typos. Those are just the little mistakes, easy to fix.