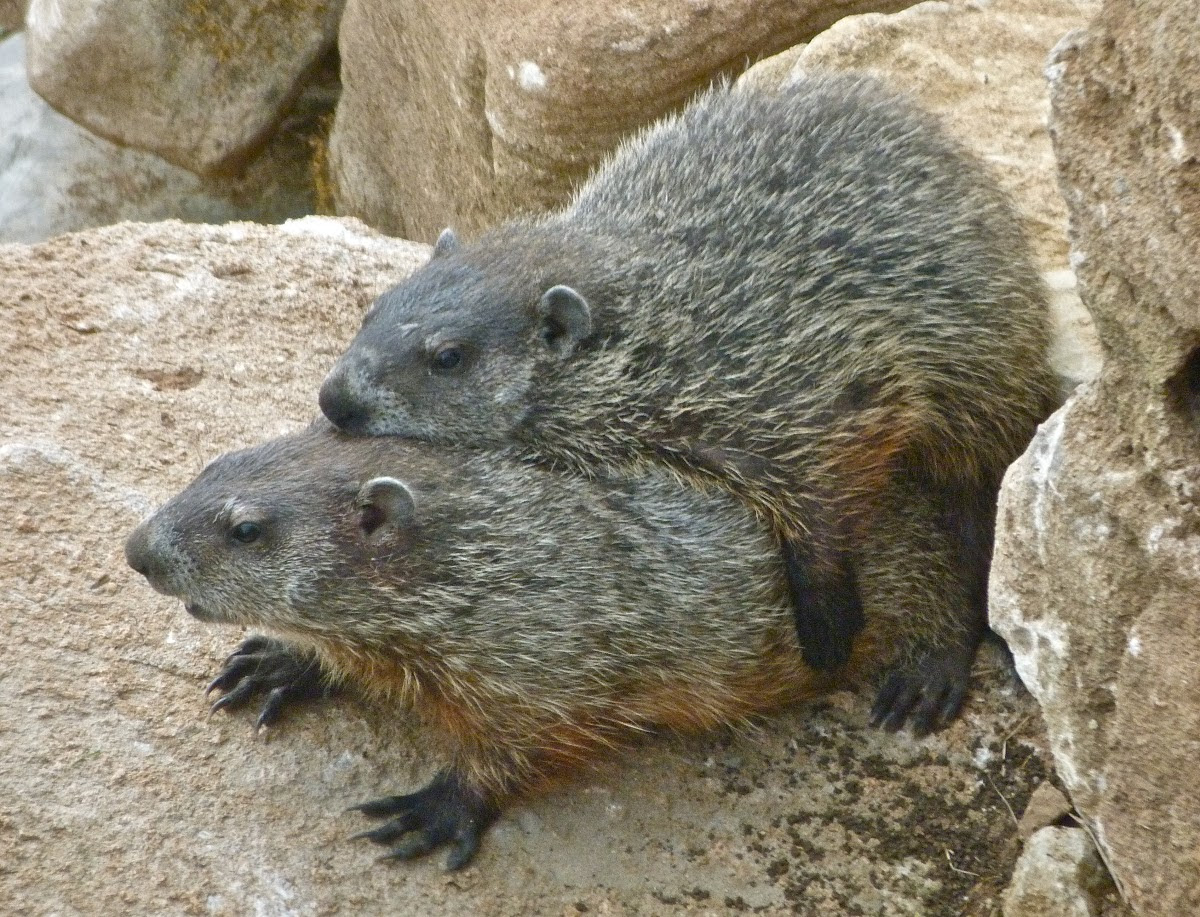 Last year, Todd May wrote a piece for the New York times about “Love and Death” in relation to Groundhog Day. Among other things, he says, “One would not want to deny that Connors comes to love Rita during the period of the eternal Groundhog Day.” I almost wanted to disagree with that bit at first, but he’s not siding with Bacha and Faust. He’s just saying Phil loves Rita. I’ve said that much. I’m getting where I’ve got impulse responses when I see certain things about the film… and really, it’s remarkable how often I can find new things about the film that I haven’t already read.

May continues: “But his love lacks the passion, the abandon, of the love he feels when he is released into a real future with her.” While I wonder if Phil and Rita really have a future, I like the idea here. Phil, when his time loop gets started, has no passion. May points out, “… if the love is to remain romantic, that infatuation must evolve into a longer-term intensity, even if a quiet one, that nourishes and is nourished by the common engagements and projects undertaken over time.” He’s talking about the future. In those date nights in the middle of the film, there is no future. There is the moment and Phil’s still trying to take advantage of it, even as he’s probably starting to relate to Rita… I suppose I should cite Daughton again. Daughton of course suggested thatPhil’s transformation went hand in hand, was caused by or caused, his newfound ability to “fin[d] thing to admire in people he once treated with contempt.” This applies to everyone in Punxsutawney, but Daughton brings it up after describing that moment when Phil speaks to dozing Rita. Phil idealizes Rita in that moment, as a potential partner, sure, but also as an exemplar of something good. We, the viewers, have not really seen all that goodness of Rita. She is, according to Phil speaking to her while she’s awake, “generous [and] kind to strangers and children.” And, while she’s asleep, she is “the kindest, sweetest, prettiest person” he’s ever met. He’d never seen anyone “nicer to people than” she is. To be fair, pre-time loop Phil probably didn’t hang out with the best of people.

May has a nice idea of the future, in terms of relationship possibilities:

This might be taken to mean that a limitless future would allow for even more intensity to love than a limited one. Romantic love among immortals would open itself to an intensity that eludes our mortal race. After all, immortality opens an infinite future. And this would seem to be to the benefit of love’s passion.

At least, he has that nice idea momentarily, then it’s lost:

I think, however, that matters are quite the opposite, and that “Groundhog Day” gives us the clue as to why this is. What the film displays, if we follow this interpretive thread past the film’s plot, is not merely the necessity of time itself for love’s intensity but the necessity of a specific kind of time: time for development. The eternal return of “Groundhog Day” offered plenty of time. It promised an eternity of it. But it was the wrong kind of time. There was no time to develop a coexistence. There was instead just more of the same.

But, I read that as almost missing his own point. He was citing the future promised at the end of the film then backs into the repetition of the rest of the film. That’s not fair. For a second there, the romantic in me was ready to renounce all the bad things I’ve said against Bacha and Faust and just proclaim Groundhog Day a great romance.

Except, I’m not sure I’m a romantic anymore. Hell, in retrospect, as I get older, I wonder if I ever really was.

The intensity we associate with romantic love requires a future that can allow its elaboration. That intensity is of the moment, to be sure, but is also bound to the unfolding of a trajectory that it sees as its fate. If we were stuck in the same moment, the same day, day after day, the love might still remain, but its animating passion would begin to diminish.

And, it starts to get bleak. And, I like it. That makes it seem more realistic. Yeah, the future promise is nice and bright, but the present is the present and sometimes the present sucks. And, even if the present is amazing because you’ve found someone to be with, that doesn’t mean the future is promised. May’s next line is spectacular:

This is why romantic love requires death.

Like some emo teenager, there. Death is the great force that makes it all worth living, at the same time that it makes it all so utterly bleak…

I don’t believe that there are people out there made for us. And, I don’t just mean that in the literal sense because none of us are made for anything. I mean that—and I might sound like a total hippie here—it’s possible to love anyone given the right circumstance. It doesn’t take much.

Love is between two particular people in their particularity. We cannot love just anyone, even others with much the same qualities. If we did, then when we met someone like the beloved but who possessed a little more of a quality to which we were drawn, we would, in the phrase philosophers of love use, “trade up.” But we don’t trade up, or at least most of us don’t. This is because we love that particular person in his or her specificity. And what we create together, our common projects and shared emotions, are grounded in those specificities.

But, that’s limiting. Maybe, as a relationship goes on, yes, it becomes a thing about the specifics of who the two of you are. But, those early feelings—sometimes I feel like I can fall in love any time. Maybe it’s just because I spend so much time alone lately. “Romantic love,” May says, “is not capable of everything. It is capable only of what the unfolding of a future between two specific people can meaningfully allow.” I prefer the idea… or rather, the romantic in me prefers the idea that love is better than that. It’s capable of creating something entirely new, separate and different from the two people involved. And, it can serve those around it, serve family and friends, serve the world. At some basic level, as the Beatles tell us, love is all you need, because loving something means you want to either make it better or help it make itself better. If you don’t… that’s not love. At least not as I see it. I saw a quotation recently—“Those who leave you because they are selective about what they want you to be like, never loved you”—and my impulse was that it was utter bullshit. If you love someone, of course you want them to change, because life is change. You want them to be better, not because you find them flawed (though you might), but because we are all so imperfect relative to who we can be in the future.

Maybe that’s romantic of me—to think that life is some natural progression toward something better. That’s my basic read of Groundhog Day usually, as well. Phil doesn’t change for the better because of his love for Rita or even necessarily because of his ability to relate to “the other.” Phil changes because he has time. It’s really that simple. Phil isn’t cursed with the repeating day. He’s blessed. We’ve all got to figure all of this shit out in real time, but he didn’t. Back in 1993, the year I graduated high school, Phil Connors figured it out…

And, that’s not fair. Yeah, I know, he’s fictional, so he really didn’t figure anything out, but , well, stop trying to ruin my fun. Not that my “fun” is necessarily always that fun. Sometimes, I just… well, you too… we sometimes just grow weary of this day-to-day thing. And, why wouldn’t we? We all relate to Ralph there in the bowling alley because he gets it, life is a bunch of almost entirely identical days shoved up against each other for as many years as we happen to get to live. If we’re lucky, there are brighter moments, brighter days, brighter years. If we’re lucky, there’s someone who thinks we’re worth spending time with. If we’re lucky, we get to do something that leaves us feeling fulfilled. When I’m teaching and I feel a connection with a student, like they’re actually getting something from me—that moment is awesome. When I was in love there were so many moments that were just as awesome. And, I don’t use that word too freely. I mean there are moments in my life that truly bring me awe when I think of them. There have been moments that took my breath away, moments that I would, as I’ve said before, love to experience on repeat.

But, “[s]ooner or later,” Todd May tells us (and I agree), “the paths that can be opened by the specificities of a relationship come to an end.” He continues:

We lose the freshness of our shared projects and our passions, and something of our relationships gets lost along with them. We still love our partner, but we think more about the old days, when love was new and the horizons of the future beckoned us… And how do we live with this? How do we assimilate the contingency of romance, the waning of the intensity of our loves? We can reconcile ourselves to our loves as they are, or we can aim to sacrifice our placid comfort for an uncertain future, with or without the one we love. Just as there is no guarantee that love’s intensity must continue, there is no guarantee that it must diminish.

That’s better than nothing, but it’s hardly positive.

I’m reminded of the short-lived TV series Earth 2. In the future it presents, marriage is a 5-year contract. You can renew it, sure, but there’s no presumption of forever or “’til death do us part.” But, I’m not even sure right now if I want to suggest that’s a brilliant idea or an unfortunate one. Maybe it’s both.

Today’s reason to repeat a day forever: to figure out just how deep a relationship I could forge in 24 hours. I mean, I loved Before Sunrise and Before Sunset and Before Midnight was, at once, both one of my favorite movies and one of the more painful experiences I’ve had this year. I don’t know if I’m a romantic anymore, but I do know that in a very short amount of time we can live oh so much life. Whether there’s a future to it or not, sometimes a brief burst of light can demonstrate just how great life can be. I could use more of that.