Yesterday, I shaved. That hasn't been a usual thing for me for a while. I actually was thinking it had been a year and a half since last I actually was clean shaven--I trim the beard from time to time so I'm not sporting a Z Z Top beard or anything. But, Victor (former speech team president, now a fellow coach and grad student) reminded me of something I hadn't realized. Hadn't remembered. About this same time last year, I was in a photo with another coach, and I was clean shaven. Not sure why he's keeping track--though he says when I'm clean shaven I look to be about 12, so I guess it's memorable. Anyway, the thing is, my birthday was last week. And so, last year, I shaved off the beard around my birthday. Maybe--and this is a stretch, now that I think about it--I just grew out the facial hair so much through the California winter that I just needed to trim it. Or maybe, just maybe, I was feeling old. I mean, there are (were) grey hairs in my beard. I don't think it was conscious, but I'm wondering if It was (subconsciously) on purpose.

What does this have to do with Singin' in the Rain, you ask. Well, I think there's an element of figuring out one's identity in this film. I mean, Don and Lina have to reinvent themselves to be in a talky. And, Kathy has to hide behind the screen image of Lina, of course. Cosmo is only by his association with Don--he doesn't even have his own identity; he's "Don's best friend" and he "plays piano on the set for Don and Lina to get them into those romantic moods." But, he gets to become more important later.

There's something about becoming someone new in this movie.

Take the opening sequence, for instance. Don's story for Dora Bailey (and all the fans). He lies. Well, first of all, there's already a dual identity for "Lockwood and Lamont." One fan's magazine cover has the subtitle: "Real-life or Real-life Couple?" Dora's initial question for Don is about whether "wedding bells will ring" for them. He insists, but with too much push, "we're just good friends." We will learn later, of course, that Lina believes otherwise.

But, I was getting to Don's story. He begins: "Any story of my career would have to include my lifelong friend, Cosmo Brown. We were kids together. We grew up together, worked together." Then, the lies begin. "I've had one motto which I've always lived by: 'Dignity. Always dignity.'" First of all, I'm not even sure what that means. Second of all, it's bullshit. And, the movie makes that very clear. "This was instilled in my by my mum and dad from the very beginning," Don says. "They sent me to the finest schools, including dancing school." The image, on the other hand, provides the truth, Don tap dancing in a pool hall. "That's where I first met Cosmo," he adds, "and with him, I used to perform for all of mum and dad's society friends." Sure enough Cosmo is there, playing harmonica, helping him collect the change thrown before him and getting run out of the place.

"They used to make such a fuss over me," he tells his fans--and us. "And, if I was very good, I was allowed to accompany mum and dad to the theater." As we see Don and Cosmo sneaking into a showing of The Dangers of Drucilla, he adds detail; "They brought me up on Shaw, Moliere, the finest of the classics." Lies. "To this was added rigorous musical training at the Conservatory of Fine Arts." He and Cosmo perform in a bar. "Then, we rounded out our apprenticeship at the most exclusive dramatic academy." Really, they do a comical Vaudevillian number at an Amateur Night. He repeats his motto just in time for Cosmo to break a cane over his head and them both to be yanked off stage with giant hooks.

"In a few years, Cosmo and I were ready to embark on a dance concert tour. We played the finest symphonic halls in the country." Or, really, they performed silly dance numbers with fiddle gags to audiences in Dead Man's Fang, Arizona; Oatmeal, Nebraska and Coyoteville, New Mexico. "Audiences everywhere adored us," he says, and the audience boos and waves them off.

"Finally, we decided to come to sunny California." It's pouring down rain. Then, a moment of honesty: "We were stranded--" And, the tone goes right back to lies; "We were resting up when offers from movie studios started pouring in." They chose Monumental Pictures, of course. "My roles in these films were urbane, sophisticated, suave." He crashes a plane into a building, drives a motorcycle off a cliff, runs into a shack filled with explosives. And, there's his first meeting with Lina. He says she was an inspiration, "warm and helpful. A real lady." She won't even speak to him when he introduces himself. Then, after R.F. suggests he'll be acting with her, she livens up.

Don performs for his fans an idea of Donald Lockwood that they will appreciate. During the screening of The Royal Rascal, a woman in the audience says of Lina, "She's so refined, I think I'll kill myself." That refinement is what Don is presenting about himself. His real story won't impress his fans. They watch movies with him as a swashbuckling, debonair hero, not a common man. They want something better than their own stories. So, he gives it to them.

And we all do that, whether we're famous or not. I was talking to my students today about why some of them call me "Dr. Black." I never told them I had a doctorate. They just assumed it because so many college professors have them. Hell, technically, I'm not even a "professor." I let them call me whatever title they want to call me, because it serves their purposes. (And, makes me feel better about myself, maybe, as well.) And, I play the part of professor, of doctor, the guy who knows all the stuff they need to learn this quarter. Don is not explicit about letting his fans know he and Lina are not together--his "We're just good friends" almost gets lost, it's so brief and quick. Similarly, my students call me doctor and I let them. That is, until we were talking about how we label things and people to set them apart and create hierarchies. Who knows what they will call me now? I'd challenge them to call me "Oh Captain, My Captain" but I don't think they'd get the reference.

But, anyway, even the "Beautiful Girl" bit is about putting on appearances, and the "Broadway Melody" sequence, which otherwise just doesn't fit, is about a young man who wants to be a dancer. He's not anybody just yet, but he's working on it. 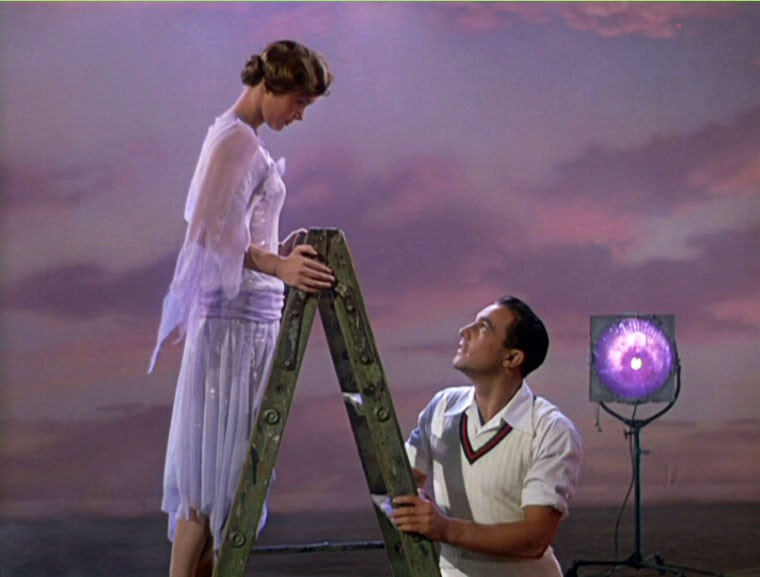 Just now, there was a nice little moment. Don's setting up the scene for "You Were Meant for Me" is kinda lame, but the reason behind it is a great character beat for him. Without a script, or at least a director telling him what to do, he can't tell Kathy how he feels. I can relate; I've never been one to know what to say to a girl. And, it's nice to be able to relate to Don. Though he really has humble beginnings, he's such an... artificial character in so many ways. A good chunk of this movie is about him not being that anymore. Musicals don't tend toward realism, obviously, so it's nice to have a relatable element to the lead. He's human. He may be a leading man in Hollywood, but he can't even express himself quite how he wants to without help.