the kind of friends i would have

7:30 show of The Breakfast Club was sold out, which kind of made me wish even more I'd been there. But, we--my son and I--made it to the second show. I had gone with the high school movies this month because I knew this film would be in theaters, so I'm glad we didn't miss it.

The "event" began with some slide beforehand with trivia (facts, not questions) about the movie and its stars. Some examples:

Molly Ringwald and Anthony Michael Hall dated for a while after filming The Breakfast Club.

Not that exciting, that one.

Judd Nelson was a philosophy major at Haverford College.

On the one hand, definitely more interesting. And, it gets even more interesting when you consider the phrasing. It doesn't say that he got a degree, just that he was a "philosophy major." He could have taken like one philosophy class, for all we know.

Hughes' business partner's son attended New Trier High School where the students referred to morning detention as "The Breakfast Club." John Hughes thought it was a perfect title for his film.

This is the kind of thing anyone who would go to a 30th anniversary screening should have known at least 29 years ago. But, I'm more concerned with the choice to call John Hughes "Hughes" at the start of this one and then expanding it to "John Hughes" in the second sentence. That should totally be reversed. Amateurs.

Ally Sheedy was a published author at the age of twelve.

Yep, a children's book called She Was Nice to Mice: The Other Side of Elizabeth I's Character Never Before Revealed by Previous Historians. At first, when I looked that up, I just found the short title--She Was Nice to Mice--and I thought that's cute. Then, I saw the subtitle, and damn, girl was writing historical fiction for kids when she was still a kid. That's awesome. (Plus, it was illustrated by a 13-year-old.) By the way, she was Alexandra Elizabeth Sheedy then. Shorter name came later.

Originally, only Claire was supposed to dance, but Molly Ringwald felt uncomfortable so Hughes had the entire cast dance.

Molly Ringwald was ranked number 1 in VH1's 100 greatest teen stars of all time. Anthony Michael Hall came in at number 4.

Boring. Knew that one before I knew who Emilio Estevez, Martin Sheen or Charlie Sheen was. But then, my son didn't know, and I hope there were a lot of people seeing these 30th anniversary screenings that weren't necessarily very familiar with the movie. And, good. I'm glad. My son had seen the film before but afterward told me he'd only really remembered the big conversation about why they're all in detention, but didn't recall the dancing or the smoking.

"Don't You (Forget About Me)" was written by Keith Forsey and performed by Simple Minds. Forsey wrote the song after watching rehearsals and talking to the actors. It became a No. 1 hit.

Interesting sidenote: supposedly Forsey asked, among others, Billy Idol to perform the song. Another sidenote: apparently Molly Ringwald recorded a rather bluesy version of the song for her 2013 album Except Sometimes.

After the slides, the "Retrospective" played. It was maybe 10-15 minutes and, I realized as it was playing, quite SPOILER-filled for anyone in the audience who might have been dragged along by parents, say, and never seen the film before. It was a rather straightforward, talking heads (and interesting term considering one of the details coming below) documentary, brief but interesting.

(Note: while I was able to photograph--allegedly--the slides to get them word-for-word, I had to scribble notes for this part, so if my wording is not exact, I apologize.)

Michael Lehmann, director of Heathers, described John Hughes as having his hands on "the pulse of adolescence." Amy Heckerling, director of Fast Times at Ridgemont HighJudd Nelson (John Bender) said Anthony Michael Hall's Brian Johnson "is just lovable. You can't root against him." The film certainly avoids painting him in a negative light--in terms of his actions or words aimed outward, anyway. Diablo Cody, writer of Juno, suggested Hughes' "allegiance is to the geeks" even though the film clearly is more inclusive than that.

Judd Nelson may have had the best insights about the film. For example, he suggested that the key to the earring was that John took it at all. After making a big deal about how Claire had nice things, he arguably shouldn't have, but he does, "if for no other reason," Nelson adds, "so he can talk to her on Monday." Regarding Allison's change in the third act, he says what matters is that she let Claire do something for her. Diablo Cody said she never thought Allison's dark clothes and eye makeup were an affectation but who she was, implying that the change put upon her by Claire was temporary. I wonder if Andy's interest--considering he turned out to actually be a caring person and not the "Sporto" everyone thought he was--won't a) help her make some permanent changes or b) make him open up to the old version a bit more... I mean, he was making an effort to talk to her well before the makeover.

Diablo Cody didn't seem to appreciate the label "teen movie"; I think she called it an insult. We don't label other movies as "adult movies," she said... which made me wonder if she'd ever heard of pornography. I mean, I get her point. As she put it, these films just happen to have teenage protagonists. But, we do so love labels... "basketcase" "jock" "teen movie" "slasher film" "criminal" "princess" "comedy" and whatnot. I think I've argued numerous times now in this blog that all movies are essentially the same. Wright's (1975)* juxtaposition of myth and film as as measures of who and what we are as society and as individuals comes to mind. As with teenagers as with film, the more of them there are out there, the more it seems necessary to group them together and classify them, and, in the case of teenagers, the more they classify themselves and hole up in their in-groups, because what else are they going to do, really?

Finally, Judd Nelson again to end the retrospective (and I will try to incorporate my notes on the screening itself in the next several days if something seems important)... "Don't leave people out in the cold," he said. "Don't talk down to people." Regardless of differences, regardless of in-group or clique, my more profane take on it is this: get the fuck over yourself and spend some time with other people, with different people. Get to know them, let them get to know you. Maybe your interactions won't go past a single conversation. Maybe you'll make a new best friend and discover some new interests for yourself in the process. Whatever happens, you will be better off for having done something new. 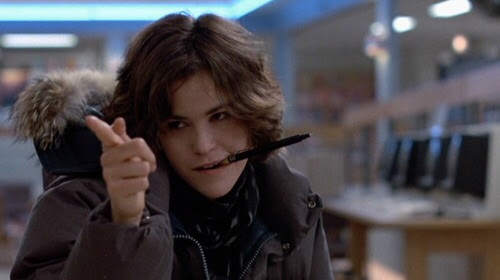 * Wright, W. (1975). Sixguns and Society: A Structural Study of the Western. Berkeley: University of California Press. - Because there will be westerns in this blog soon and I'm studying up.