the ones that really hurt

Something that bothers me less the more I watch High Fidelity: that Laura's father dies as a deus ex machina third-act turnaround for Rob and Laura. I mean, in terms of story structure, it is a cheap trick, an easy out. Make Laura too tired to keep rejecting Rob and Rob doesn't really have to reform himself, he just has to sorta imply that he might want to. He is our narrator, after all, so we're on his side. Whether we're on his side or not.

I've complained previously about Laura's father's death being such an easy out but, here's my thing today: this isn't a story about Laura's father dying. We don't even know how he died. [Barry's invented song later 'The Night Laura's Daddy Died' implies he had angina.[Also, Rob listens to a voicemail from Laura's mother about her father's angina, but I somehow didn't hear that during many viewings.]] This isn't the tale of Laura's dad dying slowly from some deliberating disease while his children return home from wherever they've moved onto with their spouses and 2 1/2 children and white picket fences to be with him in the hospital. So, how else is he supposed to die?

Assuming that him dying is an acceptable choice in the first place in terms of the story of Rob and Laura, and why isn't it as long as people actually do die and people actually do make rash decisions in the face of grief. Laura being too tired to stay away from Rob after her father dies makes sense in her story. Nevermind plot. Nevermind the act structure of Classical Hollywood Cinema. I'm talking story. I'm talking, here's a woman with a job she likes (even as Rob thinks she doesn't) and a boyfriend she doesn't like (even as Rob thinks she does).

(And, fifteen minutes in, the customer that Barry runs out of the store is a father buying, or trying to buy, "I Just Called to Say I Love You" for his daughter." Just as Rob and Laura fail to actually have a conversation over the phone, their first since the breakup. Played a little differently, it would almost work as foreshadowing for the death to come, but in execution, it is just one of Barry's asshole moments.)

Laura has finally gotten up the nerve, or whatever, to leave Rob. But, that doesn't mean she's happy with her decision, it doesn't mean her decision was easy. It doesn't mean there isn't pain on her side of things. She just isn't our narrator. Her pain is in a pocket on the other side of the fourth wall. Rob's is on display for us, open to us, mansplaining and excuse-making included. Her story is told at a distance. So, her father's death can't be set up beforehand. It just can't be. And, it would be unrealistic if it were, or it would change the movie from one type of film to another. People die. People die suddenly.

(Similarly, and in a sort of echo to the interjection of Laura's father into the proceedings, it occurs to me that the interjection of Rob's mother, just happening to call him the night after he and Laura broke up, is kind of out of place in terms of plot structure. She offers up the recurring course of Rob's love life, and does so succinctly--"You meet someone, you move in, she goes. You meet someone, you move in, she goes."--but we already know this by then, and she never calls again even though the film covers a long enough stretch of time that the coincidence of her calling just as Rob's story is getting underway cannot just be one of her regular calls on a Monday night.)

Breakups, too. They've got plenty of foreshadowing, of course, because relationships have problems. But, that doesn't mean that when it finally happens, we're ready, or that we expect it. And, even if we expect it, that doesn't mean it doesn't hurt. Same with a death in the family. Act one, Rob experiences the big breakup and he rethinks his life choices to the point of self-absorbed insanity. Act three, Laura experiences a death in the family and she rethinks (or is too tired to think) her recent choices and gives in to his absorption. The echo almost works. 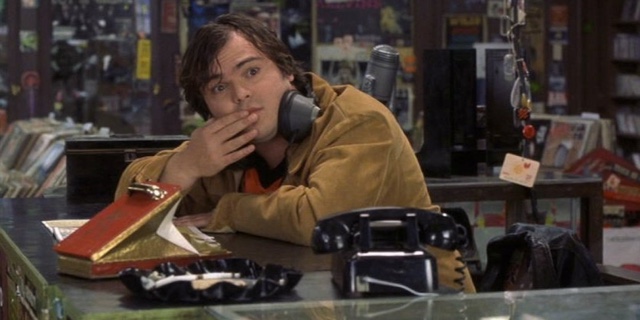 Finally, think about it like this: the plot begins en media res with the breakup having already triggered. Rob meets Marie De Salle (Lisa Bonet) at a club, slightly different situation from how he met Laura, but not far off. He meets Caroline Fortis (Natasha Gregson Wagner) at the shop, like Dick meets Annaugh, like Barry meets his new bandmate... It's all coincidences and randomness and suddenness. Otherwise, you know, life. Whether High Fidelity encapsulates so much of what makes life life deliberately or by chance, it has to include a birth, a death, and/or a wedding to really resonate. It's how this sort of story works. Play it like a simple, intimate look at one guy's life as he goes through some shit, but throw in a funeral because it yanks it all down to a more real level. Whether that really works or not is up for debate. But, in terms of what films do, what stories do (remember, this came from a book), this is how to build it up into something greater than the sum of its parts.

Plus, you know, people do die.