Today's film is a little bit of a cheat like Highlander was. While I saw Stand By Me in the theater, it was not really a fixture in my movie life until I was a teenager and I bought my own copy on VHS. But, then this was a movie I would watch time and time again, only in my 20s. And, I even ripped it off a little bit--or paid homage to it, I suppose--in my second novel. Actually, I think that was more ripping off--or paying homage to--It actually. There was even a battle between kids throwing kids at each other.

The thing is, speaking of my writing, I often snagged bits of setup or stylistic things
from Stephen King. For example, in my... I want to say fourth novel--


(None of these have been properly published, by the way. I had a few of my novels available self-published for a bit about a decade-and-a-half ago, but no longer. I recently did a re-edit of what's probably my best writing--a novel called Clubhouse Blues, which I'm sure I've mentioned in this blog more than a few times--and submitted it as an ebook for kindle. But, I haven't heard back about that yet.

A few of my novels need major rewrites before I'd want anyone to read them. A few of them I still think are quite good.)

Anyway, in a novel called DemonAngel, which might have been my fourth novel, the first-person narrator had a tendency to do, well, the same sort of thing I do in this blog all the time--interrupting the flow with a good parenthetical as its own paragraph. For Niko, the narrator and protagonist, the parenthetically begin as passing thoughts but by the end of the story, they serve as the psychic communication he has with, mostly, the love interest of the novel, Ginny. I stole those parentheticals from... I want to say Insomnia, but I'm actually not sure after all these years. 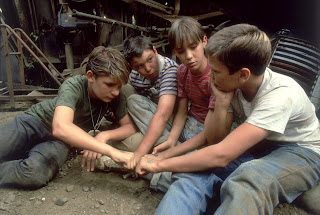 See, when Stand By Me was in theaters, I had not read any Stephen King yet. A year, or maybe two, later, looking at the sale books at Crown Books on Lake Avenue in Pasadena, I'd find a copy of The Gunslinger. Not even King's usual horror, but I bought it, I read it, and I wanted more. I don't remember which novel came next, but by the time I was out of high school, I had hardcovers of every King novel, paperbacks of most

(I even made it a thing, for some stupid reason, to buy every paperback of the original version of The Stand I ever found at a yard sale or the local flea market held the first Sunday of the month at PCC.)

and even had some rare editions of things. I had original paperbacks of the Bachman novels. I had (and still have, though most of my King collection was handed down to my son Kieran many years ago) two proof editions (It and Desperation), the pop-up book of The Girl Who Loves Tom Gordon.

Which came out as recently as 2004, it seems. But, up until about Cell in 2006, I bought every King book when it came out and would read it ASAP. Since then--or really since the final The Dark Tower book came out in 2004, I bought a few, even ebooks recently, but haven't read them all. There was a time where I had read everything he had published (except for some reason Firestarter; I'd plan to get to that one, and then some new book would come out and I would read that one instead.

I had even gotten my hands on (literally) a few really rare King books--like the metal-bound version of the short story "My Pretty Pony" that had a digital clock in the cover. But, that one was too rich for my blood, and I was ready planning on buying Rage, The Running Man, The Long Walk, and Roadwork on that particular trip to Book Baron in Anaheim.

But, back in high school, though--that's where this story was headed--or I guess it was junior high. Private school. Expectedly miserable and wonderful, as high school should be. In English class, we had to read 1000 pages a quarter, and fill out book report cards on the books that made up that 1000 pages. Smartass me, the first quarter of 7th grade, I'm like, I'm reading War and Remembrance, 1300+ pages. Teacher warns against it. I do it anyway.

Next quarter, I aim easier with a few shorter books. Stephen King isn't allowed, because his books aren't literature. The thing is, I read King too. And, my English teacher says I'm wasting my time reading that. Maybe just because it was pages that wouldn't count--but he should've known I could handle the required page count well enough--but really, the way I remember it, his tone said that King wasn't worth reading. I read a few more King novels that year, in between the other stuff that "counted", and I made sure to bring those King books with me into class, and sitting in the hall.

Because, fuck anyone who tells you something isn't worth reading. I mean, unless you ask. But, I'm an adolescent boy, reading all the proper literature I'm supposed to, but also reading Stephen King, also reading Isaac Asimov, drifting into more horror and more science fiction through junior high and high school, because what was good for me didn't need approval from some private school English teacher.

(Or anyone. I think I've mentioned in this blog before at some point the incident with the Lone Wolf books and getting on confiscated and that leading to my mom making me get rid of the whole set (which was, I think, 16 Lone Wolf books and 4 Grey Star books at the time). Years later, I would buy those books all over again out of spite.


No one ever made me get rid of my Stephen King, though. Probably because, aside from the Dark Tower books, they weren't illustrated, so the assistant math teacher wasn't spying a big demon creature over my shoulder and asking me what I was reading.)

The same went for movies once I could make the choices for myself. As a kid, I would already watch anything I could get away with watching. As a teen, I started buying my own movie tickets, renting my own movies from Blockbuster or Now Playing, and I also took advantage of hanging out at my sister's place on a stray Saturday night and we'd rent whatever looked good to us.

I would seek out whatever book I wanted, whatever movie I wanted, as I got older. Even now, I'll see a few movies a week in theaters (at least until Covid-19 changed things up), and I'd watch good movies and bad, Oscar-hopefuls and low-budget pieces-of-crap. There's just something about movies that I latched onto when I was young and I never let go. Rewind through 1380 previous entries to understand why. Or know yourself, why you watch movies, why you bothered to read this blog entry, or any other entry here.

It's magic, and it can be anything, anytime. Horror, science fiction, melodrama, comedy, or a relatively simply coming-of-age story like this one.
Posted by robert e g black at 9:19 PM