it should have been you

There's a really basic take on Stand By Me--it's about four boys growing up in the face of their own mortality--and there's plenty to explore just there. But, I kinda like the more specific thing regarding explicitly Gordie but also to increasingly lesser degrees--again, because this is Gordie's story--Chris, Teddy, and Vern. That thing is an old standby in this blog--identity.

Vern's is simple. He's the timid one, clearly still more of a kid than the other three. Just look at him saying "Geronimo" when he jumps off the train tracks when Teddy goes for the dodge. But, Vern has to at least gotta grow up a little by the end.

Teddy, despite how horrible his father has been to him, still idolizes his father and clearly wants to be like him. His father stormed the beaches at Normandy. Teddy dressed in military colors, wears what is probably his father's army belt and surely those are his father's dog tags around his neck, and he makes a thing about playing like a soldier more than once in the course of otherwise normal activity (like screaming "take no prisoners" when they run down the field to take a shortcut through the woods). And, of course, he defends his father, even to the point of threatening death, when Milo Pressman calls him a looney. Despite his need to be like his father, despite the possibility that he already is just like his father with fits of rage, in the end, he is resigned to doing what Chris tells him because Chris knows better.

(Sidenote: I wonder how specifically King meant it to feel like all of these boys' fathers fought in World War II or Korea, not just Teddy. Chris' father is a drunk. Gordie's father favors stereotypical masculinity in Denny (and degrades or at least ignores Gordie for not being like Denny) like a guy who has had that sort of thing ingrained in him for years, and surely he must've volunteered to go fight the Krauts or the Japs or whatever racist shit drove recruitment around Castle Rock. And, the boys are turning 13 in 1960-ish, meaning they were boomers born right after their fathers returned from war and got hitched.

Also, it has bugged me for a long while that Denny died in a Jeep accident. I was under the impression--my own father had a Jeep CJ5 since as long as I can remember--that Jeeps were still military vehicles until at least the 70s. So, I have assumed for years that maybe Denny had signed up for military service. Even though the film doesn't explain it well...

So I check the book for a moment (also I check the Wikipedia on Jeep and learn they had some commercial models just after WWII), and find first a reference to the flag on Dennis' coffin at his funeral, and then I page backward and find that sure enough he died "at Fort Benning, Georgia, where he was in Basic."

Also, book Gordie cried a lot at the funeral. But, the film needs an opening for Gordie to talk about how much his brother's death bothers him.

I think--and I recall something from an interview or an introduction somewhere (but not in the Different Seasons collection), King saying something about going to see a dead animal--that King was writing from his own personal experience. Each of the four boys has a little of King's own childhood in him, probably. King's own father left when he was young. And I swear King has referenced his own alcoholism and drug problems in connection with his father being an alcoholic as well, but I can't recall where I read that. Maybe I invented it.

This film is set at an interesting time. World War II was the older generation's problem. Korea hit their parents or their older siblings, and Vietnam isn't here yet. I imagine (separate from what little we learn about these boys' lives at the end of the film) that Chris and Gordie might've been drawn into the free speech movement or with anti war protests. Teddy probably would've volunteered for Vietnam, and he'd come back even more damaged than he already was. And, all he can do around town is odd jobs because he's probably volatile and unpredictable. Vern probably dreaded the draft coming, or maybe since Vern was the fat one, he wasn't in the right shape for active service. (It's interesting that years later when Jerry O'Connell became a household name of sorts, around the time of Sliders and then later with Scream, was physically so much different than he was in this film as to be unrecognizable. His face was still mostly the same, but he'd become tall and thin... Not that Vern is particularly overweight, but he fits a type in the story. Chris and Teddy are the normal ones, Gordie the thin one, Vern the fat one.

Chris might've even become a sort of revolutionary, or at least a hippie. Maybe more the latter, as he always made the best peace. But, he'd turn a little establishment enough by becoming a lawyer, but even violent radicals like Bill Ayers, Bernardine Dohrn, or Mark Rudd turned into "responsible" adults once they weren't on the run from the FBI.

Gordie, in the book, ends up an English teacher and a writer just like King.

And, looking more at the book--keep in mind, I read The Body at least 30 years ago--I'm surprised to find that Vern and Teddy actually died before Chris did. And, duh, Teddy never got into the military because of his ear (which, in the book, he's also got a hearing aid) and his bad vision. The film setup might be an improvement. Nevermind Gordie as the last survivor (though that might tie in well with the obvious theme of growing up in the face of mortality), all he needs is the singular trigger of the friend he clung to through the years.) 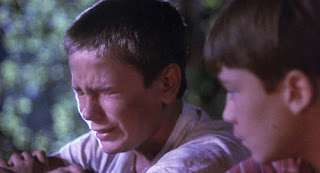 Chris is a great character who you just know has a complicated life we are only barely seeing. He comes from a family nobody likes. His older brother is a hooligan. And, Chris himself is a thief. But, he can't manage to be "one of those low-life Chambers kids." He snags his father's gun and all the remaining bullets just in case, and assumes his father will think he used all the bullets when he was drunk and shooting at cans. But, there's an interesting beat in the film--Chris gets dropped off in town by two guys in a pickup truck who seem perfectly fine with giving this kid a ride (and in the book, it's a car that Chris gets out of instead of the back of a pickup--far more personal). He's a Chambers but clearly that isn't as bad as being a Duchamp. There are levels to Castle Rock. Class levels. And, Chris has the potential to rise out of the position prepared for him. Teddy might aim to but it is hard to imagine that he ever would. The movie version of Vern's future is understandably simple--he got married and had kids. But, so did Gordie.

Chris, though... Try to imagine him growing up and getting married. It's harder. There's something about him, and maybe part of that is subconscious because River Phoenix would never get the opportunity himself, that it feels like maybe he'd have some passionate love affairs, but they would be brief. He would always be too busy saving people. Breaking up fights. Taking on underdogs as clients in court. Protesting the war in Vietnam. In the book, Gordie says,

We both dated through high school, but no girl ever came between us. Does that sound like we went faggot? It would have to most of our old friends, Vern and Teddy included. But it was only survival. We were clinging to each other in deep water. I've explained about Chris, I think; my reasons for clinging to him were less definable. His desire to get away from Castle rock and out of the mill's shadow seemed to me to be my best part, and I could not just leave him to sink or swim on his own. If he had drowned that part of me would have drowned with him, I think.

And finally, Gordie offers this after he read about Chris' death:

I told my wife I was going out for a milkshake. I drove out of town, parked, and cried for him. Cried for damn near half an hour, I guess. I couldn't have done that in front of my wife, much as I love her. It would have been pussy.

Chris is a powerful force in these other boys' lives. An absence to be felt.

And, we will have to leave Gordie's part of it for tomorrow.
Posted by robert e g black at 8:15 PM