doubly dying, shall go down

Edge of Tomorrow, as I pointed out yesterday, is like Groundhog Day but with guns and aliens and a lot more death. In case you don’t trust me:

“If you've ever watched the film Groundhog Day, and thought that the only thing that could possibly make it more enjoyable was an alien invasion or some massive explosions, you're in luck.” – Julia Emmanuele, Hollywood.com

“Like Bill Murray in Groundhog Day, Tom Cruise as officer Bill Cage in the upcoming sci-fi movie Edge of Tomorrow is reliving one hell of a day over and over again. Unlike Groundhog Day, this action thriller is a bloody and explosive time loop.” – Brian Anthony Hernandez, Mashable

“…he finds himself waking up to face the same fate, much like Bill Murray's experience in ‘Groundhog Day.’” – Greg Gilman, The Wrap

“he gets better and better at fighting, braver and braver,and more and more attractive to the imperious Rita. Just like Bill Murray mastering the piano in Groundhog Day.” – Peter Bradshaw, The Guardian

Gotta include the negative stuff:

”As for Tom Cruise as Cage, well … he starts off bad and winds up good, but really this isn't a metaphor. He drops into a time loop. He fights. He is super-awesome. That's it. It's supposed to be exciting, not funny – although Groundhog Day was exciting and funny.” – Peter Bradshaw, The Guardian

”Have you ever dreamed about what it might be like to relive the same day over and over again in an endless search for the perfect 24 hour period of existence? Of course you haven't, for that is the plot of much-loved Bill Murray/Harold Ramis comedy classic Groundhog Day, and each and every possible hilarious scenario has already been played out for you via one of the sharpest and most intuitive scripts of all time.” – Ben Child, The Guardian Film Blog

But, that’s not my point today. Today, I intend to discover whether or not Scientologist Tom Cruise portrays a notable Cinematic Christ-Figure in Edge of Tomorrow just like Bill Murray portrays one in Groundhog Day.

(While I have proposed a Kozlovic-Black scale, the only real addition was a sense of atonement, per Larsen (2013), and Edge of Tomorrow’s William Cage does not demonstrate atonement per my discussion of that aspect on Day 135: i gotta do this report. So, I will simply be using the 25-item Kozlovic Scale.) 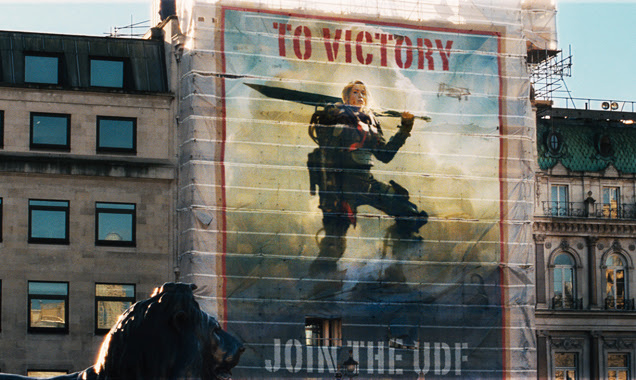 The Cinematic Christ-Figure must (and take that must with a grain of salt, as the point of this scale is that only some of the criteria may be met)…

1 – be “tangible, visible and colourful.” William Cage, like Phil Connors, and pretty much any major film character, gets this point. (1/1)

3 – “typically” be an outsider. Cage is forced into active military duty after refusing an order in his position as a PR guy (i.e. not having to fight). (3/3)

4 – “arrive onto the scene through some sort of deliberate outside intervention.” I just covered that one in #3. (4/4)

5 – have alter egos or dual identities.” Throughout Edge of Tomorrow, Cage is seen as a new recruit by his commanding officer and his squad, though through resumption after resumption of the time loop he becomes a better soldier than any of them and has a secret “identity” as an Alpha (you’ll know what that means if you see the movie, but it really isn’t much of a SPOILER). (5/5)

6 – be “rare and unusual beings although they typically appear as normal humans doing mundane activities throughout their normal working lives.” While Cage’s “normal” working life has just been severely altered at the beginning of the film, my explanation for #5 covers this one as well. (6/6)

7 – have the “iconic number of twelve intimate friends-cum-associates” but Christ-Figure films “usually have a lesser number of Apostle-figures to avoid overly complicating the storyline.” This one is a bit of a SPOILER. Cage’s squad, though actually smaller in number (at least the ones we get to know and who go on the third-act mission with Cage and Rita) definitely qualify here. (7/7)

8 – start his “divine” mission at the age of 30. Cage does not take this one. But--SPOILERS—Emily Blunt’s Rita does; Emily Blunt turned 31 in February so was 30 when this film was made. She went through the same time loop that Cage is going through previously, and presumably that would mean she would have gotten the same points as Cage does—we just don’t get to see her repeating day, so I cannot be sure. For Cage… (7/8)

9 – have Judas-Figures. As Edge of Tomorrow was going, I wasn’t sure this one would happen, but then—SPOILER—Cage has to return to the General who initially got him reassigned, and while it seems the guy believes Cage about the time loop and gives him the device he needs, he then has his men try to arrest Cage. That plays like betrayal to me. In fact—EVEN MORE OF A SPOILER—this betrayal leads directly to Cage losing the time loop power, so… (8/9)

10 – have a Mary Magdalene-Figure, a “sexually tagged woman” according to Kozlovic, that is a character specifically identified by her gender and/or by her sexuality. On the one hand, Edge of Tomorrow’s Rita is more of a soldier, because of her time loop experience, than all the guys, her time loop-fueled heroism at a previous battle earned her the rather feminine nickname, “The Angel of Verdun.” 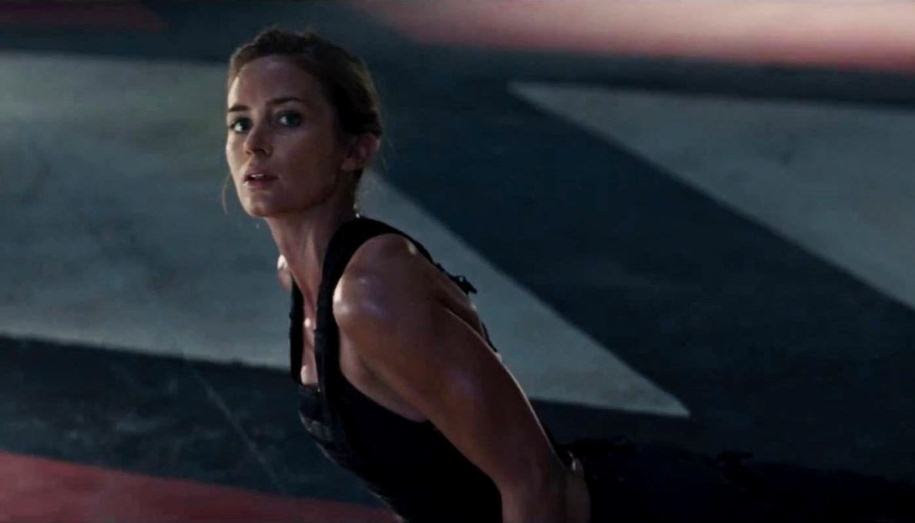 Plus, her secondary introduction (i.e. not on the battlefield but when Cage goes to her for training, she’s got a very feline/feminine move going on as she gets up. The relationship is not consummated, but it is (heavily) implied that they might get together after things are done. (9/10)

12 – “‘die’ frequently and then miraculously come back to life again as good-as-new, if not better.” This is what Edge of Tomorrow is. Cage has to die every day for the loop to reset and with each resumption he gains a little more knowledge and a little more skill. (11/12).

13 – have a “holy death” that results in “triumphal victory.” I lost count, but Cage has many deaths and, of course, the movie—SPOILER but this one is obvious—ends with a triumphal victory. (12/13)

14 – have “sacrifices” that “specifically benefit others and are based upon higher principles, although these others are usually of ‘lesser’ worthiness, talent or power, comparatively speaking.” The whole point to Cage training and running through the battle over and over is him becoming better in talent and power than everyone else on that battlefield and beyond. (13/14)

16 – be “accused of crimes although totally innocent.” Cage does commit a crime in the opening of the film, actually. His attempt at blackmailing the General to get out of reporting from the frontlines is what gets him stuck there instead as a new recruit. He is not innocent. (14/16)

17 – be displayed in a cruciform pose… this one is problematic. I did not notice Cage in this pose, so there wasn’t an obvious one, like, say Superman in Man of Steel; he gets two:

But, just because I didn’t notice it does not mean it didn’t happen. Still, I will not give Cage this point, so… (14/17)

18 – be accompanied by cross imagery. Again, no cross imagery per se, that I noticed. But, I find it interesting that Cage’s first time into battle, he is strapped into a metal suit he does not know how to control, which is the very reason he is killed the first time, setting the time loop into motion. He is basically strapped to a (cross) and sacrificed. I’m giving him this one. (15/18)

19 – demonstrate incredible, even miraculous, behavior. Cage dodges and shoots things he shouldn’t even know are there (from the perspective of those around him) and has his “god day” moments of revealing knowledge as well. (16/19)

20 – “appear as bumbling simpletons, klutzs, nerds, mentally unbalanced, or fools.” See #18; Cage goes into battle without even knowing a) how to operate his suit or b) how to fight at all in the first place. (17/20)

21 – show “pronounced poverty, or alternatively, the troubling question of what to do with money if available.” Money never really comes up in Edge of Tomorrow. (17/21)

23 – have blue eyes (a cinematic conceit despite a realistic Jesus not being likely to have blue eyes). Tom Cruise’s eyes are brown. (17/23)

24 –be around characters who say what Kozlovic calls “verbal tags”—stuff like “My God!” or “Jesus Christ!” or even “Gee!” Forgot to pay particular attention for these things, but there is at least one noticeable variant on this stuff when Bill Paxton’s Master Sergeant calls battle “the fiery crucible in which the only true heroes are forged.” (18/24)

25 – have names related to Christ or the initials J.C. If William Cage’s middle name were James or John or Joseph, I might give him half a point, but no. (19/25)

Cage’s final score is 19. So, he ties my prospectus—

(I wrote a prospectus for a study solidifying Kozlovic’s scale and I scored 3 films on the handout that went with my presentation: Man of Steel (and Superman: The Movie sort of), Groundhog Day and Die Hard.)

--score for Man of Steel’s Superman but loses by 2 points to Superman: TheMovie’s Superman. Die Hard’s John McClane scored a 17, so William Cage beats him. I initially scored Phil Connors at 22, but on my handout I reduced him to 20 (with a 21 if you go by Rubin’s original script), so while Cage comes close, he does not beat Phil Connors in Christ-Figuredness.

He is definitely a Christ-Figure, though.

Today’s reason to repeat a day forever: to measure every protagonist in every film for his Christ-Figuredness.