While this draft does give some more examples of Phil being an ass, he also seems a little more reasonable in some instances. Case in point: Rita asks, "What do you want me to do?" In the film version, Phil says "I don’t know! You’re a producer, come up with something." In this draft: "The truth? I'd like you to spend the next 24 hours with me and don't leave my side for a second." It reads at first like he is genuinely trying to get Rita's help, asking for it rather than demanding it. But, here is where, in this draft, Rita says, "You know, Phil, you can charm all the little P.A.'s at the station, all the secretaries, and even some of the weekend anchors, but not me--not in a thousand years" (p. 41).

Of course, then that thousand year bit at the end reads like deliberate setup for the unspoken joke to come--Phil will spend a thousand years chasing after her and eventually she will be charmed. It's one of the faults in Ramis' writing, maybe coming from his background in improv; he treats dialogue like constant setup for potential punchlines.

The "Scientist"/Science Teacher is still in this draft, as is the teacher whose class is going over the Frog Prince. Ralph (later to be switched with Gus in regards to their personalities) still wants to "spend all my time drivin' fast, gettin' loaded and gettin' laid. That's it" (p. 46).

Though Phil has already met Nancy at the hotel bar in this draft, his meeting in which he gets her information--"Nancy, Lincoln, Walsh"--happens at Gobbler's Knob rather than in the Tip Top. This is ok at first, this bit coming before Phil's scene with Rita at the "Diner." And, speaking of that scene, there's only minor differences. Rita still quotes Sir Walter Scott, for example. But, when she suggests Phil has a death wish (not a line that survive into the film), Phil replies, "Just the opposite, Rita. I have a life wish. I'm just trying to enjoy it. Taking pleasure in the little things" (p. 54).

Phil tells Rita that he "got completely loaded and smashed into a police car" the night before.

"Oh, really? You look pretty good this morning," she replies.

"That's my point," Phil says. "I know you won't believe me, but we could do anything we want today and it wouldn't matter one bit. Absolutely no consequences. Complete and total freedom. We don't even have to floss."

"And how do we manage that," Rita asks.

"You leave that to me," Phil replies. "Why don't you send Larry back and hang out with me for the rest of the day? You never make it through that blizzard anyway."

"I'll take my chances with the weather," Rita says. "But you have a good time."

But, then he doesn't have a good time. He doesn't do anything. Structurally, it makes sense for his info-grabbing bit with Nancy to follow this dialogue; then we don't need to actually see Phil having a good time today because we know something is in the works for tomorrow. Instead, this Scene 69 cuts to Scene 70--the next day at Gobbler's Knob as Phil finds Nancy. In this case, the setup is misplaced. 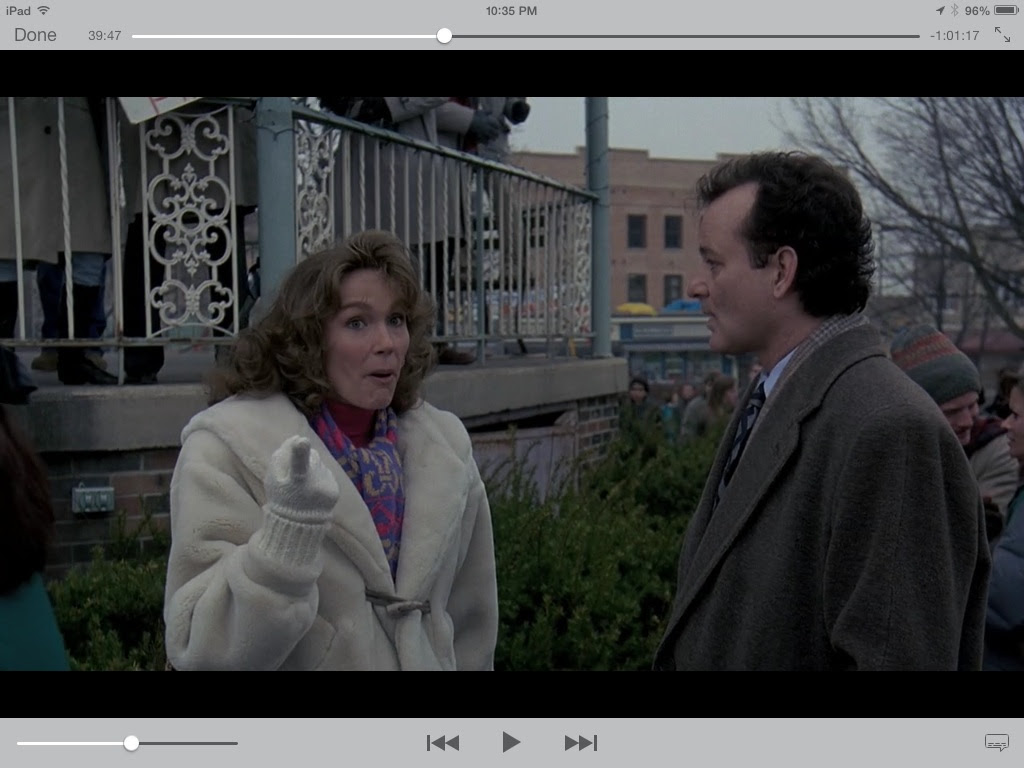 "Orita" survives into this draft. It's just silly enough that it could have been funny in the movie, had it made it that far... In case you do not recall, after Phil's Freudian Slip of saying Rita's name while "making passionate love to" Nancy, he claims, "It's just something I say when I make love. You know--Orita, Orighta--it's like 'Oh, baby' or something." Nancy doesn't quite buy it, and yet he still doesn't propose marriage in this version.

Page 58, Phil tells Mrs. Lancaster he's been there for 221 days. He's looking at her books at this point even though the book calendar thing has been abandoned already.

Scene 73: Phil robs a bank, wielding a shotgun rather than the much more clever and less scary robbery in the film.

Scene 77: Phil gets "elaborately tattooed." Rita sees it through the window. He waves. That's about it. Thing is, why bother with tattoos given the time loop? Next resumption comes, tattoos are gone. Time loop ends, Phil's stuck with tattoos. It's pain for no reason.

Scene 79: "A slut named ANGIE and another overweight, not very pretty MADONNA WANNA-BE, both in too-tight jeans and bullet bras" survive into this draft. Angie even pops some pills into Phil's mouth (p. 61). Scene 80: this becomes Phil's lowest point, so to speak (not counting, obviously, his deaths). Sitting with his arm around Angie, "a fifth of Wild Turkey in his hand," says:

Yeah, but eventually you'd just get tired of screwing around and then you'd want a real relationship, wouldn't you? (p. 62).

Okay, it's not necessarily his lowest point... exclusively. It's also his epiphany. After this, he starts into the "date night" sequence; he pursues Rita.

Scene 82, Page 64, Rita says a line that seems more befitting Phil; she says, "Doing stories on the Punxsutawney groundhog is not my ultimate goal. No offense." Sure, at the beginning of this draft, Rita wanted to work on a nurse's strike when Hawley assigned her to Phil's venture to Punxsutawney, but Rita--and I admit this is dangerous phrasing--is supposed to be better than that.

Page 65, Rita says: "Phil, you know, you have so much talent and ability. If you'd just drop the attitude and act like a decent human being, then maybe I'd--" Setup for the punchline of the end of the film.

Rita's favorite drink in Scene 86 is not Sweet Vermouth on the rocks with a twist, it's the less interesting Tequila with lime. Tess (the woman Phil was pursuing at this point in Rubin's original script) ordered a drink like that. It makes sense that Rita would order a froufrou drink like Sweet Vermouth on the rocks with a twist. That or something really colorful and fruity with an umbrella in it. It's who she is. In this draft, she's still got a little bit of Tess left in her, I suppose.

Weird detail to the big climax of date night (p. 72). Phil gets Rita into the Cherry Street Inn but before they make it up to his room, they pass through the vestibule and Phil steals "an old console hi-fi" because, he says, "We're going to need some music up there." That they need music works, sure. But, is theft suddenly endearing to Rita? I doubt it. Plus, Phil should be far enough ahead here--especially since he only half a page earlier told Rita, "I've been planning this day for weeks"--that planning for music should not be a last-minute thought.

I will leave you with this for part two: "The whole secretarial pool is a Phil Connors recovery group" (p. 74).

Today's reason to repeat a day forever: to be more consistent in my characterization than Rita is in hers.