he just wanted his machete back

Jason Voorhees in chains, his hair a frizzy (grey?) mess. Nice start—would have been even cooler if they didn’t have the onscreen descriptions of where we are and why he’s there. It’s not a crawl, but on a Red Letter Media “Best of the Worst“ video this week, they were talking about how film crawls usually set the world badly, give too much information and/or information you just don’t need. Any audience going to see Jason X would have been quite likely to know who Jason is, and we’d figure out what was going on. A little more showing us, a little less telling us.

By the way, I link this movie to Hellraiser: Bloodline in my memory, as if they came out around the same time—a couple horror movies set in space

(I also connect them both to the bit in Halloween 5 when they talk about Michael Myers in space.)

—but they were 6 years apart, Jason X being the later of the two.

Saw Hellraiser: Bloodline at a test screening, if I recall correctly. Might have just been a special premiere screening—tickets through Mark and Brian maybe. Don’t think I saw Jason X in the theater at all... 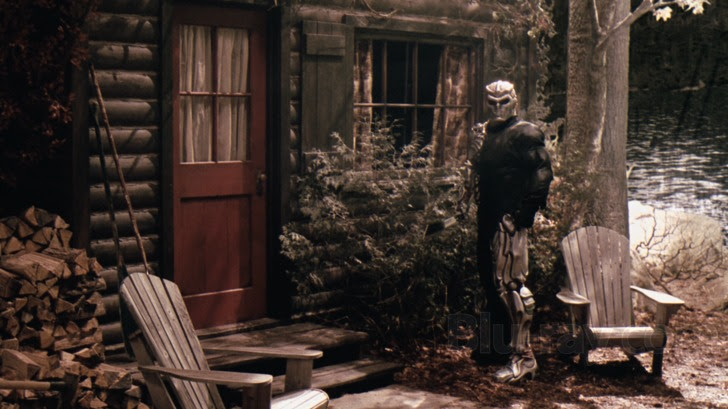 I argued recently—In this blog and in its comments section—that every horror film is about sex, or at least has something to say about sex and/or gender. The robot girl in this film—she wants nipples because a “real” girl has them. And, the scene with her showing off her breasts is the only actual nudity crosscut with a couple sex scenes. Just about everybody on this ship—the Grendel—is having sex with someone else. (The girl who was frozen along with Jason—who is presumably going to be the Final Girl—she is not having sex with anyone.) No teenagers (well, maybe a couple) but they’re all acting just like the teenagers in the usual slasher film. Really, there’s no particular reason for this film to be set in the future at this point. One way to bring Jason back to life is as good as another in this series. Plus, I’m finding myself comparing it to the original Alien. And, the aforementioned Hellraiser: Bloodline, which had a much better thematic reason to show the future in its storyline.

(Ha, the guy’s gun is a BFG—nice Doom reference.)

With all the guys with guns going after Jason, this is playing out more like something in the same vein as Doom, actually.

And then that level of the game ended. We’re back to a horror film. Jason even breaks through a window, an action which I think he has averaged more than once per film.

This movie echoes stuff from earlier entries in the series. Two sleeping bag kills instead of the the one in VII. An android instead of a telekinetic girl, also in VII. The student coming on to her teacher, like in VIII—only here, her advances are more welcome. Hell, students in general ties back to VIII. Jason’s mask at the bottom of the lake in the end also connects to Jason at the bottom of the lake, say, at the end of VI and his mask left behind at the end of Jason Goes to Hell. Plus campers who “love premarital sex” from, well, nearly every Friday the 13th film.

I realize I neglected to come back to the gender thing from above. The nipples thing, for example—this suggests that KM thinks women are defined specifically by their biology, their secondary sex characteristics. She has, of course, been programmed by KICKER, a male. He also, using her help, programs the diversionary campers. Rowan may be the only female here not specifically sexualized during the film, except we see her underwear being cut off of her.