maybe nobody knows how to stop him

Before I even get started with Halloween 4: The Return of Michael Myers, I gotta complain a bit about the DVD.

A) If I just rented or bought Halloween 4, you really don’t need to tell me all about the original Halloween before I watch it. Unless I just don’t understand Arabic Numerals, I’m guessing you realize this is a sequel and you got into this one—part 4—on purpose, so you don’t need an ad for the original.

B) If I am about to watch part 4, why the hell are you showing me an ad for part 5? SPOILERS much? I mean, I might as well just skip this one because I know the girl in the clown costume lives (though I don’t know who she is just yet), I know that Dr. Loomis makes it through this one, and so does Michael. So, screw the rest of this cast, let’s just move on to the next one. Seriously, either I already know part 5 exists (and, I do, have seen it more than once) and so I don’t need an ad for it just like I don’t need an ad for the original, or I do not know that it exists, in which case, let me watch this one in peace. Throw an ad for part 5 after the end credits if you want, but don’t diminish the role of this one before I’ve even got to it. 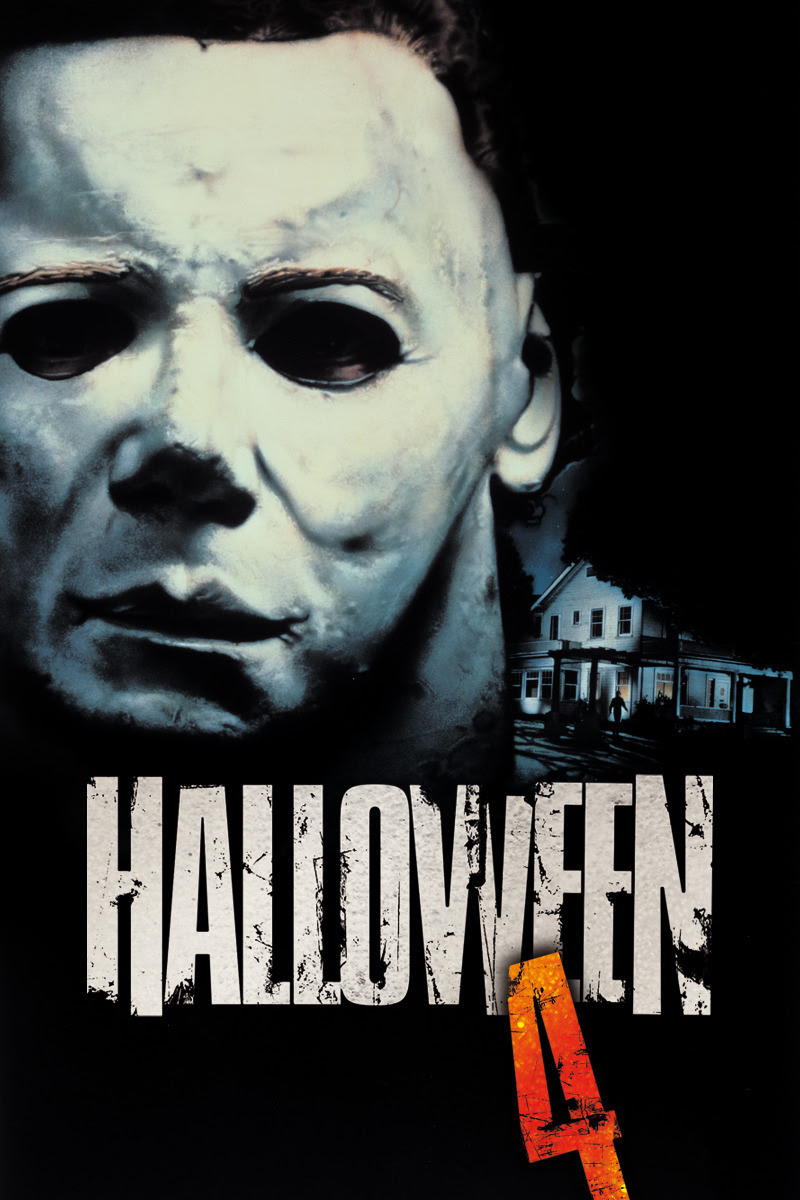 Now, the movie. My family, when I was growing up, was a Halloween family. I don’t mean that we celebrated the holiday, because we didn’t. But, we watched the movies, often. When this one came out, we were in the theater on the opening weekend—I remember seeing it on the date on screen at the beginning of the film, but we did see it several times while it was out, so I guess that was later. And, we were excited for this thing, as excited to have Michael back as we had been disappointed by III. This one has a great opening sequence, gradually getting us to Michael, and not starting with the theme music. Give us an attack—a fairly brutal one in the ambulance—then cut away to our new characters, Jamie and Rachel. It’s been 11 months since Jamie’s parents were killed in a car accident. And, Halloween II fans who shipped Laurie and Jimmy are assuming those two got together and had this kid. It’s a cheap out that we don’t get them, but the actors here do well enough that we don’t mind so much pretty quickly.

Then, the nightmare. Great setup, lightning flashing on Michael there in the room, then he’s under the bed, more like a fantasy of Michael Myers than any portrayal we’ve seen. And, that’s just what he is. Gotta wonder how many times Jamie has heard about uncle boogeyman.

Dr. Loomis makes a nice dramatic entrance—he’s got a nice limp, some burn scars and he refers to Michael as “it.”

There’s an interesting take on the end of the original Halloween that I read recently. It may have been on the IMDb boards. Dr. Loomis is very quick to shoot Michael repeatedly when he has no awareness yet of what Michael has done. Sure, he had killed Judith 15 years earlier, but the movie doesn’t even make it clear that Loomis saw the body of the mechanic whose clothes Michael took. Loomis doesn’t know that Michael has killed Annie or Lynda or Bob. He heard some screaming kids and walked in on Michael and Laurie. Sure, Michael is attacking Laurie, but what kind of a guy—especially a psychiatrist—jumps straight to shoot the guy six times? So then, at the service station on the way to Haddonfield here in 4, Loomis does take a moment to speak to Michael, but then in very little time, he’s back to shooting at him. Maybe if you just tried to talk to Michael, you might accomplish something. Not to get all touchy feely, but stop responding to his violence with your own and maybe he’d be less homicidal.

Or, you know, be a better shot.

And, yay, Lindsey and Tommy are still around. I’m sure plenty of fans of the original figured those two kids grew up to be a couple just like Laurie and Jimmy. Of course, they don’t even have a scene together.

Let us be glad that this film doesn’t go the easy route of having those kids who pretended like they’d pick up Dr. Loomis then drove off show up later to be killed. Like Melissa in Friday the 13th Part VII or Kelly later in this movie—it’s good to have at least one victim that the audience is happy to see killed; it helps really build up our culpability in the murders. But, a whole carload of jerks—that’s too easy.

The use of the child as the primary victim and Final Girl here—though Rachel is a close second—changes the equation a little. And, that shot of Michael’s hand tensing when he heard them mention his surviving niece in the ambulance really sets up the next two sequels. I’m not sure how much of the plot was planned, but these three (even if people liked them less as they went on) link together fairly well, setting up a reason for Michael’s murders. It’s not territorial like Jason’s, not for food like Leatherface’s, not for revenge like Freddy’s, but for something stranger. I’ll talk about it more when it comes out more explicitly in the later film, but for now, just now that Michael is set on killing his family, sacrificing the bloodline. Or something along those lines. Haven’t watched 6 in a while.

Rachel can’t even know that the guy she sees is Michael but she makes a run for it. Smart girl.

Multiple Michaels and Loomis again goes straight to his gun. The people of Haddonfield are lucky he doesn’t just shoot everyone in a mask.

Michael is quite systematic, by the way. Took out the ambulance folks, found himself a truck, found himself a mask. Now, he has checked out Jamie’s house, taken out the police and shut down the power around town.

These lynch mob guys from the bar are even more trigger happy than Loomis. Haddonfield is doomed.

Even twelve year old me wasn’t impressed by this Kelly Meeker girl. Sure, her t-shirt is clever—Cops do it by the book—but Rachel is cuter, smarter, more responsible. Liked her back then, and still do.

Deputy Logan is an idiot. Unless his squad car’s back door just has a habit of opening on its own, but that’s a detail that should be established ahead of time.

I’m gonna be outside, upstairs, in the attic. For some reason, that line has been a regular thing for me for... wow, 26 years since this movie was in theaters. It is surprising how useful that line can be.

Actually, the dynamic of sort of having two Final Girls in this film is an interesting one, even in Cloverian terms. Rachel comes across fairly motherly, but she also had intended to go out with Brady tonight. She should have been the one having sex with him instead of Kelly. This fits well with Clover’s (1992) version of the Final Girl, sexually frustrated, virginal (even if not deliberately). But, it contrasts with that motherliness. Her relationship with her adopted sister makes her quite protective, and in the classic mother bear feminine sort of way. Sheriff Meeker is similarly protective of his daughter, but in a more patriarchal, territorial way—he threatens to use the shotgun on Brady if he catches him groping his daughter.

Rachel doesn’t have a Final Girl kind of name—not exactly gender neutral. Jamie is, I suppose, but Rachel, no. In fact, Rachel’s tendency to run, to protect—she’s not Final Girl material at all. In a way, Halloween 4 backtracks into early slasher film territory—the original Halloween, the original Texas Chain Saw Massacre—with men having to come to the rescue. But, at least that means Rachel doesn’t have to turn violence against violence.

Seeing as how it takes the men to get the girls out of town, to take down Michael, etc., it’s interesting that Michael is pit against, effectively, the entire town, and mostly he wins. He is not just going after a few teenagers, he’s up against the police force and a lynch mob and they ain’t stopping him.

Ripping open the lynch mob dude’s neck with his bare hand might just be Michael’s most bloody kill in any of these movies. Well, not counting the floor covered in blood in Halloween II, anyway.

And, the ending. Dr. Loomis was going to shoot a little girl. That guy is cold.