do we get to win this time?

Winding down on Rambo--I gotta wonder if there isn't some (probably unconscious) juxtaposition between the prison at the beginning of the film, working the rock quarry, and the traveling POW camp group, working those prisoners harvesting crops. An enslaved group working the fields--no, that couldn't be worth exploring.

There are always topics left behind when limited to a week. Hell, I've still got things to say about Groundhog Day and I've watched that somewhere around 400 times (and will be watching it again a week from tomorrow). There is an implicit homoeroticism in how the camera loves Rambo's body (or John Matrix's body last week, John McClane's the week before, Martin Riggs' the week before that), but I've left that topic as maybe an occasional aside. I haven't written about how rude Rambo is to Ericson (Martin Kove), who seems genuinely excited to meet him. Lifer, on the other hand, is a bit of a dick. There's some room for a discussion about Buddhism--not just because of the ruined temple seen in the jungle. And, more. The line "Did not expect woman, no?" deserves a series of entries on its own. 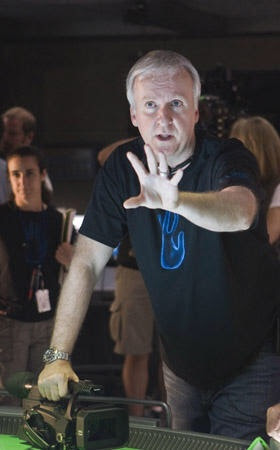 Today, though, James Cameron's script--First Blood II: The Mission. Generally, it plays a lot like the movie. There's a bit more setup before the mission gets going, there's a sidekick, and Rambo has no bow--which I think is actually quite significant--and the ending plays a little differently (but only a little differently). Cameron's usual line about how the script changed once Stallone took over writing, is that he wrote the violence and Stallone wrote the politics. Most of the politics comes right out of Cameron's draft, though. The basic plot is the same, revolving around the existence of POWs still in Vietnam. Now, what is missing is what is Rambo's big line at the end of the movie--

I want what they want and every other guy that spilt his guts and gave everything he had wants: for our country to love us as much as we love it.

--which arguably puts a big exclamation mark on the political message. Instead, at the VA Hospital (Rambo is retrieved from the "Neuropsychiatric Wing" of a hospital instead of prison. He's kept in a cell "that hasn't been used since the Spanish Inquisition" according to Doctor Singleterry, who also has a tranquilizer gun at the ready whenever he opens Rambo's door.), Trautman asks Rambo what he wanted (instead of his various military awards). Rambo replies, "haltingly":

Trautman's priceless response (because Cameron wasn't writing politics): "You just picked the wrong war to be a hero in." Rambo's conversation with Co about the "quiet war" at home is not in Cameron's draft, either, though, so I suppose Stallone did play up the politics a little from what was already there.

There's an interesting moment early in the script, just before Rambo leaves the hospital. All his belongings fit in a shoebox. The last thing he does before he leaves is dump the contents into the toilet and flush. Effectively, he leaves behind who he was before. This is just the first baptism in this story (in this script or the final one).

Then, there's Brewer. The sidekick. While his presence makes the first act a little more interesting, once they make the jump into Vietnam, he is superfluous. Ultimately, he serves very little purpose and I see why he was cut by Stallone. He was supposedly going to be played by John Travolta and there's an amusing meet-cute for he and Rambo accidentally sharing a taxi in Bangkok, but that's not enough to be worth including him.

Cameron's Rambo, like John Matrix (who really didn't need it), uses greasepaint to camouflage his face and hands. Cameron describes him, "dressed for the mission: tiger stripe cammies, jump pack, chute pack, hands and face mottled with camouflage greasepaint. Ferocious looking. Demonic" (p. 26). Rambo also darkens his knife blade by burning it over a candle, which... I don't know if that's a thing military guys actually do on covert ops, but it sounds cool.

As for Rambo's weapons, instead of being saddled with a pack of high-tech gear that he is forced by plot contrivance to drop someplace in the jungle, Brewer carries the extra stuff and remarks to Rambo, "Where's your stuff?" His small pack has some C-4, a map and a knife. Smartass Rambo quips, "There's a compass in the handle." He's also got a "beat-to-shit AK" and a crossbow pistol. (When he first finds the POWs, there's a Christ-Figure moment--

Rambo stands a few feet from them as if giving a benediction, the crossbow raised in one hand. (p. 53)

--proving that, yes, a bow works as a cross.) Rambo is not yet half Navajo--that's in Stallone's draft--so there is no larger bow, there to evoke the American frontier... but reversed. Anderson (2013) compares the settings of First Blood, Rambo: First Blood Part II and Rambo III to the American frontier myth. The backward savages who occasionally kidnap our people are no longer the Native Americans. On his website, David Morrell compares Rambo in the second film to a cowboy. That comparison is certainly invited by the story--this is American myth building, the rewriting of history to change a bad ending (our losing in Vietnam) into a good one. At the end of First Blood, Rambo tells Trautman," Somebody wouldn't let us win." That somebody is the liberals, the half the country soft on Communism, the hippies, and whatever Teasle and his people initially thought of Rambo, he is far from a hippie. Rambo is the conservative half the country who blamed the liberals for our loss and now it was time to fix that. The conservative Reagan years--our military didn't lose. And it didn't leave anybody behind. "Rambo gets America," Anderson writes (p. 21). Per my cultural artifact speech in 2009, Rambo is America.

But, back to Cameron.

Getting back to that "Did not expect woman, no?" line, there this bit about Co's name. She tells Brewer (after Rambo introduces her), "It means 'virgin.' My mother was comedian" (p. 39). Thing is, I can't find any evidence online that Co means "virgin." In Vietnamese, Co means either aunt/madame, or have/exist/hold/possess. I'm just going by Google Translate and a Vietnamese name guide, so if someone reading this speaks the language and I'm wrong, let me know, please. In Cameron's script, Co's full name is Co Phuong Bao. Phuong means direction/way and Bao means protection/security. So, on the one hand, Cameron has named her, essentially, madame guide and protector, which is nice... except for that virgin problem. Rambo's named (in part) after an apple (more on that, probably, tomorrow), so maybe Co gets the better deal, a more interesting name. Nevermind the sexist presumptions involved.

Continuing on that track, Co is initially described in Cameron's script as being "absolutely beautiful, with wide, calm eyes and strong but sensuous mouth" (p. 38) and she has "the delicate hands of a child" (p. 39). She is an embodiment of femininity and innocence next to Rambo. When they are on the riverboat, "Rambo watches Co, her face serene in sleep. Childlike. Beautiful" (p. 45). Keep in mind, this is the love interest. In this draft she not only suggests he take her back to America but that they get married. But, she's small; when she holds a .45, "It is enormous in her child's hand" (p. 59). On the one hand, she's hardly a woman. On the other hand, she manages to sneak up on Rambo on page 99, plus she's got a 12-year-old son who lives with her brother (she works for the "spooks" so that her ARVN Captain of a brother could get travel papers) in Huntington Beach, California. She hasn't seen him in 9 years. His father died in the war. She's a virgin on the one hand, small like a child, but also a mother. (Maybe I should have given Rambo the virgin Mary-Figure point, which would actually put him at 26/25.)

"John Wayne is dead, man," Brewer tells Rambo on page 51. But, cowboys clearly are not. In fact, Kirkhill (Murdock in the movie) says, "Rambo's gotta be a hero. Thinks he's starring in his own war movie or something" (p. 70). The only Vietnam War movie to come out during the war was the John Wayne-starring The Green Berets.

The first POW found--the unnamed Banks in the movie--is named David De Fravio in Cameron's script, and he's got some personality to him. He was separated from the other POWs (in "the box" in this draft, hanging on that rack in the movie) because he caught a cobra and put it in the guards' barracks. There's also a nice moment late in the script in which Brewer is trying to explain Star Wars to De Fravio.

Cameron's Russian commander, Podovsk (no Y in this draft), has a great line before the torture gets underway. He asks Rambo to provide information and Rambo stares off, ignoring him. Podovsk says, "Of course you won't. But, as a moral man, I felt compelled to ask." It's a nice moment for a character who has little to say otherwise.

To add to the Christ-Figure side of things, Cameron refers to a "godlike shaft of light [that] moves through the brush" behind Rambo on page 85, then the "celestial shaft of the searchlight" on page 86. Rambo is being watched over.

I mentioned the numerous baptisms Rambo undergoes. I mean, going back to the shower at the beginning of First Blood, Rambo is constantly being cleansed... well, I suppose the pool of excrement in this film isn't very cleansing, but visually, his emergence from the pool serves the same purpose. His final baptism in this film comes after the napalm is dropped. Instead of staying above the water, the camera is down below with Rambo. "The napalm on the surface lights the bottom orange despite the daylight. He seems suspended in a fiery maelstrom" (pp. 105-106).

The first part of the ending that plays differently is that Brewer takes out the bigger helicopter. Rambo's piloting skills make it possible, but he only gets the assist; Brewer makes the shot with the minigun on the side of the Huey. Now, since the minigun has been spent, Rambo is left with a much smaller weapon (an AK) when they get back to the base.

But, before they even get to the base, things work a little differently. Kirkhill (Murdock) actually orders Doyle (a mercenary pilot who doesn't make it to the next draft) to shoot down the Huey full of POWs. Murdock doesn't just want to hide their existence, he wants them killed outright. He says,

When the unidentified helicopter has crossed the river into Thailand, shoot it down with air-to-air rockets. Then proceed to the crash site and fire your remaining rockets into the wreckage. (p. 118).

"Mission Accomplished" plays with an AK pointed at Kirkhill's (Murdock's) forehead. Rambo pulls the trigger and it clicks. I would assume that Rambo knows he spent all its bullets on the door lock (he does not take out all the modern equipment with the gun), but I would guess a good portion of the audience could assume Rambo intended to kill Kirkhill (Murdock).

Finally, there is no coda with Trautman talking to Rambo. Instead, Brewer, taking pictures, says they'll be on the cover of Time. De Fravio tells Rambo, walking away, "You did good, buddy. Real good!" And, then this:

Rambo stands blinking for a second. He raises his hand in a big "thumbs up" and allows himself to grin.

Rambo's speech to Trautman may be a bit much, but I prefer the more serious ending to this corny one.