if i'm gonna get shot at, might as well get paid for it

The opening scene of Rio Bravo plays a bit like the opening of West Side Story, choreographed like there's a dance number coming. Instead, Chance (John Wayne) tells a guy he's under arrest. 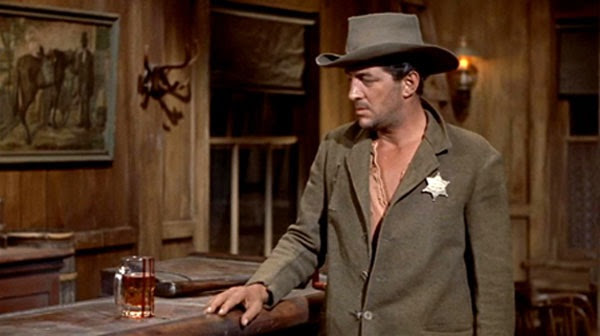 The Western has moved indoors over the last few films. Gunfight at the O.K. Corral, 3:10 to Yuma, The Left Handed Gun... it's remarkable how we think of Westerns as being about big, wide open spaces yet so many of them are a whole lot of dialogue until the situation explodes into violence. In a way, the more the Western stays confined to town, the more it plays like other genres, gangster films (or gang films more recently)... like West Side Story without the songs.

Then again, I've argued before that all movies are basically the same. Genre is just details.

Which is a weird thing to say when I'm only a week into this month of Westerns. Trying to build it up but I just can't help bringing it back down a little... How about a little Wright to set things right? (I really didn't mean for that to rhyme or echo or whatever you want to call it like that.)

Wright (1975) explains, regarding the professional plot:

The members of society are not unfair and cruel, as in the transition theme [of which there are so few films that I incidentally only ended up with one--High Noon--on my list of movies for this month]; in the professional plot they are simply irrelevant [here, symbolized by the often empty streets]. The social values of love, marriage, family, peace, and business are things to be avoided, not goals to be won. (pp. 85-86)

So, what purpose, then, does Feathers (Angie Dickinson) serve in this film? Is she a temptation, a distraction to pull Chance away from the task at hand? Is she the kind of love interest that seems tacked on in many another film? It's interesting that Carlos (the innkeeper) carried (or tried to) Feathers previously offscreen before Chance does so onscreen. Before she wouldn't be carried but now she will. Also, before she sat watch while Chance went to bed but we didn't see it, only heard about it afterward from Carlos. Here, we see here sitting watch (though, to be fair, she has dozed off). Later she throws a flowerpot through a window to distract Burdett's men for Colorado (Ricky Nelson) to help Chance... I don't remember all the details of where this is going--so many Westerns seen growing up they blend together a bit--but I'm hoping that Feathers will play an active role in the big climax of the film.

That being said, I'm fine with it if she remains a supporting character reminding us that Chance is human... In fact, Chance otherwise barely fulfills Wright's function #6 of the professional plot; he has no special ability except maybe a de facto authority that seems to surpass his badge. She doesn't seem superfluous except that I'm deliberately overthinking it. Wright tells us, "...the relations of the heroes, or of the villains, with society are minimal. Society exists as a ground for the conflict, an excuse for fighting, rather than a serious option as a way of life" (p. 86). Is Feathers a gambler to position her outside society? To make it clear that she and Chance cannot really be together?

As for the men--Chance, Stumpy, Dude, Colorado--they fit Wright's description of the group in the professional plot quite readily; "The interaction of the heroes," he writes, "is based on a mutual acceptance of highly unfavorable odds and a common coolness, humor, and wit in the face of danger" (ibid). I think that America was far enough out of World War II that the Western was no longer dealing in the post-war metaphor with Civil War veterans. Instead, we move into the professional plot. The Cold War has gotten started--the Berlin Blockade was a decade back--the Korean War is half a decade back. That High Noon (1952) and 3:10 to Yuma (1957) have specific deadlines in play and Gunfight at the O.K. Corral (1957) and now Rio Bravo (1958) have less obvious countdowns to confrontation in play suggests a subconscious allusion to the Cold War, perhaps. Violence is nearby, waiting. But, mostly, everything is okay. The Searchers' (1956) long search without resolution also lends itself to this idea. The Western has moved away from World War II into the Cold War.